As New Orleans Police Focus on Anti-Looting Measures in the Wake of Hurricane Ida, Some Residents Hear Echoes of Katrina

A damaged Louisiana State Police car is seen next to a destroyed house in Little Caillou, near Montegut, Louisiana on August 30, 2021 after Hurricane Ida made landfall. As Hurricane Ida made its way through Louisiana and Mississippi, the New Orleans police department prioritized the protection of property after announcing they would be deploying "anti-looting" teams in the city, something local activists have strongly criticized.
Mark Felix—Getty Images
By Josiah Bates

With Hurricane Ida having made its way through Louisiana and Mississippi, leaving behind a region flooded and in many places without power, some local residents and activists are directing their unhappiness at more than just the forces of nature.

On Sunday, as the Category 4 hurricane hit the city, New Orleans Police Superintendent Shaun Ferguson said that authorities would deploy “anti-looting” teams, and would “not tolerate” anyone trying to take advantage of the situation caused by the storm.

On Tuesday, Ferguson said New Orleans police have made several arrests for looting, and Mayor LaToya Cantrell enforced a citywide curfew to begin the same night. But, as people on the ground get their bearings in the wake of the storm, some say the focus on looting is misplaced—or worse.

“I have not seen any looting, any smashing, any aggression. I’ve seen people helping each other. I’ve seen people showing up for each other. I have not seen any [helpful] actions from the police,” Delaney Nolan, an activist with Southern Solidarity, a New Orleans-based community organization, tells TIME. “It’s pretty atrocious that [the police are] jumping to protect property.”

Some residents who have been displaced by the storm say the police would do better serving in other capacities. During the Sunday press conference, Ferguson made no mention of plans for the police to help civilians in the city. The New Orleans Police Department did not respond to TIME’s request for comment.

“If there were enough resources on the streets there wouldn’t be a need for anti-looting teams,” James Rose, a lifelong resident of New Orleans, tells TIME. “They should be focused on other things.”

“Every police station should have some type of tent set up where they can direct people on what they can do. That’s what their focus should be,” Brandon Releford, who’s lived in New Orleans since being displaced from Lake Charles after Hurricane Laura last year, says.

Others say the police have in fact been providing a helping hand. Terry Asevado, another lifelong New Orleans resident said that officers saw him walking after trying to get some supplies on Wednesday and gave him a ride to where he was going.

But there’s a reason why New Orleans residents might be primed to expect the worst from law enforcement in such a situation. In the immediate aftermath of Hurricane Katrina’s devastating the city in 2005, there were widespread reports of looting, shootings, violence and murder. However, these reports have since been discredited as exaggerated and inaccurate. In reality, thousands of mostly Black residents had stayed when the hurricane hit. They were without food, water and supplies. Many of them lost their homes.

Amid the narrative that these residents were looting stores and committing unnecessary acts of violence and property damage, the police presence in the city increased. The police were reportedly told by authorities to “shoot looters.”

New Orleanians in need felt they bore the consequences of that attitude.

In one notorious example, just six days after Katrina hit, a police shooting on the Danziger Bridge led to the killing of two unarmed Black civilians. The police were supposedly responding to a call of an officer being under fire and later tried to cover the incident up. Five officers involved later pleaded guilty to obstruction of justice, conspiracy, and civil rights charges.

Read more: How American Power Dynamics Have Shaped Perceptions of Looting, From the Boston Tea Party to Today

“I can’t help but think there are some spooky echoes of [Katrina] when officials are talking about looting,” Nolan, of Southern Solidarity, says. “Part of the damage that was done after Katrina was that there was a lot of fear-mongering and aggressive mistrust toward the people that stayed. There were all these rumors about looting and violence.”

The damage from Ida has not been nearly as devastating as it was when Katrina hit. So far, six people have died as a result of the storm in Louisiana, though that number could rise. But concern about what the police could do going forward remains high. The city is still without power and many homes don’t have running water. Law enforcement could decide that they need to keep order in the city, and some residents fear the potential results of that decision..

“[The police] just stand around holding guns, doing nothing,” Nolan says. “I’m concerned about what they might do.” 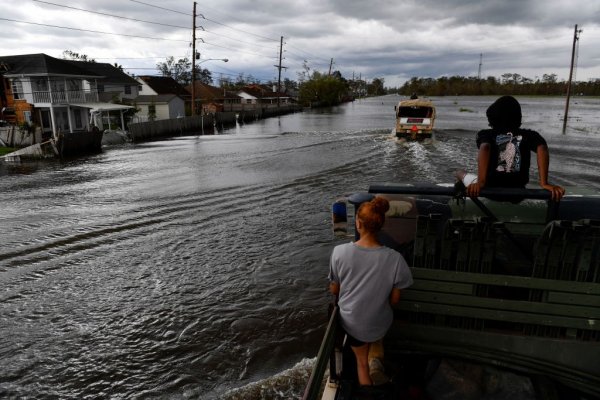 How To Help Hurricane Ida Victims
Next Up: Editor's Pick