An American flag flies near the Cathedral Basilica of the Immaculate Conception during a funeral mass for slain Boulder Police officer Eric Talley on March 29, 2021 in Denver, Colorado.
Michael Ciaglo—Getty Images
By Weihua Li and Ilica Mahajan

Since last summer’s Black Lives Matter protests, there’s a popular refrain echoing through urban police precincts, rural sheriff’s offices and city halls everywhere in between: Officers are fleeing America’s police forces in big numbers, officials say. And the timing couldn’t be worse, amid a rise in murders and shootings. Many argue cities must hire more police, but against the backdrop of nationwide scrutiny of police killings, morale has dropped to the point that few people want to be officers.

According to federal data, those worries are unfounded. Last year, as the overall U.S. economy shed 6% of workers, local police departments lost just under 1% of employees after a decade of steady expansion, according to the Bureau of Labor Statistics. That’s about 4,000 people out of nearly half a million employees in municipal police departments and sheriff’s offices nationwide. State and federal law enforcement departments actually saw a slight increase in the number of employees.

The push to hire more police is gaining ground. The Biden Administration recently announced that cities can use part of the $350 billion American Rescue Plan relief money to hire more officers to combat gun violence. Cities—big and small—are jumping on that offer, with claims that their police departments are running out of officers.

Many of the most worried officials have latched onto recent data from a non-scientific survey conducted by the Police Executive Research Forum think tank, that shows a 45% increase in the law enforcement retirement rate and other “dramatic” losses. The survey of 194 departments compares 2020 with the previous year, but 2019 came at the end of a long period of steady police job growth. Compared with the previous year, the 2020 numbers appear dramatic. Looking across the past decade, police employment in 2020 was roughly the same as in 2018.

Law enforcement’s employment numbers tend not to fluctuate dramatically. Policing is a secure job, according to Peter Moskos, a professor at the John Jay College of Criminal Justice, which explains the relatively small increase in retirements and resignations over 2020. Police jobs are often last on the chopping block when cities are considering budget cuts. Pensions and relatively high pay make it appealing to stay. Many of the officers who retired in 2020 were probably going to retire in a couple of years anyway, says Moskos, who suspects very few police would quit outright. Morale may be low, but, in Moskos’s view, that’s always been the case.

“They are financially locked in,” Moskos says, “If you quit, you don’t get your pension. Cops are human, too. They have a mortgage to pay. You can’t quit.”

Read more: Police Departments Struggle to Recruit Black Cops, So This HBCU Came Up With a Plan

Departments have rarely ever been at their authorized levels of staffing, Stinson says. He’s not surprised this has remained true given the events of the past year.

“From where I sit, it’s pretty much the status quo—it’s very difficult to change the culture of policing,” Stinson, a former police officer, says. “We’ve got more than 18,000 state and local law enforcement agencies across the country. It’s very difficult to legislate reforms that are going to have meaningful effect at the street level, at the local level, in all these agencies across the country.”

The debate over the future of police employment is also taking place amid a surge in gun violence and homicides that many places haven’t experienced for decades. While the official FBI data about crime rates last year won’t be published until this September, one estimate of preliminary FBI data shows the number of homicides rose by 25% from 2019 to 2020.

The rise and fall of violent crime rates are complicated to unpack, and it’s unclear if there’s a connection between police staffing levels and the rise in violent crime. Relatively little of police officers’ time is devoted to responding to violent crime, and in many places, police are unable to identify suspects in more than half of murder cases.

Factors that are seemingly unrelated to the criminal justice system may have also played into the increase in homicides since last year: Social safety nets like after-school programs disappeared or went online, gun sales skyrocketed, and so did the number of people who lost their jobs.

After the murder of George Floyd, there were unprecedented opportunities for cities to reimagine policing and experiment with community-driven violence prevention programs. But most local governments tend to stick with what they know, such as hiring more officers, says Amanda Kass, associate director of the Government Finance Research Center at the University of Illinois, Chicago.

Some cities are experimenting with new solutions. With so many police resources devoted to handling issues like mental health crises, cities from Missoula, Montana, to Chicago are exploring how civilian crisis response teams can handle 911 calls.

But most places aren’t trying such alternatives. Violence prevention programs take a lot more resources to create from scratch, “There is a difference between ‘building back’ and ‘building better,’” Kass says.

While the local police workforce dropped by less than 1% nationally, many departments are struggling.

In Denver, the disruption of COVID-19 and budget cuts will reverberate for years, says Denver Police Chief Paul Pazen, primarily because the police academies were canceled. It’s hard for police departments to rapidly increase their ranks because the hiring process takes months or years. Without the new officers, Pazen says his department is taking an average of two minutes longer to respond to 911 calls—which is especially concerning because of the city’s increase in homicides, shootings and serious domestic violence cases.

“We are holding things together with duct tape and chewing gum right now,” says Pazen.

Denver city councilwoman Candi CdeBaca is wary of this narrative from the police. She says Denver officers have been answering local complaints about crime with talk of how newly enacted laws and the defund movement are hamstringing officers. “We’ve got a department that is pretty good with spin,” she says.

Fewer than 17% of 911 calls in Denver are about violent crime, CdeBaca says, and responding to 911 calls makes up only about a half of the work that the department does. “Half of their work is self-initiated,” she says. “How about we just focus on what citizens are asking you to do?”

Some departments lost resources because of political actions stemming from the death of George Floyd and the ensuing racial justice protests. The Burlington City Council passed a resolution in 2020 to decrease the size of the police department, which is responsible for 44,000 residents in Vermont’s largest city, from 105 to 74 officers by attrition. Currently, 75 police officers work at the Burlington Police Department.

After excluding the supervisors, detectives and officers assigned to the airport, Burlington was left with 31 officers to patrol the city and respond to 911 calls 24 hours a day, according to acting Police Chief Jon Murad. As a result, the Burlington Police Department proposed a contingency plan to end patrol between 3 a.m. and 7:30 a.m., and to cut down on in-person responses to 911 calls. “It would likely take years to hire sufficient sworn officers to address the crisis we face,” Muard wrote in a letter to the Burlington City Council in January, as he was presenting the new safety plan.

Not every police department is facing hiring difficulties. Earlier this year, the New York Police Department saw more than 14,000 applicants take the police exam, according to Alden Foster, director of community affairs at the NYPD. On average, the NYPD received 20% more daily applicants than in previous years. This follows a police academy class that was canceled last year. Many of the applicants live in neighborhoods that experienced the most crimes last year, according to data from the NYPD.

Jason Vargas, who hopes of join the NYPD, poses for a portrait at his father’s deli in the Bronx.
Elias Williams

One of those recruits is 22-year-old Jason Vargas, who hopes to someday join what’s commonly known as the “hip-hop unit” of the New York Police Department, also known as the “enterprise operations unit” or “rap unit.” The unit is responsible for policing hip-hop shows and artists around the city. He’ll have to start on general patrol once he passes his NYPD entrance exam.

Vargas grew up in the South Bronx, where his father owns a deli. He describes his neighborhood as low-income and high-crime — his father’s deli has been robbed, he says. Since high school, Vargas has been determined to become a law enforcement officer. A May graduate from the John Jay College of Criminal Justice, the police murder of George Floyd and the subsequent protests did not deter him. “I believe there are good cops, and I feel like I can make that difference,” he says.

Many police departments across the country still insist Vargas is an outlier. Chuck Wexler, executive director at the Police Executive Research Forum, worries that “the job of being a police officer today simply isn’t as appealing as it has been in the past.”

But NYPD’s director of community affairs, Alden Foster, says the current recruiting situation couldn’t be better. “Actually, I see the complete opposite,” says Alden, who is a professor at John Jay and Vargas’ mentor. Foster believes young people want “to take the jobs still.”

Many of the customers that frequent his father’s deli have watched Vargas grow up. “All they’ve ever wanted was the best for me, cause a low-income community would want to see all of their members progress, you know?” he says. “So far, I haven’t encountered anybody telling me not to be a police officer.”

The original version of this story misspelled the last name of the acting Burlington Police Chief. He is Jon Murad, not Jon Muard. 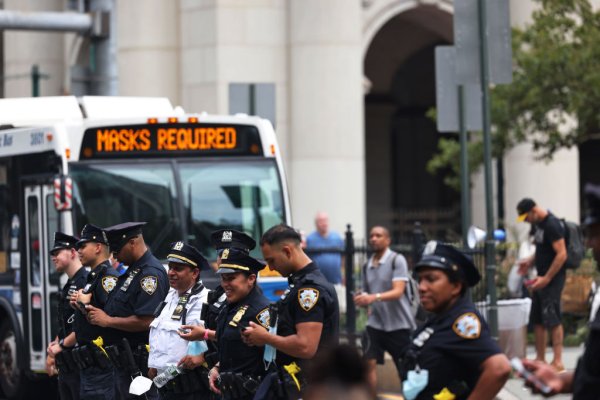