Bob Ross is an icon. Whether remembered for his soft voice, unforgettable hair, gorgeous landscapes or loose, fun approach to painting, the artist has remained indelible in popular culture since first appearing on PBS in 1983 as host of The Joy of Painting. Nearly 30 years after the show ended its 11-year run and Ross died following complications from lymphoma, his popularity endures, among both aspiring artists and ASMR fans, who turn on old Joy of Painting episodes just to bask in his calming presence. Bob Ross merchandise is everywhere—all over the internet, you can find everything from clothes inspired by Bob Ross artwork to plush toys and coffee mugs bearing the artist’s face. The question over who controls this legacy—and profits from the sales of Bob Ross merch—drives a new documentary that premiered on Netflix this week.

Titled Bob Ross: Happy Accidents, Betrayal & Greed, the name of filmmaker Joshua Rofé’s documentary suggests that Ross had a darker past than what he allowed viewers to see. But the film itself reveals little scandal about Bob Ross, the man (except, perhaps, to note that his famous afro was the result of routine perms). Instead, Rofé chronicles the fallout over Bob Ross, the brand, and follows the legal battles that grew over the rights to the Ross name after his death at the age of 52.

Weaving in footage of Ross painting, interviews with some former colleagues and accounts from Ross’ son, Steve, Rofé focuses much of the narrative of Happy Accidents, Betrayal & Greed on Ross’ financial backers and business partners, Annette and Walt Kowalski, and examines how they have maintained control of Ross’ likeness and name. Here’s what to know.

The fight for the right to the Bob Ross name

Happy Accidents, Betrayal & Greed begins with an overview of Ross’ rise as an artist who grew to moderate fame on PBS through his program in the 1980s and early ’90s. As the film shows, Ross joined the Air Force when he was 18 and developed his love for painting over his years in the service. After the Air Force, Ross taught painting, drawing inspiration from and working directly with the television painter Bill Alexander, who ran numerous workshops offering painting lessons.

Through teaching in Alexander’s workshops, Ross became acquainted with the couple Annette and Walt Kowalski. A lifelong fan and student of art, Annette took a painting class with Ross in Florida. “Mesmerized” by the then-unknown artist, as she shared in a 2019 New York Times documentary about the whereabouts of thousands of Ross’ original paintings, Annette and Walt took him under their wing and financially supported him as he became an independent artist.

As his backers, the Kowalskis were instrumental to establishing Ross’ deal with PBS for The Joy of Painting. And for years, the situation worked well for everyone involved: Ross drew in audiences with his genial, encouraging and ever chill vibe, while the Kowalskis were satisfied in helping an artist they had sensed was special. Later, through Ross’ work, the Kowalski’s helped to create Bob Ross Inc., through which they sold painting supplies and offered instructional videos. The company continues through this day, selling much of the merchandise that has cemented Ross as a popular modern figure.

But things grew sour over time, as the documentary posits that the Kowalskis became motivated by earning a profit off of Ross’ fame. Before he died, the Kowalskis pushed Ross to give over the rights to his name, according to the film. The battle grew uglier after Ross’ death in 1995, when the Kowalskis sued the Ross estate and family as part of an effort to exert total control over his name and likeness, according to both the film and a 2021 report from The Daily Beast.

Here, the documentary veers from a tale about Ross’ life and career to explore the ramifications of the Kowalskis assuming the rights to his legacy. The couple declined to appear in Happy Accidents, Betrayal & Greed, and the film depicts them as a litigious pair—to the extent that many people who worked with them and Ross refused to speak to Rofé out of fear of being sued.

Guiding the story, then, is Ross’ son, Steve, who appears in multiple interviews in the documentary. According to Steve, a painter in his own right who also appeared in numerous instructional videos, the millions of dollars Bob Ross Inc. has earned off his father’s name has only ever benefited the company and not his family. The film claims that Steve has never earned any money off his father’s likeness, although it alleges that Ross, prior to his death, had wanted his son and his half-brother to be in charge of his name. Steve Ross has tried to regain control of the Bob Ross name. In 2017, he joined a lawsuit attempting to get control of the name and likeness, but lost the fight to get sole rights when a judge ruled that Bob Ross Inc. was the owner.

Because it is missing accounts from many people who knew both Ross and the Kowalskis and could have provided helpful context, the claims that unfold in Happy Accidents, Betrayal & Greed can feel a bit uneven. Though neither the Kowalskis nor representatives of Bob Ross Inc. appeared in the film, they defended their actions in a statement to Vanity Fair ahead of the film’s release: “If not for the efforts of the remaining founders and their dedication to this mission, Bob’s artistic and cultural relevance—and his expressed desire to become the world’s most beloved painting teacher and friend—would have been lost decades ago with his passing,” they said.

In an Aug. 25 statement posted to the Bob Ross Inc. website, company representatives said they take “strong issue with the inaccurate and heavily slanted portrayal of our company,” adding that although the filmmakers had reached out for comment, “each request arrived replete with a confounding lack of transparency.”

“Had the filmmakers communicated with openness in their correspondence, Bob Ross Inc. could have provided valuable information and context in an attempt to achieve a more balanced and informed film,” they said. “However, as the director and producers carried on with the production without the perspective of Bob Ross Inc., the final narrative lacks considerable nuance and accuracy and carries a clear bias in favor of those who were interviewed.”

In many ways, Happy Accidents, Betrayal & Greed is a classic tale of a business relationship that started out strong only to fall apart due to bitter divides over money later on. And although it does not tarnish our collective view of Bob Ross—he remains, as ever, a symbol of calm, of accepting your mistakes as “happy accidents”—the film’s claims might cause some to pause the next time they consider buying a Bob Ross t-shirt.

The original version of this article misstated the number of lawsuits filed by the Kowalskis against Bob Ross’ estate in 1995. There was only one lawsuit, not multiple lawsuits. 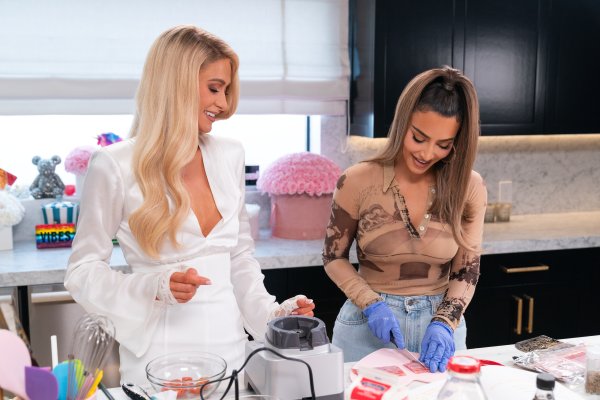 The Surprisingly Complicated Pleasures of Cooking With Paris
Next Up: Editor's Pick