From Stillwater to Sweet Girl, A New Crop of Movies Explores the Plight of Modern Dads

Photo Illustration By Nate Kitch for TIME
By Belinda Luscombe

“Fame is rot,” J.M. Barrie was purported to have said. “Daughters are the thing.” Of course, the creator of Peter Pan didn’t have any children, so he wasn’t exactly speaking from experience. For the crop of fathers of girls currently inhabiting our screens, daughters are actually quite a lot of trouble. There’s Chris Pratt, having to travel to the future to save his daughter from a bunch of gross aliens in The Tomorrow War. There’s Matt Damon in Stillwater, a working class guy trying to extract his daughter from a foreign prison. Sean Penn’s daughter just expects too much of him in Flag Day. And here comes Jason Momoa, whose child, the titular Sweet Girl, won’t let him fight the evil incarnate known as Big Pharma without her.

The father-daughter relationship has long been a staple of feel-good comedies and feel-sad weepies, usually featuring a preposterously cute female offspring teaching her father a thing or two about letting go, or girl-power, or what it really means to be brave or tough or despicable. But recently, the relationship has become fertile ground for action movies, with flawed fathers who go to extreme lengths to protect, rescue or secure their daughters, often to make up for some parental failing in the past.

These movies arrive at a transitional time for fatherhood. Long gone are the images of the stoic breadwinner or the heartless disciplinarian, and the bumbling Mr. Mom-figure is a joke that has worn wafer thin. But no new model of fatherhood has emerged as the dominant paradigm. There’s plenty of clarity about what fathers should not be, and a little less about what they should. “Men are kind of in this spot where they’re trying to hold on to things they consider to be important to their identities as men while also the parts of being a father,” says Sarah Schoppe-Sullivan, a psychology professor at Ohio State University, who studies fathers and wrote a recent paper on the history of fatherhood research. “There’s a real interest now in how modern fathers are sort of re-envisioning fathering roles in relation to masculinity and trying to combine these traditional ideas of what it means to be a man with more nurturing parenting of children.”

Some researchers have argued that because the role of father in heterosexual couples is less well defined than that of mother, it’s easier for it to seem less essential, and sometimes harder for dads to find their place. Indeed, as parenting duties expanded during the pandemic and the resultant stay at home measures, it quickly became apparent that although current fathers are much more involved in hands-on parenting than their own fathers were, gender roles on the homefront are resistant to disruption: mothers were still doing the bulk of the childcare, many of them—28% of moms compared to 10% of dads, according to one study—leaving work at least temporarily to do it. And then there’s the father vulnerability hypothesis, a current theory that suggests that a father’s relationship to his children is very tethered to his relationship with the child’s mother.

So perhaps it is no surprise that the screen fathers of the current era find themselves, like they might have in the delivery ward, at a bit of a loss as to how to be useful, and perhaps even superseded in importance by their offspring. Pratt’s former Green Beret Dan Forester is a much-loved high school science teacher who really wants to be in research. He adores his wife and daughter but is estranged from his own father, played by the forever watchable J.K. Simmons, a loner long on technical ability and short on pro-social impulses.

After Forester reaches the future, he realizes he is not the husband and therefore father he thought he was and that his daughter has succeeded beyond his wildest dreams despite—and not because of—his involvement in her life. He has to find a way to change his direction, while also wiping out aliens (spoiler alert: he crushes both chores, with help from his dad and his wife and the usual doomed black guy).

Research has long shown that fathers have a specific role in the raising of sons, but recent scholarship has also noted that fathers have a significant influence on daughters. “There’s pretty wide variation in terms of how much fathers invest in their kids,” says Danielle DelPriore, a Postdoctoral Fellow in developmental psychology at the University of Utah, who has studied daughter-father relationships, “and that variation is going to matter in potentially different ways for daughters and for sons.” Her research has found that fathers who are not present, or are present but not very engaged, tend to raise daughters who take up more risky sexual behavior and substance abuse. A textbook case of this dynamic is depicted in Flag Day, out Aug. 20, in which Sean Penn stars opposite his real life daughter, Dylan Penn, as John Vogel, an inveterate con man. In a cute reversal, Penn directs and plays a substandard dad in a movie that gives his daughter her biggest acting role to date.

But DelPriore’s research also shows that having a dad who’s around but who is harsh or distant, rather than warm and supportive, may lead to worse outcomes than an absent dad. “Quality,” she says “matters more than presence.” It’s advice that Jason Momoa’s Ray Cooper could have taken to heart. He’s a boxing trainer whose wife dies because of a pharmaceutical company’s greed and malfeasance—and because she has cancer. He vows revenge, but his violent actions threaten the safety of his daughter, Rachel (known also as Ray and played by Isabela Merced), whom he has previously trained, just coincidentally, in his no-holds-barred fighting techniques. Like 2019’s Leave No Trace—or even earlier dad-daughter films such as 2011’s Hanna—the father’s meticulous training of his female charge to become his clone-with-two-x-chromosomes proves to be a double-edged sword. These fathers are raising their daughters to fit their own world views, often to the girls’ detriment.

There’s a nostalgia in the current crop of films, for a simpler time when a father could distinguish himself, as Liam Neeson did in 2008’s Taken—arguably the forefather of the father-rescues-daughter genre—“with a very particular set or skills,” even if he is not the great provider or executive or hands-on nurturer. In the decade plus since then, researchers have documented the “fathering gap,” the difference in parental involvement between blue collar and white collar dads, partly caused by expectations at the workplace and partly by the hollowing out of the manufacturing industry which has left many men with fewer breadwinning options, and not sure where they fit in.

It’s no accident that nearly all the fathers in these movies are either working class or have stalled career dreams. The “useless” dad who suddenly became very necessary also popped up in 2014’s Three Days to Kill (Kevin Costner’s a dying hitman who saves his Parisian daughter), and later that year in Interstellar, where Matthew McConaughey abandons his family to go into space, gets stranded and has to somehow reach his daughter while adrift in time and the galaxies. Even when all is lost, what matters to these men is the welfare of their children. “It’s a horrible feeling,” Momoa said in an interview about Sweet Girl, “when a father can’t protect his family.”

Another recurring theme is the sense of guilt and shame with which these modern fathers struggle. “I need you to believe in me,” says Penn’s deceptive dad to his daughter, as he digs himself deeper into trouble to win back her trust. In the film, based on Jennifer Vogel’s memoir Flim Flam Man, Jennifer comes to believe her father’s mendacity is “wedded to his shame and disappointment.” Similar emotions haunt Stillwater’s Bill Baker, Matt Damon’s unemployed Oklahoman oil rig worker with God-guns-and-guts sensibilities. He flies to Marseilles, France, to visit his estranged daughter, Allison (Abigail Breslin), who has been in prison for several years after the highly-publicized murder of her girlfriend. Despite the effort he makes, it’s clear she has low expectations of him.

While there, with the aid of a single-mom experimental theater actress (those crazy French!) and her spunky kid Maya, he tries to find a way to exonerate Allison. He forms the kind of bond with Maya that he never had with his own child, because of his prior alcoholism and general absenteeism. He picks her up from school, teaches her how to use tools, learns French from her, takes her to sports events she loves.

It’s very hard, especially right now, not to see Baker’s hamfisted and unknowing attempts to rescue his daughter as a commentary on American incursions on foreign soil in the name of providing justice or rescue. He lacks the local knowledge to understand the situation he’s confronted with. Those who know what’s up do not wish to help, those who wish to help have dubious motives and those who do help pay a high price. In the end, Baker makes the situation worse for nearly everyone, especially those he leaves behind.

But Stillwater, and to a lesser extent the other dad movies, also reflect the cost of modern, fear-driven parenthood, in which one’s own child is of vastly more value than other humans. Pratt’s Forester cannot rescue his daughter without rescuing everyone. Ray Cooper and Jennifer Vogel survive but their fathers’ actions have left them damaged. And in trying to save his child, the well-meaning Baker endangers the welfare of an even more vulnerable child, and obliterates any chance he has to do actual fathering. He realizes too late that his obsessive focus on his daughter has blinded him to the bigger issues—and that a world in which one’s own child’s future becomes more important than others’ is not one in which anyone can thrive. 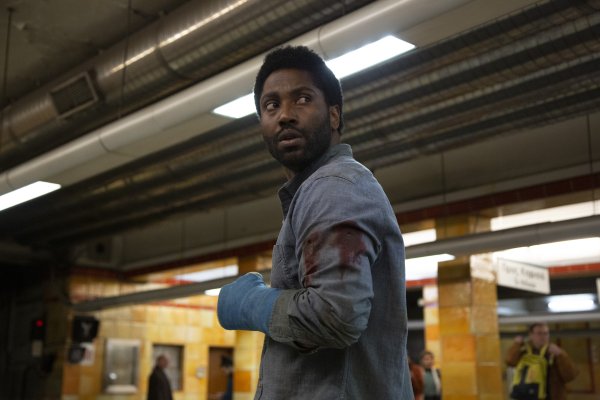