Europe Sees a Migration Crisis in the Making in Afghanistan. Have the Lessons of the 2015 Surge Been Learned?

Migrants at a camp in Rudninkai in Lithuania hold up placards with inscriptions such as "Help Afghanistan" and similar demands during a rally on Aug.16, 2021
Alexander Welscher—dpa/picture alliance via Getty Images
By Charlotte McDonald-Gibson / The Hague

Reshad Jalali was nine years old when U.S.-backed forces ousted the Taliban from Kabul in 2001, and vividly remembers the crackle of Afghan singers on the radio for the first time, a relative’s jubilation at shaving his beard, and a swelling of optimism all around him. “We said we are done with the Taliban, another chapter in Afghan history starts now,” he recalls.

But after that initial elation came a series of disappointments in both botched Western nation-building and corrupt Afghan governments, and his family eventually fled for Europe in 2006. Now Jalali faces his biggest disappointment of all, watching the Taliban return to the streets of his home country while many in his adopted continent appear more consumed by the potential for another refugee crisis, rather than in the fate of the Afghan people.

“As an Afghan living in Europe, I’m shocked at what I have heard,” says Jalali, who now lives in Brussels and works as a Policy Officer at the European Council on Refugees and Exiles, a collective of NGOs. “I was expecting the E.U. to stand in solidarity with the people of Afghanistan rather than focusing on the narrow topic of migration.”

A mix of compassion and fear towards refugees

The European Union has a huge stake in Afghanistan’s past and future, given than most E.U. member states are also NATO allies and they have together pumped €4 billion in development aid into the country. How its leaders now respond to the prospect of rising numbers of Afghan refugees will be a key test of how the bloc has absorbed the lessons of 2015, when the Syrian civil war sparked a movement of more than 1 million people into Europe.

So far, the European response has oscillated between compassion for the fate of ordinary Afghans trapped under Taliban rule, and fear at the potential consequences at home. This was typified by French President Emmanuel Macron’s speech on Monday evening, when he spoke about both the need to “protect those who are in the greatest danger” and “protect ourselves against large migratory flows”.

The tone had been set earlier in the month, when the Netherlands, Germany, Belgium, Austria, Denmark, and Greece sent a letter to the E.U. executive urging them to continue deportations of Afghans with rejected asylum claims, arguing that halting expulsions “sent the wrong signal”.

The insensitivity of the letter at a time when the Taliban were marching on Kabul sparked outcry, and some signatories backtracked. But it was reflective of the increasingly hostile policies in place since 2015, when Europe’s mismanagement of the crisis caused a surge in support for far right and nationalist parties.

This new security-driven approach has seen E.U- backed missions accused of returning people to life-threatening situations in Libya and illegally pushing back boats which had reached Greek waters.

Afghans arriving in Europe bore the brunt of many of these harsher policies, with leaders reasoning that fatigue had set in about the “forever war” and Afghans could be sent back without much outcry. Between 2015 and 2016, the number of people returned to a country at war by E.U. member states tripled to nearly 10,000, and in some cases, people forcibly returned to Afghanistan were killed within months of arriving.

It is through this prism that the Taliban takeover is viewed in much of Europe, with fierce debate over the likelihood of another refugee crisis. Former Portuguese diplomat Bruno Macaes, writing in Politico, claimed another refugee wave “now seems inevitable”, citing Afghan diplomats who told him: “nothing can stop them – not even tanks”.

The key differences with 2015

So far there is little evidence of such an influx, says Camille Le Coz, a policy analyst with the migration think tank MPI Europe. She points out there are key differences between the situations in Syria and Afghanistan — not least the far greater geographical distance a person has to travel to reach Europe from the latter.

She also warns that such scaremongering can play into the hands of the populists, as well as the authoritarian governments eager to exploit Europe’s fear of refugees. The E.U. recently asked Iraq to stop its flights to Belarus, amid evidence that its dictatorial leader, Alexander Lukashenko, was flying Iraqis to his capital then bussing them to the border with Lithuania in retaliation against E.U. sanctions.

Belarus was following the example of Libya, Morocco, Russia, and Turkey, which have all exploited the migration issue to wield influence or punish the E.U. and its member states. “All the countries neighboring the E.U. border know this is a vulnerable spot, this refugee question, so this is an easy way to exert pressure,” Le Coz tells TIME.

History is poised to repeat itself with the Afghanistan situation. Turkey, which receives E.U. funding to stop people heading for Greece, is already positioning itself, claiming that the numbers of Afghans crossing its border with Iran are increasing and insisting that it will not bear the burden of housing them.

Le Coz says the Turkish statements on new arrivals should be treated with caution, and a more important discussion needs to take place between the E.U. leadership and Iran and Pakistan, which already host 2.6 million Afghan refugees and will bear the burden of a new, long-term exodus.

One of the drivers of the wave of migration to Europe in 2015 was the lack of support for Syrian refugee populations in Lebanon, Jordan and Turkey, a situation that German Chancellor Angela Merkel recently acknowledged, stressing that “we should not repeat the mistake of the past”.

But while Jordan and Lebanon then had good relations with the E.U, Le Coz points out that “the relationship with Pakistan and Iran is a lot more complicated.” The latter is still under heavy economic sanctions by the E.U., while Pakistan’s growing closeness to China has strained relations with Western nations.

Another question is who agrees to resettle Afghan refugees who do enter Europe, legally or illegally. This is one area where the lessons of 2015 have not been learned; despite pledges from some European nations, E.U. member states remain as divided as ever over the issue of migration, and have failed to agree on a new strategy for the redistribution of any new flows of people despite six years of debate.

“We should have learned from the past crisis and be mobilized to swiftly react to the situation now,” says Reshad Jalali. He agrees that supporting displaced people in Afghanistan and the surrounding region is key, but also points to measures that could be implemented immediately within the E.U, including approving all pending asylum decisions for Afghans, speeding up family reunions, and creating more pathways for resettlement.

All these measures should be put in place because it is the right thing to do, not out of self-interest, he says. “The immediate focus should be on how to save lives, how to provide protection, and how to prevent another humanitarian crisis, not another migration crisis.” 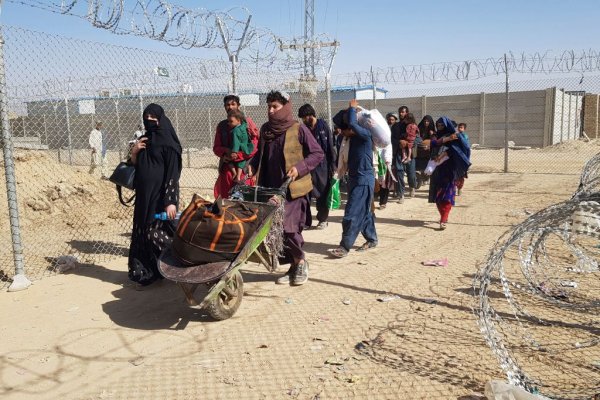 Afghans in Pakistan Fear for Refugees Fleeing Taliban
Next Up: Editor's Pick