Europe is Betraying Afghanistan By Sending Its Refugees Home

A family stands by her container on May 11, 2017 at Malakassa refugee camp, some 50km north of Athens where around 700 refugees, mainly from Afghanistan, wait their fate
Louisa Gouliamaki—AFP/Getty Images
Ideas
By Anna Shea

“If Norway had believed us, my husband would be alive today,” Sadeqa tells me. She had fled to Norway with her family in 2015 after Hadi, her husband, had been kidnapped and beaten, but Norwegian authorities rejected their claim for asylum and returned them and their children to Afghanistan. A few months after their arrival, Hadi was killed. Sadeqa and her three young children are living in constant fear.

Sadeqa is one of thousands of Afghans who have been returned from Europe to Afghanistan in the last two years. They are sent back despite evidence that people are at real risk of serious human rights violations in a country that has become even more dangerous since they fled.

A new report by Amnesty International, released today, details harrowing cases of Afghans who have been returned from Norway, the Netherlands, Sweden and Germany only to be killed, injured in bomb attacks, or left to live in constant fear of being persecuted for their sexual orientation or because of their religion. In 2016 alone, almost 10,000 Afghans have been put in harm’s way.

Afghanistan is deeply unsafe, and has become more so in recent years. Currently, the government and its security forces are battling more than 20 armed groups operating across the country, including the Taliban and the group calling itself the Islamic State. The UN Assistance Mission in Afghanistan reported that 2016 was the deadliest year on record for civilians, with 11,418 people killed or injured, and the deterioration in the security situation has persisted into 2017. Kabul is the most dangerous province in the country, accounting for 19% of civilian casualties in 2016.

In defiance of common sense and common humanity, this is the country to which European countries are sending thousands of Afghans back. As security risks increase, so do returns. Between 2015 and 2016, the number of people returned from Europe to Afghanistan nearly tripled: from 3,290 to 9,460 (pdf).

Farid, who was deported to Kabul last May from Norway, is in danger of religious persecution for converting to Christianity. He left Afghanistan as a child, grew up in Iran, then fled to Norway. He is terrified about what will happen to him. Still in shock after being wrenched from his adopted country and faith community, he told me: “I feel like I’ve fallen from the sky. I don’t believe I’m here.”

A year ago, on Oct.5 2016, the Brussels Conference on Afghanistan hosted representatives from 75 countries and 26 international organisations and agencies. The European Union (E.U.) and its member states committed to providing the government of Afghanistan with approximately €5 billion in aid. Also at the conference, the E.U. and Afghanistan signed a document called the “Joint Way Forward,” which aims to facilitate the return to Afghanistan of Afghan citizens in Europe.

The Joint Way Forward opens with the assertion that the E.U. and Afghanistan each “face unprecedented refugee and migration challenges. Addressing them requires solidarity, determination and collective efforts.”

But whilst true solidarity on the part of the European governments would be welcome in Afghanistan, the refugee and migration challenges experienced by the E.U. and Afghanistan are simply not comparable.

Recently, brutal conflicts and crushing poverty in many parts of the world have pushed large numbers of people to seek asylum in Europe: more than 1 million desperate women, men and children arrived irregularly in 2015, with about 200,000 of them being Afghans. But these numbers must be compared with the numbers of refugees being hosted – sometimes for decades – in countries with far fewer resources than most European States. Of the 2.5 million Afghan refugees worldwide, for instance, the vast majority – about 2.28 million – live in Iran and Pakistan.

Meanwhile, Afghanistan itself faces a staggering internal displacement crisis. The country’s Internally Displaced People population will almost certainly exceed 2 million people by the end of 2017. Moreover, in recent years increasingly hostile conditions for Afghan refugees in Iran and Pakistan have forced hundreds of thousands of people back to Afghanistan. At the same time, hundreds of thousands of others have fled the country in fear for their lives.

The E.U.’s so-called refugee crisis is rooted not in the number of refugees arriving, but in the way many European politicians insist on outsourcing responsibility to countries with far fewer resources. Europe does not lack the ability to fulfil its legal obligations towards people fleeing the horrors of war and persecution. The average GDP per capita of E.U. countries far exceeds that of major refugee hosting countries like Pakistan, Lebanon and Kenya.

Clearly, notwithstanding the Joint Way Forward’s rhetoric of solidarity, the document is intended to pressure Afghanistan into accepting large numbers of returnees. A leaked E.U. document (pdf) from March 2016 is frank on this point. In it, E.U. agencies acknowledge Afghanistan’s “worsening security situation and threats to which people are exposed,” as well as the likelihood that “record levels of terrorist attacks and civilian casualties” will increase, but nevertheless state that “more than 80,000 persons could potentially need to be returned in the near future.”

Afghanistan’s Minister of Finance, Eklil Hakimi, has been quoted telling the Afghan parliament: “If Afghanistan does not cooperate with E.U. countries on the refugee crisis, this will negatively impact the amount of aid allocated to Afghanistan.” A confidential Afghan government source called the Joint Way Forward a “poisoned cup” that Afghanistan was forced to drink in order to receive development aid.

Evidently the “Joint Way Forward” is neither joint, nor a way forward. Afghanistan is currently too dangerous a place for returns. Until European governments and the EU acknowledge this, the lives of tens of thousands of Afghans in Europe remain uncertain. For others, it is already too late. “I’m so afraid,” Hadi’s widow told me. “I can’t even bring my children to their father’s grave.”

Names in this article have been changed. 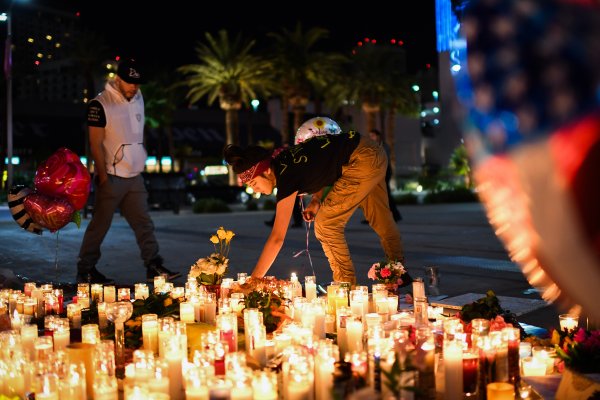 To Las Vegas, With Love From Orlando
Next Up: Editor's Pick