'Ultimately We Have Chosen Defeat.' British Lawmakers Condemn Decision to Follow U.S. Out of Afghanistan After Fall of Kabul

Taliban fighters took control of Kabul on Monday, bringing an end to a period of almost 20 years when the country was run by a national government supported by the United States.

The rout of the Afghan army came just weeks after the last U.S. troops exited the country. But the American war effort in Afghanistan was supported by 23 other countries, chief among them Britain, which sent more troops to Afghanistan (more than 100,000 in total) than any other country except the United States.

Most British troops exited alongside American soldiers in July, after the U.K. government decided it did not want to remain in the country without U.S. support. “Clearly, once the U.S. decision was made, our view was that it would not be right to act unilaterally in this as an occupying force,” a spokesperson for Prime Minister Boris Johnson said on Monday.

Anger at governments in Washington and Westminster

In London, political recriminations were flying on Monday as it became clear that two decades of British presence in Afghanistan, much of which was spent training the Afghan military, had resulted in defeat. Much of the criticism came from lawmakers within Johnson’s own Conservative Party.

“This withdrawal was literally like pulling the rug from under the feet of the Afghan security forces,” said Johnny Mercer, a lawmaker for the ruling Conservative party who served as a defense minister until April, in an interview with TIME on Monday. “Learning those skills and the will to fight takes a long time. It’s a decades-long project, and ultimately we have chosen defeat.”

Mercer also raised questions about what he said was Britain’s inability to deviate from U.S. foreign policy. “If we can’t do anything without the Americans, then we have a serious problem,” said Mercer, who served three tours in Afghanistan as a British Army officer. “Clearly the Americans bear the largest share of the blame, but we were the second biggest troop-contributing nation to Afghanistan,” he said. “Could we have done something? Of course we could.”

“In my view, Biden has made an appalling mistake,” he said. “We clearly have to find a way to operate without [the U.S.] … in Britain’s interests, not just as a 51st state.”

Meanwhile, the families of some of the 457 British personnel who died in Afghanistan described a sense of betrayal. “It is all such a waste. Twenty years of sacrifice in blood and treasure has come to nothing,” said Hazel Hunt, the mother of 21 year-old Richard Hunt, who died in Afghanistan in 2009, according to the Times of London. “All that has been achieved has been so quickly dissipated. Their sacrifice has been for nothing.”

While many U.S. observers likened the scenes in Kabul to the 1975 fall of Saigon, the go-to comparison in the U.K. has been the Suez crisis of 1956, when Britain was forced to cancel an invasion of Egypt under pressure from the U.S. The strategic blunder is widely perceived to symbolize Britain’s decline as a global military power.

“The fall of Kabul is [Britain’s] biggest foreign policy disaster since Suez,” wrote the chair of Parliament’s foreign affairs committee, Tom Tugendhat, in an op-ed. Britain suffers from an “inability” to operate independently of the U.S. military, the Conservative member of parliament (MP) said. “The redeployment of 2,500 US troops … ended 20 years of British effort in Afghanistan and left thousands of British citizens under Taliban jurisdiction.”

The U.K. Parliament, which is currently suspended for its summer vacation, will reopen to discuss the situation in Afghanistan on Wednesday. But MPs from the ruling Conservative Party will not be compelled to attend by the party leadership. “U.K. foreign policy is missing in action,” tweeted Tobias Ellwood, another Conservative lawmaker and former soldier, in reaction to the news. He called the crisis “our biggest foreign policy failure in a generation.”

Amid calls for Britain to open its doors to refugees fleeing the Taliban, the British government was forced to deny reports on Sunday saying it was “reluctant” to give asylum to people fleeing Afghanistan “because of the message it will send to other refugees.”

“We have obligations to Afghanistan, we made promises to Afghanistan and we cannot walk away and let this turn into a humanitarian crisis, probably a refugee crisis as well,” said the leader of the opposition Labour Party, Keir Starmer. “There is a real risk that international terrorism will take hold again in Afghanistan, so we can’t walk away and undermine the legacy of the last 20 years.” 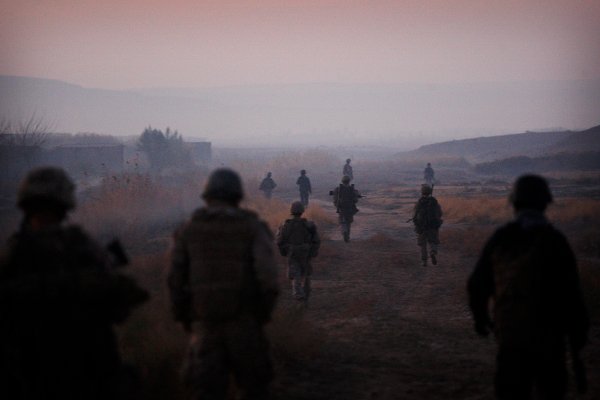 How the 20-Year War in Afghanistan Has Changed the U.S. Military
Next Up: Editor's Pick