How a Diplomatic Spat Shook Up Biden's First Day in the U.K.

President Joe Biden’s first full day of his eight-day overseas tour got off to a wobbly start as a diplomatic row between the U.S. and U.K. over trade inspections in Northern Ireland erupted into public view—just as Biden was preparing to sit down with British Prime Minister Boris Johnson.

The two leaders wanted the day to be focused on their renewal of the 80-year-old Atlantic Charter that codifies the countries’ long-standing alliance. Instead, a British news report that the U.S.’s top diplomat in the U.K. delivered a pointed rebuke over how Johnson’s government is handling Brexit in Northern Ireland hung over the meeting.

At issue is the Biden Administration’s concern that the U.K.’s treatment of Brexit negotiations with the E.U. on border inspections between Northern Ireland and the Republic of Ireland could destabilize the troubled border and test the foundations of the 1998 Good Friday Agreement. That agreement ended three decades of fighting in Northern Ireland between largely Protestant unionists who want to stay with the U.K. and Catholic nationalists wanting to be part of the Republic of Ireland.

The message delivered by the U.S. Chargé d’Affaires Yael Lempert before Biden’s arrival in the U.K. was not a démarche, or formal diplomatic rebuke from Biden, as was reported, according to a White House official, but a laying out of long-standing U.S. concerns. White House officials said Biden wants to ensure that Brexit trade negotiations between the U.K. and the E.U. do not threaten the Good Friday Agreement or the two-decades of progress stabilizing the border, and that Biden planned to bring that up in his meeting with Johnson.

Biden did not, however, go into his meeting with Johnson planning to be “confrontational or adversarial,” a senior administration told reporters before the two leaders met. Biden “came merely to communicate what he believes very, very deeply about peace in Northern Ireland, about the priority the United States places on that, about the priority Joe Biden places on that,” the official said.

The two leaders showed no sign of tension on June 10 as they walked, each holding hands with their wives, Jill Biden and Carrie Johnson, along a deck in Carbis Bay at the southwestern tip of England. Minutes later, the two leaders walked into a meeting room overlooking the waters of St. Ives Bay and reviewed a display of historical documents and photographs from the signing of the original Atlantic Charter in August 1941.

When they sat down, a table made from a tree stump between them, Biden said he’s visited Johnson’s “great country” many times, but this was his first time as President, and that he was “thrilled” to be there and “thrilled” to meet Johnson’s wife. “I told the Prime Minister we have something in common: We both married way above our station,” Biden said, smiling. Johnson played along. “I’m not going to disagree with the President on that or indeed on anything else, I think, either, likely,” Johnson said. “I think we are so generally agreed, Joe, we could probably do this in public.” Aides then proceeded to firmly push reporters from the room.

Biden often reflects on his dearly held Irish roots and has sometimes been critical of British history on Ireland. During his first press conference as President in March, Biden had pointed words about British colonial rule there. Talking about how he understands why immigrants flee home, Biden said his family migrated to the U.S. to get away from brutal British actions in Ireland. “When my great-grandfather got on a coffin ship in the Irish Sea, expectation was, was he going to live long enough on that ship to get to the United States of America?” Biden said. “But they left because of what the Brits had been doing— they were in real, real trouble.”

In public, at least, Biden seemed to be willing to set those sentiments aside in Carbis Bay. After their private 90 minute discussion, Biden said he and Johnson had a “very productive meeting” that “revitalized” the Atlantic Charter to address the key issues of the age, including climate change, cyber security, and the global pandemic. “We affirmed the special relationship—that is not said lightly—the special relationship between our people,” Biden said, launching into U.S. plans to take a leading role in helping other countries vaccinate their populations and contain the coronavirus.

Johnson also downplayed any tensions over Brexit and Northern Ireland. “One thing we all absolutely want to do—and that is to uphold the Belfast Good Friday Agreement,” Johnson told reporters after talking to Biden, “and make sure that we keep the balance of the peace process going. That’s absolutely common ground, and I’m absolutely optimistic that we can do that.”

Both leaders will attend the G7 Summit on Friday and through the weekend, which brings together seven of the world’s largest economies—the U.K., Canada, France, Germany, Italy, Japan and the U.S.—, as well as India, South Korea and Australia, to discuss points of cooperation. (India’s Prime Minister Narendra Modi will attend meetings over video as India grapples with its large numbers of COVID-19 cases.) Getting a handle on the global pandemic is a major thrust of this year’s G7 Summit, and Biden has framed his effort there as trying to demonstrate that the world’s democracies can solve tough problems at a moment when autocratic governments have grown more influential. 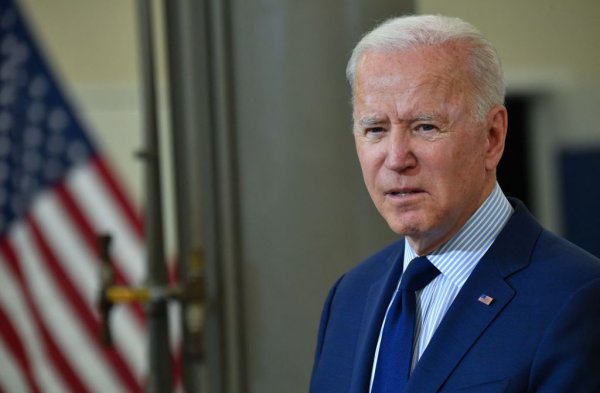 Inside the Biden Administration's Response to the Spike in Anti-Semitic Attacks
Next Up: Editor's Pick