Tokyo Was the First COVID-19 Olympics. It Won’t Be the Last

The Toyko Olympics will be remembered not for its closely fought battles for gold, or feats of superhuman athleticism, but for the COVID-19 measures athletes had to endure in order to compete in the middle of a pandemic. And it won’t be the last Games shaped by the virus. The next start in just six months in Beijing—with even more rigorous anti-virus rules being discussed.

“I expect Tokyo’s experience will certainly color how the Chinese prepare for Beijing 2022, the French for Paris in 2024, the Americans for Los Angeles in 2028,” says J. Stephen Morrison, the director of the Global Health Policy Center at the the Center for Strategic and International Studies (CSIS), a Washington-D.C.-based think tank. “It requires an entire change in mindset to guarantee disease surveillance and control as a costly, complex, exhausting lead priority for organizers.”

China has taken a zero tolerance approach to COVID-19, with tight border controls to prevent the import of the virus, and draconian lockdowns and mass testing to conquer flare-ups. Although organizers haven’t yet revealed the full extent of the safety measures for the Beijing Olympics, it’s clear that China’s tough stance will carry through to the Games, which run from Feb. 4 to Feb. 20.

Read More: I’m a Health Writer Who Covers the Olympics. Here’s What I Thought of the Tokyo Games Bubble

Tokyo organizers relied on frequent testing, masking wearing, social-distancing measures and isolation bubbles, but Chinese authorities look set to go even further. Beijing organizers are reportedly considering measures like utilizing all-day armpit thermometers, preventing athletes from having any contact with referees and journalists, and requiring Chinese staff to live in a bubble and go through quarantine to “re-enter” China post-Games, according to the New York Times. Beijing has said that it will allow less than 30,000 people in for the Games, according to the Times. (By comparison, more than 40,000 people entered Japan for the Tokyo Olympics). Athletes will naturally be subject to strict quarantine measures on arrival.

Workers wearing personal protective equipment (PPE) help transport deliveries of food and other necessities from couriers to residents of a neighborhood placed under lockdown, after a resident recently tested positive for COVID-19, in Shanghai, China, on Tuesday, Aug. 3, 2021.
Qilai Shen—Bloomberg/Getty Images

COVID-19 and the Olympic Games

Vaccination rates are trending upwards in rich countries, but vaccine inequality remains a serious problem. Although 31% of the world’s population has received one dose of a vaccine, only 1.2% of people in low-income countries have had a jab. “It is going to take several years to sort all of this out,” says Morrison. “Those low and middle income countries, which lack vaccines and readiness, are going to struggle with not just uncontrolled transmission in 2022 and 2023 but also the cascade of economic insolvency, dramatic increases in poverty, humanitarian emergencies and social instability.”

The virus might be with us for a long time. The research journal Nature asked more than 100 experts working on the coronavirus whether it would ever go away. Almost 90% of respondents said they thought that the coronavirus will become endemic—meaning that it will continue to circulate in pockets of the world’s population for years to come.

Read More: Will the Coronavirus Ever Go Away? Here’s What One of the WHO’s Top Experts Thinks

The continued circulation of the virus, and the mental trauma of the pandemic, may change how big global events like the Olympics are run, how global travel is undertaken and the way that people behave in crowds.

The 2002 to 2003 SARS outbreak in Hong Kong provides an example of how a virus reshaped a community. Practices and habits implemented during SARS, which killed nearly 300 people in the city of 7.75 million, have remained a part of normal life in Hong Kong. Incoming travelers have long had to pass body temperature scanners at the airport before entering the city and the use of hand sanitizer has been ubiquitous for almost 20 years. Surgical masks are a common part of life, and it’s normal for anyone with a mild sniffle to wear one to work or on public transport.

Some experts, however, say that it’s unlikely that the strict measures used in Tokyo, and under discussion for Beijing, will become a normal feature of the Games in years to come.

Ben Cowling, an infectious disease epidemiologist at the University of Hong Kong, says that he thinks that only a handful of countries, including China, might continue their zero COVID-19 strategies, as much of the world attempts to return to normal. That means future Olympics may not face the same kind of strict measures that athletes competing in Beijing are likely to.

Read More: Sleepless Nights, Hotel Room Sprints, So Much 7-Eleven: What It’s Like to Cover the Tokyo Olympics

Says Cowling: “I don’t think there will be special countermeasures by the time of the 2024 Olympics in Paris.”

But others stress that the virus is something event organizers will have to live with. “I don’t think that anyone should be under the impression that we will be able to eradicate or eliminate the virus that causes COVID,” says Tara Kirk Sell, a former Olympic athlete and a senior scholar at the Johns Hopkins Center for Health Security.

She adds that it’s impossible to know at this point what precautions might still need to be in place by the 2024 Games, but she’s confident that organizers will be able to devise the right safety plan. “The IOC has some really smart mass gathering experts working with them,” she says. 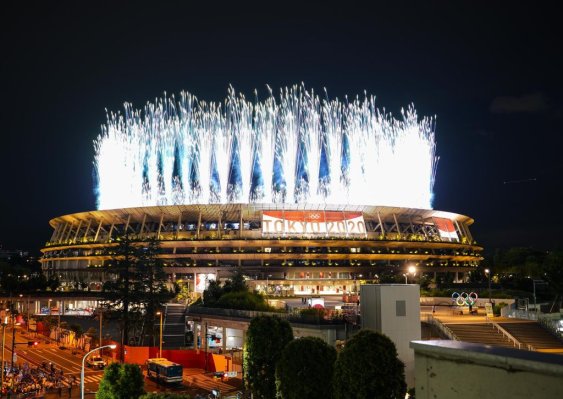 Even With No Tourists or Fans, Japan Is Already Seeing Economic Benefits From the $15.4 Billion Tokyo Olympics
Next Up: Editor's Pick