As Some Governors Forbid Mask Mandates, Schools Are Pushing Back

The start of the school year has revived polarization over masking, as students head back into classrooms while the Delta variant spreads and children under 12 remain unvaccinated. School districts in states where Republican governors have prohibited mask mandates are beginning to defy those orders, arguing it’s a necessary measure in the face of an “urgent crisis.”

“This is a temporary solution to a situation that has gotten very grave,” Dallas Superintendent Michael Hinojosa said of the mask requirement at a press conference on Monday, describing pandemic conditions as “significantly more urgent” due to the highly contagious Delta variant.

“I am responsible for the safety, health and welfare of each and every one of our students and our staff,” Stephanie Elizalde, superintendent of the Austin ISD, said at a school board meeting on Monday. “If I err, I must err on the side of ensuring that we’ve been overly cautious, not that we have fallen short.”

In a statement, Abbott’s office said “the time for mask mandates is over” and parents should be able to decide whether their children wear masks in school or not. But judges on Tuesday blocked Abbott’s order, at least temporarily, for schools in Dallas County and Bexar County, which includes San Antonio.

Read more: Schools Expected to Leave Virtual Learning Behind, but the Delta Variant Is Forcing a Change of Plans

Young children are still less likely to get seriously ill from the virus, but coronavirus cases among children are increasing. And just 29% of 12- to 15-year-olds in the U.S. were fully vaccinated against COVID-19 as of Aug. 4, according to an American Academy of Pediatrics analysis of Centers for Disease Control and Prevention (CDC) data. Children under 12 are not yet eligible for COVID-19 vaccines, leaving schools to depend on other precautions—including masks, physical distancing and ventilation—to keep children safe from the virus.

The CDC recommended in July that all students and staff wear masks inside schools, regardless of vaccination status. But eight states, including Florida and Texas, have banned schools from requiring masks, according to a tracker by Burbio. Ten states, including California and Oregon, have issued masking requirements for schools. Others have left the decision up to local school districts.

The use of masks has been polarizing throughout the pandemic, but most parents of school-aged children (63%) think their child’s school should require unvaccinated students and staff to wear masks at school, according to a Kaiser Family Foundation survey published Wednesday. But parents are divided along partisan lines, with 88% of Democratic parents saying their child’s school should require masks, while 69% of Republican parents say they should not.

In Florida, which has seen a sharp increase in pediatric coronavirus cases with dozens of pediatric hospitalizations, the issue has devolved into a partisan showdown. Republican Gov. Ron DeSantis issued an executive order in July that effectively prohibited mask mandates in schools, arguing it was a matter of parental rights. This week, he threatened to withhold the salaries of superintendents or school board members who impose mask requirements.

In response, Democratic lawmakers in the state urged school superintendents to defy the executive order and follow CDC masking guidelines, vowing to launch a GoFundMe campaign to cover their salaries if necessary. “If the Governor chooses to defund public education and withhold salaries from educators as punishment for protecting students’ health and safety, we will fill the gap to support them in this fight,” State Sen. Lauren Book, the Democratic leader, said in a statement.

Alberto Carvalho—superintendent of Miami-Dade County Public Schools, the largest school district in the state—said he would consult with public health experts and make a final decision about masks without the Governor’s input. “At no point shall I allow my decision to be influenced by a threat to my paycheck; a small price to pay considering the gravity of this issue and the potential impact to the health and well-being of our students and dedicated employees,” Carvalho said in a statement.

Several other Florida school districts, including Broward County, Leon County and Alachua County, have already announced they will require masks. “I value life too much to take chances with the lives of others, even under the threat of retaliation,” Carlee Simon, superintendent of Alachua County Public Schools, wrote in the Washington Post on Monday. “As our school board chair has so aptly put it, better a loss of funding than a loss of lives.” 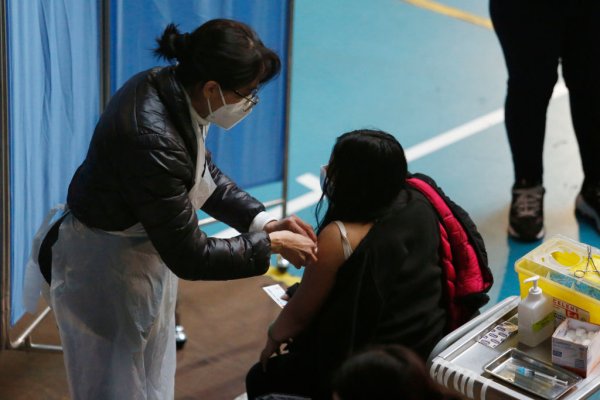 Should Anyone in the U.S. Get COVID-19 Booster Shots?
Next Up: Editor's Pick