Update, Aug. 13: The U.S. Food and Drug Administration on Aug. 12 said immunocompromised individuals in the U.S., such as those who have received organ transplants or have certain types of cancer or other illnesses can get a third dose of either the Pfizer-BioNTech or Moderna COVID-19 vaccines to boost their immune responses. That extended authorization applies only to immunocompromised individuals; booster shots have not been recommended or authorized for the general public at this time. Read more here.

Chris Neblett, 44, was among the first people in the U.S. to get vaccinated against COVID-19. His job with the U.S. State Department allowed him to get his initial dose of Pfizer-BioNTech’s vaccine in late December 2020. By January 2021, he was fully vaccinated.

But that didn’t mean he was fully protected. Neblett, who received a kidney transplant in 2018 and still takes immune-system-suppressing drugs to prevent his body from rejecting the organ, found out through his participation in a Johns Hopkins study of vaccination among transplant patients that he didn’t produce any disease-fighting antibodies, even after two shots. He felt stuck.

So in April, with the blessing of his transplant team, Neblett went to a public vaccination site in Virginia and got a third Pfizer-BioNTech dose. Neblett never mentioned that he’d already had two doses, and because his initial shots weren’t given through the state of Virginia, he didn’t appear in its database.

After that third dose, Neblett did produce some antibodies—not as many as most people would after a full course of vaccination, but some.

Experts are divided on whether Neblett’s decision was the right one. Many U.S. doctors who care for immunocompromised patients say yes, since they are particularly vulnerable to severe COVID-19 and need protection, particularly as the Delta variant spreads. In countries like Germany and France, officials have already said they will offer booster doses to vulnerable people, including the immunocompromised and elderly. But the World Health Organization this month asked wealthy countries to hold off on giving booster shots, since much of the world is still struggling to secure and administer first doses. Though the U.S. Centers for Disease Control and Prevention’s (CDC) advisory committee is set to meet this week to discuss booster shots, they have not yet been authorized in the U.S.

That leaves people like Neblett with lots of questions and few answers. “Our community,” he says, “is kind of forgotten.”

Neblett’s community includes the roughly 4% of Americans whose immune systems don’t function at full capacity. In addition to transplant patients, this group includes cancer patients treated with certain forms of chemotherapy and people who take immunosuppressants to control a range of autoimmune diseases—conditions like rheumatoid arthritis and lupus that cause the immune system to mistakenly attack healthy cells. People with some genetic disorders, or chronic conditions like HIV/AIDS, also may have weakened immune systems.

Immunocompromised people can’t get certain vaccines that contain live viruses, because they pose too high a risk to their weakened immune systems. And even shots that don’t contain live viruses—like those authorized for COVID-19—may not work as intended among members of this population. As is standard, immunocompromised people were excluded from COVID-19 vaccine makers’ clinical trials, so no one knew exactly how much (or little) of a response they would have until the shots became available.

Early research suggests there’s a huge amount of variation from person to person. Dr. Dorry Segev, a transplant surgeon at Johns Hopkins, is leading the study Neblett enrolled in. His research suggests that about half of transplant recipients mount zero antibody response after COVID-19 vaccination, and even those who produce some antibodies do not make as many as a person with a fully functioning immune system. Another study posted on MedRxiv, a hub for research papers that have not yet been peer-reviewed, found that just 55% of blood cancer patients produced antibodies after their vaccination, whereas more than 80% of solid-tumor-cancer and autoimmune-disorder patients did. About 98% of healthy control subjects made antibodies after getting their shots.

It’s not clear exactly how many antibodies are required to provide immunity against the virus—nor are antibodies the body’s only immune defense—but Segev says immunocompromised people are decidedly at risk. His research suggests a vaccinated transplant patient is 82 times more likely to experience a breakthrough infection than a member of the general public. Another study posted to MedRxiv found that, out of 45 people in the U.S. hospitalized with a breakthrough infection in the spring of 2021, 44% of them were immunocompromised.

“It’s frustrating and frightening for transplant patients to be out in the world, knowing that they’re not nearly as protected as people with normal immune systems,” Segev says.

Dr. Westyn Branch-Elliman, an adjunct professor at the Boston University School of Medicine who co-authored a recent op-ed in support of boosters for the immunocompromised, says offering extra doses to certain groups would not only protect the vulnerable, but also the wider U.S. population, since higher levels of vaccine coverage mean fewer people would get sick and transmit the virus.

Immunocompromised people looking for extra doses are low-hanging fruit in the effort towards herd immunity, Branch-Elliman says. U.S. officials are expending a huge amount of energy trying to convince vaccine skeptics to get shots, while people who have already proven that they want vaccines—but who did not reap their full benefits—are practically begging for extra protection.

But Segev says crafting booster recommendations could be tricky at a policy level. His research shows that some immunocompromised people do produce antibodies after an extra dose—but some still don’t. Early research suggests certain drugs or types of organ transplants are particularly likely to dampen the immune response, but it can be difficult to predict who will or won’t respond to a booster. Issuing a blanket recommendation means some patients may use up a dose and still not gain any protection. And since each vaccine dose revs up the immune system, Segev says each shot comes with a small risk of things like organ rejection or disease flare-ups for patients who take immunosuppressants.

That hasn’t stopped countries like Germany and France from recommending extra doses to the large swath of people they consider “vulnerable,” including the immunocompromised. But as WHO Director-General Tedros Adhanom Ghebreyesus said in a recent statement, such policies introduce another problem: supply.

More than 80% of the COVID-19 vaccines administered globally have already gone to people in rich countries. The WHO argues that giving extra doses to people in rich nations while millions of people around the world haven’t gotten any protection is an equity issue.

“I understand the concern of all governments to protect their people from the Delta variant,” Tedros said in his statement. “But we cannot accept countries that have already used most of the global supply of vaccines using even more of it.”

Disparities in vaccine access are undeniably a huge problem—but people like Jen Myers, a Colorado-based epidemiologist who also has an autoimmune disease, can’t help but feel “forgotten and left behind” when health officials talk about vulnerable people as though they’re as protected as the rest of the population.

Myers, 44, says she’s considered seeking out a booster shot on her own, but hasn’t done so because she wants there to be a good system for collecting data on the effects of extra doses. The National Institutes of Health is currently funding studies that address that question, including one run by Segev, and the CDC is trying to track people who get unauthorized booster shots—but there are untold numbers of people who slip through the cracks.

“If people just go rogue, we aren’t really going to be able to track those outcomes—are there side effects, do the boosters work?” Myers says. “We need to do this in a good, scientific fashion.”

For now, she says, she’s waiting for officials at the FDA and CDC to come out with strong guidance for immunocompromised people—not just so she and others in her position can decide whether to get an extra shot, but also so the general public understands the unique risks they face.

“Immunocompromised people matter,” she says. “This is not over for us.” 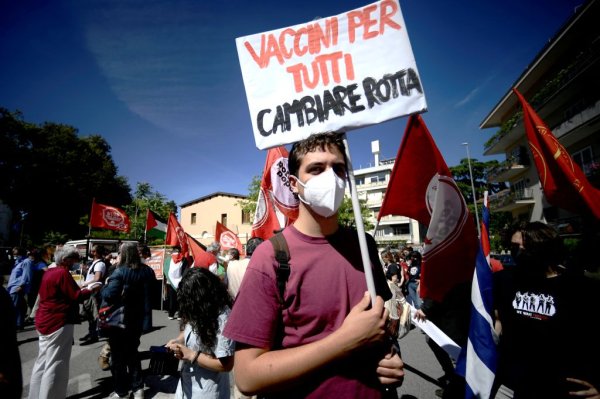 Here's a Model for Global Cooperation on Vaccines
Next Up: Editor's Pick