What You Need to Know About COVID-19 Booster Shots

Since the U.S. began a massive country-wide vaccination effort against COVID-19 last winter, a majority of adult Americans have been immunized. But now it seems that all of them may need an additional dose next year.

Public health experts including Dr. Anthony Fauci, director of the National Institute of Allergy and Infectious Diseases, stress that studies continue to show that the three vaccines currently authorized in the U.S. protect against COVID-19 disease, including against variants of the virus that are more transmissible. But as effective as the vaccines are, they can’t provide 100% immunity against disease. There is also early evidence that part of the immunity generated by the vaccines—specifically the antibodies created to stick to and block SARS-CoV-2 from infecting cells—could start to wane after about six months.

That’s why researchers are now studying whether adding an additional dose after about a year could boost levels of immunity back up. For the two-shot vaccines from Pfizer-BioNTech and Moderna, that would involve a third dose, while for the single shot Janssen/Johnson&Johnson vaccine, it would mean a second jab.

Is a booster dose necessary?

Pfizer-BioNTech reported in July that early studies involving people who were given a third dose about six months after their second dose showed strong antibody responses five to 10 times higher than levels after two doses. Based on those results, the companies have requested that the U.S. Food and Drug Administration (FDA) approve a booster dose of its vaccine.

While the vaccine makers are understandably eager to sell an additional dose of their shots, the FDA said in a July 8 statement that boosters for the U.S. are premature at this point. “FDA, [Centers for Disease Control], and [the National Institutes of Health] are engaged in a science-based, rigorous process to consider whether or when a booster might be necessary…We are prepared for booster doses if and when the science demonstrates that they are needed.”

Will the booster dose be another dose of the same vaccine?

Both Moderna and Pfizer-BioNTech are studying different versions of their vaccines as a possible third dose, while J&J is studying the effects of a second dose of its existing vaccine. Pfizer-BioNTech’s July study involved another dose of the existing vaccine, but the companies are also investigating whether adding an additional dose of a new vaccine they’ve developed, specifically designed to target the Beta variant, will improve protection as well.

Moderna is testing three different third dose strategies: a half-dose of the existing vaccine, an additional dose of a new vaccine that targets the Beta variant, and another dose that combines the existing and Beta variant shots.

In May, Moderna reported that serum from people given the half dose of the existing vaccine neutralized SARS-CoV-2 variants at levels similar to or higher than those against the non-variant strain. And neutralizing activity of the other two boosters, which are more targeted against the Beta variant, was higher against that variant than was a booster shot of the original vaccine. Those studies, as well as the others, are continuing and won’t likely be completed until late summer or fall. When those results are available, the FDA will review the data to determine if the added protection warrants authorizing or approving an additional dose.

In July, Israeli health officials announced that it would provide a third dose of the Pfizer-BioNTech vaccine to people with weaker immune systems, including those undergoing chemotherapy or people with immune-related conditions such as HIV. The decision was based on increased cases of Delta infections in the region, and data from the Health Ministry showing that protection from getting infected with any version of SARS-CoV-2 among people vaccinated with two doses of the Pfizer-BioNTech shot dropped from 95% to about 64% after several months.

When will I know if I need another dose?

In the U.S., the FDA will review the data submitted by the vaccine makers to decide if a booster dose is necessary. The agency will weigh the strength of the data showing how much another dose might add to protection against both infection and severe disease against potential side effects. For the Pfizer-BioNTech and Moderna shots, those potential complications include a very small risk of inflammation of the heart tissue, especially among younger people. For the J&J shot, it includes both a slightly higher risk of developing blood clots and Guillain-Barré syndrome, an auto immune condition in which the immune cells attack the body’s nerve cells.

The agency will also likely consider the state of the pandemic; specifically, whether the threat of new variants, including Delta, calls for the need for another dose.

If I need a booster, where can I get one?

It’s not clear yet where the booster doses, if they are authorized, will be distributed. Mass vaccination centers sponsored by the federal government have been closing as the majority of American adults have received at least one dose, but resources are shifting toward more local sites including doctors’ offices, pharmacies, community health centers, hospitals and mobile vaccination units. For now, a White House spokesperson said health officials are focused on ensuring that more Americans get at least the currently authorized doses before turning their attention to booster shots. 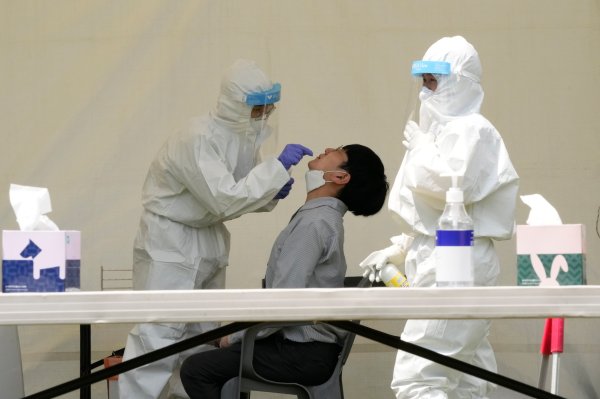 Delta Coronavirus Variant Sweeping Across Asia
Next Up: Editor's Pick