Even With No Tourists or Fans, Japan Is Already Seeing Economic Benefits From the $15.4 Billion Tokyo Olympics

With a volley of fireworks at National Stadium, the Tokyo Summer Olympics ended with a bang. In economic terms, though, it felt more like a whimper.

The Olympics cost Japan at least $15.4 billion, making them the most expensive summer Games ever, according to a study by University of Oxford researchers. The cost for the 2008 Beijing Olympics is widely cited as being more than $40 billion, though the researchers found most of the spending was not directly related to the Games.

The 17-day Tokyo Olympics were held without foreign tourists or even domestic fans amid a COVID-19 state of emergency during which Japanese officials urged people to stay home and bars to close early amid skyrocketing infections. This means the usual ways that host countries make up the cost of Olympics spending aren’t on the table.

Critics have called the Tokyo Olympics a write-off, but the Games have generated some benefits and can’t be called a total loss.

Takahide Kiuchi, executive economist at Nomura Research Institute, a think tank, projected that the short-term economic benefits of the Games would be $16.4 billion in June, when many in Japan were advocating for canceling the Tokyo Olympics. He lowered that to $15.2 billion due to restrictions on spectators. That’s far below some rosy predictions.

“A few years ago, the Tokyo city government estimated the economic legacy of the Games at 12 trillion yen or $109 billion. They expected foreign spectators would be frequent visitors to Japan and accelerate inbound demand. This estimation was clearly overstated because foreign spectators were not allowed,” says Kiuchi. “However, I still expect some economic legacy to materialize. Hotels and restaurants spent money on renovations for the convenience and comfort of foreign tourists. I think this is one of the economic legacies of the Games and it will contribute to attract foreign tourists to Japan.”

The huge costs associated with holding the Olympics has sparked backlash in recent years, with Boston and Budapest withdrawing their bids for the Games amid local opposition. Brisbane’s recent winning proposal for the 2032 Summer Olympics—the only bid to reach a final vote—included a pledge to fund the organizational budget entirely from private sources.

As a result, whether Japanese taxpayers and businesses feel they’ve gotten good value for the money invested in the Olympics could factor into whether future cities decide to bid for the Games.

Here are some less obvious ways the Tokyo Olympics have already generated economic activity in Japan.

One of the biggest recipients of Olympics economic activity is the construction industry. The Kengo Kuma-designed, 68,000-seat National Stadium and seven other venues were built for the Olympics, costing about $3 billion; 25 other facilities were renovated. After the Games, the stadium will be used for soccer and rugby matches, as well as cultural events. The athletes’ village, surrounding roadwork and infrastructure, cost some $490 million and will be converted into apartments.

The COVID-19 pandemic not only delayed the Olympics by a year, adding about $2.8 billion to the price tag, but the alarming spread of the delta variant in Japan led authorities to ban spectators from nearly every event. Those who were shut out watched the competitions on the internet and television, and some splurged on big screens. One hot item was 65-inch organic light-emitting diode (OLED) TVs. Electronics retailer Bic Camera tells TIME it saw a 30% increase in sales of OLED TVs in July compared to the previous year.

Huge new interest in some sports is also generating economic activity. One example is skateboarding. Yuto Horigome dazzled fans with his seemingly effortless moves at Tokyo’s Ariake Urban Park when he took home the first-ever Olympic gold medal in the sport in the men’s street skateboarding final. Sakura Yosozumi, Kokona Hiraki, and Sky Brown, three girls born in Japan, took all the medals in the women’s park skteboarding final.

The high-flying youths have added jet fuel to a skateboarding craze, which got rolling earlier on in the pandemic as a way to get outdoors and exercise while social distancing. It’s bringing more and more skaters to the streets and skateparks of Tokyo.

“We’ve seen more people getting into skateboarding, kids and adults alike, especially recently because of the Olympics,” says Koichi Hirooka, manager of Murasaki Park Tokyo, a skateboard park in Tokyo’s Adachi Ward. “Before the Games, foreign athletes like Nyjah Huston were a big influence, but with Japanese winning medals I expect skateboarding will become a major sport in Japan.”

Another benefit may accrue from the stellar performance of Japan’s female athletes. Including its skateboarding girls, Japanese women were on the medals podium a whopping 33 times, out of the record 58 medals for the country. Women also claimed 15 of the 27 golds.

“I believe this will not only encourage more females to pursue athletics, but I hope these female athletes serve as role models to show Japanese girls and women that anything is possible and barriers are made to be broken,” says Kathy Matsui, a former Goldman Sachs vice chair known for coining the term “womenomics” in male-dominated Japan to promote the economic benefits of empowering women.

In the latest World Economic Forum Global Gender Gap Report, Japan ranked 120th out of 156 countries. It has made some progress, however, and Matsui has written about how closing the gender employment gap could boost Japan’s GDP by 10%.

Even with the Olympics’ $15.4 billion official price tag, the portion shouldered by taxpayers is a tiny fraction of heavily indebted Japan’s $1 trillion state budget.

Only time will tell whether it was money well spent. 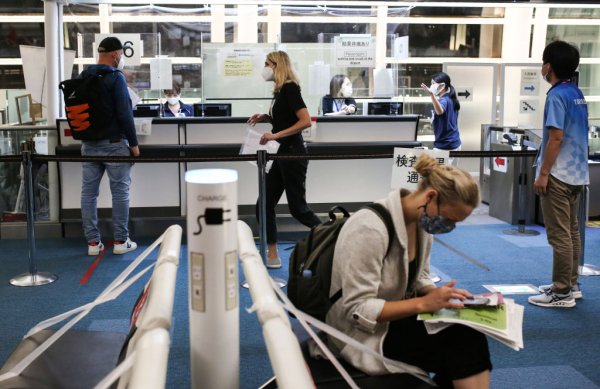 I’m a Health Writer Who Covers the Olympics. Here’s What I Thought of the Tokyo Games Bubble
Next Up: Editor's Pick