Skateboarding has a new king, and Japan has another fine reason to cheer these troubled Olympics. Yuto Horigome, 22, who served notice that he was a threat by winning at the Street Skateboarding World Championships in June, earned the sport’s first Olympic gold medal in the sweaty heat on Sunday at Tokyo’s Ariake Urban Park.

When skating during his runs, Horigome almost looks effortless: Was he really trying? Falls in the finals didn’t faze him. After putting in middling initial runs, he landed four monster tricks—including one he said he had never tried in a competition before. And, when he knew he had the gold wrapped up, he threw his skateboard into the air.

At a press conference after the win, Horigome seemed to acknowledge just how huge the moment was for his sport. “I would like to communicate the beauty of skateboarding going forward,” Horigome said through an interpreter.

American Nyjah Huston, the heavy gold medal favorite and great hope to lift U.S. skateboarding to new heights, finished seventh. He needed to pull off miracle slides and flips on the rail at the end, but Huston kept falling. And falling. His sponsors, like Nike and Monster Energy, and American broadcaster NBC were banking on Huston, who’s already won more prize money than any skater in history, to break into a mainstream Olympic star—like Shaun White and Chloe Kim before him. He’ll have to wait another four years, when he’s 30, for his next shot.

“When you’re doing tricks that are that technical, flipping and spinning your board onto a rail, it’s hard to get it right every time,” said Huston after the event. “Coming into it I was really excited, also really nervous. I’ve never felt so much pressure, from representing your country, too. All the people back home and all the homies, I’m sorry, I know I definitely let some people down and I have no problem admitting that.”

Gold medallist Japan's Yuto Horigome (C), silver medallist Brazil's Kelvin Hoefler (L) and bronze medallist Jagger Eaton of the US pose on the podium at the end of the men's street prelims during the Tokyo 2020 Olympic Games at Ariake Sports Park Skateboarding in Tokyo on July 25, 2021.
Jeff Pachoud–AFP/Getty Images

This is a singular moment in skateboarding, which has surged in popularity during the COVID-19 pandemic. People were desperately searching for new challenges—preferably those that could be done solo, outdoors and socially distanced—to take their mind off the misery. U.S. skateboarding participation spiked 34% during 2020; no other sport saw a higher rise, according to the Sport and Fitness Industry Association.

In Great Britain, website visits to a national skatepark directory were up 214% in April 2021 compared to April 2020. Even many adults, either seeking out an activity to distract themselves during tough times, or looking for something to do with their kids as organized sports shut down (or both) took up skating for the first time. In the U.K., they even have a name: Rad Mums and Dads.

Huston was set to become the sport’s LeBron James or Tiger Woods. The world, however, can now look to Horigome for inspiration. America can claim him somewhat: he is based in Los Angeles, where he moved to be in the hotbed of competitive skating.

He grew in the same Tokyo ward where the Olympic skateboarding venue is located, going to skate parks around the city with his father. In his elementary-school yearbook, Horigome wrote that his dream was “to become the best skateboarder in the world.”

By winning skateboarding’s first gold, maybe he can finally lay waste to the notion that skateboarders are nuisances: a stereotype that persists in Japan (and elsewhere). No skateboarding signs are still common across Tokyo. Now, a skateboarder is one of the faces of Japan’s Olympics team.

“I’m so stoked for him and Japan,” says Eaton, the American bronze medalist. “Yuto is one of the most progressive skateboarders in the world. He does tricks that nobody does out there. And he’s constantly progressing the sport in the right direction. And I have a profound respect for that.”

After Horigome clinched the gold, photographers from around the world—and particularly the host country—mobbed him, social distancing be damned. They trailed him out of the venue, on the way to collect his gold, as if he were a pop star. With his floppy reddish hair, he has the look.

Horigome waved to the delighted Japanese volunteers present in the venue. After he got his gold medal, they gathered together to snap cell phones pictures as he addressed the Japanese press. The scene was the closest thing we might see to a mass celebration at these Olympics. If there was a full house in normal times, fans might have poured out of the seats, just to be close to Yuto Horigome, a young hometown hero. And an Olympic champion.

— With reporting by Aria Chen/Tokyo 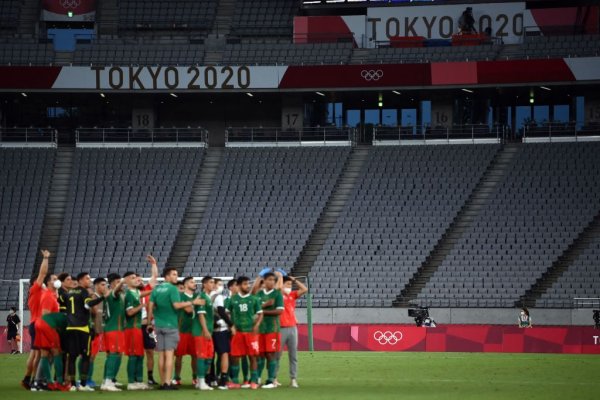