Three years ago the United Nations climate science body issued a landmark report warning that the planet was on track to blow past efforts to limit global warming to 1.5°C above preindustrial levels, a threshold that it warned would bring catastrophic and irreversible effects of climate change. But in that same report, the Intergovernmental Panel on Climate Change (IPCC) emphasized that many paths remained open for us to limit that damage—so long as we acted immediately.

On Monday, the IPCC published a new document with a far less optimistic frame. In it, the group says that the pathway to limit warming to the 1.5°C mark has narrowed and lays out only one plausible scenario to meet that goal—one that would require an extraordinary level of action, and even then, would offer no guarantee.

“It is still possible to forestall many of the most dire impacts,” says Ko Barrett, a vice chair of the IPCC, and deputy assistant administrator for research at the U.S. National Oceanic and Atmospheric Administration. “But it really requires unprecedented transformational change, [and] rapid and immediate reduction of greenhouse-gas emissions.”

Documents like this can be disheartening—in fact, they probably should be. The report, the first in a string the IPCC plans to release in the coming months as part of its sixth Assessment Report, covers the latest science on physical impacts of climate change and runs through a long list of areas where science has definitively established that humans are wreaking havoc on the planet, from the way water circulates across the planet to thawing permafrost.

But the report also offers a reminder that, in the words of Hoesung Lee, chair of the IPCC and professor in the economics of climate change, energy and sustainable development at Korea University, “every bit of warming matters.” No matter how bad things are, policymakers, businesses and individuals can avoid making the situation worse with urgent action.

If you’ve followed climate news recently, the substance of the new IPCC report probably won’t come as much of a surprise. For years, alarming headlines have created a sort of drip of bad climate news, and in recent weeks, droughts, storms and fires have coalesced into one of the most cataclysmic seasons of climate-related extreme weather events in memory.

Even a few years ago, scientists were not entirely comfortable drawing the connection between such events and climate change. But that’s been changing, and the IPCC’s endorsement of those connections gives the concept a gravity that only such a global body can provide. The document is the result of a collaboration between 234 different authors, and draws from more than 14,000 different studies and references. In the end, delegations representing nearly 200 countries agreed to the language—even those whose economies depend on fossil fuels. Ultimately, all of those signed on to the conclusion that human-caused climate change is an “unequivocal” reality.

The list of changes that comprise that broader reality is long. To name a few examples: The report found that human-induced warming has already locked in up to a foot of sea-level rise by 2050 (in terms of the global average). It also shows that every region on Earth is already experiencing some sort of weather and climate extreme—some are suffering more severe heat waves, while others are figuring out to endure unfamiliar storms and precipitation levels.

All of these problems are bound to get worse. With unchecked greenhouse gas emissions, sea levels could rise six feet by 2100, according to the report. The frequency of high-powered hurricanes would spike. And regions across the globe would see hotter and rainier days, and more of them.

The report breaks down five scenarios designed to illustrate plausible pathways by which temperature rise and carbon dioxide emissions may unfold. In all scenarios, from the the most high-emissions scenario presented in which humans do little to slow emissions to the most aggressive scenario in which humans act urgently, temperatures are likely to rise 1.5°C within the next two decades. This is the result of a simple fact: the warming we’re experiencing now is the result of emissions that happened decades ago and we’ve already locked in decades more.

But from there the situations diverge significantly. If humans act urgently, temperatures will peak and then decline, helping stabilize the planet and life on it. If we allow emissions to continue unchecked, temperatures are likely to rise more than 4.4°C by the end of the century—a level that would make life unlivable on vast areas of the planet.

In one sense, this is bad news. Barring a dramatic change in direction that would entail dramatic changes in policy, the planet is likely to pass the so-called red line that scientists and activists have drawn in the sand. But this dynamic—where humans emit and the planet responds—should also offer some motivation as negotiators representing virtually every country prepare for COP26, the U.N. climate conference in November. Ahead of that conference, each country is expected to come up with its own plan to tackle emissions that align with the 1.5°C goal, and commit to those policies on the global stage. On July 31, the U.N. body that organizes international climate talks said that just over half of countries had submitted new plans to reduce emissions and warned that those policies would still push the world past 2°C of arming—and that’s a best cast scenario that assumes countries follow through.

IPCC scientists say they expect negotiators to keep the latest report in mind. We may be close to passing the red line, but we can control how much worse things get afterwards. “We can’t undo the mistakes of the past,” says Inger Andersen, the head of the United Nations Environment Programme. “But this generation of political and business leaders, this generation, conscious citizens can make things right.” 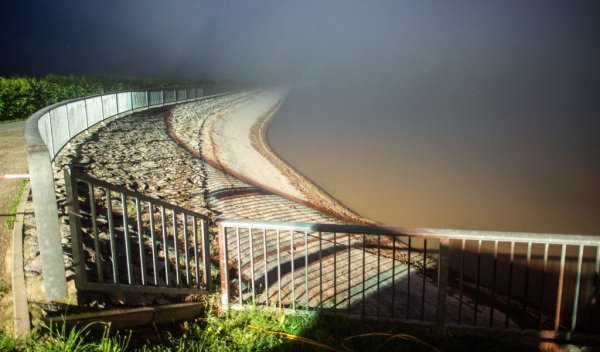 The One Silver Lining in the Bleak IPCC Report
Next Up: Editor's Pick