A New Documentary Tells the Harrowing History of Conversion Therapy

It is believed that more than 700,00 people have been through religious-affiliated conversion therapy programs—which assert that an LGBTQ person’s sexuality or gender identity can be changed—since the movement to promote conversion therapy took hold in the cultural mainstream in the 1960s and 70s in the United States. And that number falls far short of the movement’s true impact, argues Kristine Stolakis, the director of Pray Away, a new documentary on the practice that premiered on Netflix on Aug. 3.

“The ripples of trauma that come from conversion therapy affect people’s partners, people’s kids, families, local communities,” she tells TIME. “I hope that what our film does is put this issue on a map in a way that [helps] the next 10 films get made.”

Although it is now recognized as dangerous pseudoscience by the medical establishment, and banned in 20 U.S. states, conversion therapy remains endemic in many conservative, religious communities—and as Pray Away documents, is grounding a new generation of believers in its rhetoric as part of larger culture wars being waged over gay and trans rights. But many of the movement’s early leaders and figureheads have since recanted; in many cases coming out (or back out) as gay and speaking out about the harm they experienced—and that they caused.

Pray Away deftly weaves their voices with those of conversion therapy participants and survivors, who are seen bearing their scars (literally, as seen in one moving scene from the documentary) and unpacking the struggles that come with realizing their faith may have been misplaced. Here, Stolakis discusses the making of Pray Away and why the current state of the conversion therapy movement is still a cause for alarm.

How would you describe your personal relationship with religion and faith? And did that influence the documentary at all?

This was also a product of [his] having grown up in a homophobic and transphobic environment, both in terms of the world he was raised in, but also specifically the religious worldview. Like myself, he was raised Catholic. And just like much of mainline Christianity, Catholicism remains a homophobic and transphobic environment for many people. Religion is an incredibly powerful force. It is often the language through which we talk about our morals, our core beliefs—our relationship with something greater. That belief system can get tied up with a very problematic message: that to be LGBTQ is, in a sense, a sickness. If you are getting a message that not only is a core part of you psychologically sick, but also a reason that God hates you … the way in which that gets into the cracks and crevices of your soul is devastating.

[Much of] what I found about the movement really surprised me—the vast majority of conversion therapy organizations are actually run by LGBTQ individuals themselves. They believed they had changed. And that really helped me understand a belief that my uncle held his entire life, which was that change is right around the corner. And he blamed himself when he of course, could not change. That became the subject of the film.

Many of the subjects in Pray Away discuss their experience in the ex-gay movement, at least in retrospect, as not changing their sexuality as much as encouraging them to suppress it. But as they all argued, that usually doesn’t work. How do you think the ex-gay movement continues its practice given that track record?

You know, as I was making this film, a lot of people asked me why those people ever believed that they’d changed. One thing I’ve learned from spending time in this world is, let’s say, [when you’re part of] a faith community that’s homophobic or transphobic and you find a Bible study group or a conversion therapy support group happening at your church—that may actually be the first time you feel any comfort, sharing any part of your identity. That moment can feel like your first sense of belonging or community. I think people often mistake that feeling as the beginning of change, and that often drives people to hurt themselves, and hurt others in their own communities.

When you believe you’re doing the right thing, and you’re doing it also in the name of religion, it can put you into a deep place of denial. This is the fuel of what continues conversion therapy and the movement more generally into the present day, despite the undeniable evidence that it doesn’t work—and that it causes trauma.

Read more: Most Christian Colleges Will Never Be a Safe Space For LGBTQ Students. But They Must Still Do Better To Affirm and Support Us

Why do you think these individuals struggle to find—or flat-out refute—that sense of authenticity and belonging among the actual LGBTQ community, or an affirming space?

That’s an interesting question. When you’re in the world that you believe is where you belong, you’re getting told the only way to continue to exist is to change this essential part of yourself. If you’re taught your whole life that you can belong—but only at that cost—I think [that price] for many people at first might feel okay. It might feel like, I found the way to be a part of my family, I found a way to be part of my church, to be part of my neighborhood. And this movement also sends people a message that there’s no world to belong to outside of it. The underlying message is that the only way to be healthy is to be straight and cis. That’s just not true.

As well as telling the stories of a number of the ex-gay movement’s former leaders, Pray Away features the activist Jeffrey McCall, who sees himself as both an ex-gay and ex-trans individual. Do you see many parallels between the ex-gay and the detransition movements, as well as the wider moral panic over trans people?

The anti-trans sentiment that we’re seeing build in our world is definitely a continuation of the ex-gay movement and the conversion therapy movement. It’s essentially the same thing, even, which is to say and [to preach] that to be trans is a sickness and a sin, and it is something that you need to fix. The other thing I’d say about detransitioners specifically—and you could describe Jeffrey in those terms—is that they are an example of hurt people hurting people. People who have grown up in transphobic environments and transphobic families can internalize those message, and [they] become a weapon to then hurt other trans people. That is the same power structure that our film talks about.

And I’m not saying that to absolve leaders. We really highlight in the film that no matter the intention, this internalized hatred wielded outwards has undeniably caused harm. But if we don’t understand that piece of the puzzle in terms of how this world works, I don’t think we’re going to have the tools to meaningfully stop it.

Do you think that viewers—in particular, queer and trans viewers—should find these former leaders of the movement sympathetic? Were you conscious of, in a sense, trying to humanize them?

In terms of my own reactions, what I will say again is that I came at this film from a very personal perspective. My uncle went through hell; I was very prepared to make a film about straight, homophobic people making LGBTQ people hate themselves—but that’s not what I found. The experience was, of course, a roller coaster; I had my own moments of anger, of sadness, of confusion. But I hold no expectations of how any individual will respond—no expectations of forgiveness or understanding or even compassion.

Our core creative team [working on the documentary] was comprised of people with a direct relationship to these issues: gay and trans conversion therapy survivors, queer people who grew up evangelical. And we felt all the feelings throughout the making of this film, but made group decisions to try to capture the truths and the nuances of this world. What we decided in the filmmaking process is that we wanted to tell the story in a way where people could have their own reactions—if they wanted to feel angry, if they wanted to feel sad, if they wanted to feel anything.

Do you see the ex-gay movement as ever “dying out,” as Yvette Cantu Schneider, previously an ex-gay leader and policy analyst with the anti-gay Family Research Council, puts it at one point? What would it take for that to happen?

The reason the conversion therapy movement continues is that it is based on a larger culture of homophobia and transphobia. That remains incredibly persistent in mainstream religions and in many conservative communities around our world. The fact is that many churches might stay they’re against conversion therapy, but if a trans kid or a gay kid comes to their pastor, the silence can be deafening. Then maybe that family finds an ex-LGBTQ program; it’s still a message that their kid needs help. For me, it was that larger power analysis that we tried to bring into the filmmaking—that is what’s essentially training new leaders to be motivated to believe that change is possible. And I hope that that makes for richer conversations moving forward about what I know to be true, which is that this movement is dangerous. 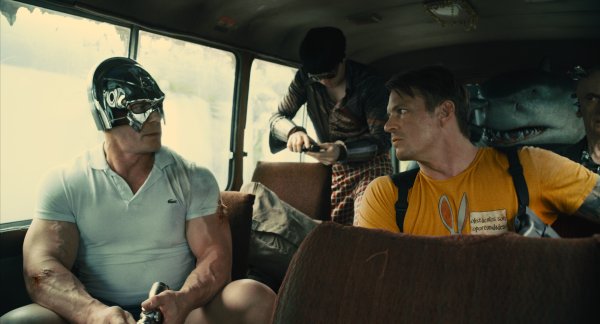 Here Are All the Upcoming DCEU Movies and TV Shows After The Suicide Squad
Next Up: Editor's Pick