The most offensive thing about Republicans with ties to President Donald Trump’s re-election efforts openly working to put rapper Kanye West on swing states’ ballots isn’t that they’re trying to pull votes away from Joe Biden. It’s that they’re doing so with very little effort to hide their true intention: to chip away at Biden’s support among Black voters.

Reports are coming in fast and shameless about GOP efforts in places like Ohio, Wisconsin and Colorado to get West’s name on the ballot in what can only be seen as an exploitative campaign to suppress the votes of those who may see the 43-year-old celebrity’s name and think, ‘Why not?’ It’s a cousin to Trump’s roll-the-dice pitch four years ago, when his main offering to Black voters was, “What do you have to lose?”

The GOP effort isn’t even trying conceal its desired effect. Biden won the nomination with tremendous help from Black voters who have known him for decades, but will also be counting on support from younger voters who may now see West’s name on the ballot and flip. Trump himself retweeted an article saying a West candidacy is designed “to siphon [B]lack votes away from Biden” and added that “Corrupt Joe has done nothing good for Black people!” And West is saying he doesn’t care if he costs Biden the White House and seems fine with that if it helps his pal Trump. “I’m not denying it; I just told you,” he told Fortune.

The Trump campaign professes no knowledge of West’s efforts or who is behind them.

“No, I have nothing to do with him getting on the ballot. We’ll have to see what happens,” Trump said at the White House on Wednesday, saying he liked the artists “very much.”

One thing that’s certain is that West’s candidacy is that of spoiler and not of real contender: there is no mathematical path for him to earn the 270 Electoral College votes required to win. But if West can scatter the vote in a three-way race in enough precincts, it could deny Biden his return to the West Wing. Clinton lost Pennsylvania, for instance, by just five votes per precinct in 2016. When asked about his non-path to a win, West told Fortune: “I’m not here to argue with you. Jesus is king.”

The perplexing sound bites and appearances from the talented musician who, according to his family, lives with bipolar disorder, has made the entertainment desks in global newsrooms churn, of course. But the more sobering reality is that the future of the country may hinge on West. Sure, Biden is leading in the polls, but those polls only measure a head-to-head race with Trump — not a three-way contest. Biden is also behind where Clinton was with Black voters four years ago, according to Harry Enten’s analysis at CNN.

Americans still in the grip of a pandemic are not paying close attention to the election, which is largely playing out on social platforms like Twitter, where only 1 in 5 adults are active, according to Pew research. In-person campaigns are largely on pause. The Biden campaign has ceded door-to-door efforts and instead booked more than a quarter-million-dollars in ads for the final push. Trump is banking on his hardcore supporters staying with him until the end. In a distracted nation, West could find a very narrow lane to swing this election.

Take Michigan, where 15% of the electorate was Black, according to exit polls four years ago. Imprecise extrapolation puts that at roughly 724,000 of the 4.8 million votes cast statewide. Hillary Clinton claimed 92% of them and still came up 10,704 votes short. If she had swung the Black vote by just one percentage point, Michigan and its 16 electoral votes would have gone her way.

To be fair, the Black vote on its own isn’t why Clinton came up short. In Wisconsin, Trump won by 22,748 votes four years ago. The state’s electorate was 7% Black then, or roughly 208,000 Black votes. Clinton won 92% of them. That again puts Clinton within striking distance only had she carried 95% of them — a figure she didn’t reach anywhere.

Still, margins matter in politics, and third-party races have a whole host of complicating factors when the contenders are legitimately trying to make a point or even dream of winning. They seldom “cost” the two-party system’s nominees a win but can complicate things. For instance, Al Gore lost Florida — and thus the White House — in 2000 because roughly 300,000 Democrats voted for George W. Bush in a state that was decided by 537 votes. Third-party contender Ralph Nader’s 97,488 votes weren’t the sole reason he lost, but they sure didn’t help Gore either.

If you don’t think West could have a similar effect, ask yourself this: Are you sure you don’t have five neighbors in your precinct who could throw West their vote for a giggle? 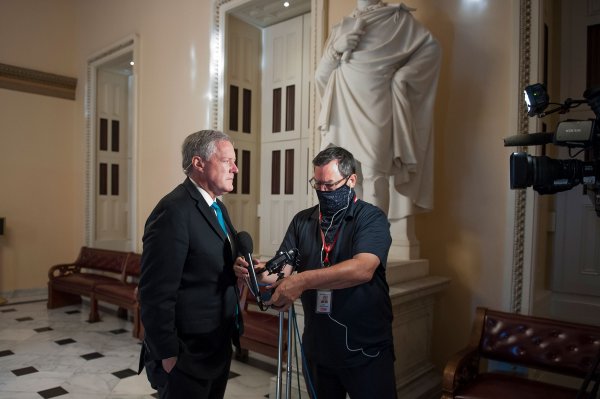 Washington Grinds To a Halt on Pandemic Relief
Next Up: Editor's Pick