Japanese Skaters Are Now 3-for-3 in the Olympics, Proving Japan Is the Top Skateboarding Nation in the World—and It's Not Even Close

Japan’s Sakura Yosozumi claimed the gold medal and Kokona Hiraki won the silver in the first women’s Olympic park skateboarding event Wednesday—and settled for good the question of which country is the best at skateboarding in 2021.

Sky Brown, the 13-year-old phenom who skates for the U.K. but was born in Japan, won bronze.

Of the nine medals in skateboarding awarded at the Tokyo Summer Olympics so far, five have gone to Japan—including all three golds.

Just a little over a week ago, Japan claimed the first two gold medals in the inaugural skateboarding events at the Olympics. Tokyo native Yuto Horigome, 22, took gold on July 25 in the men’s street skateboarding event. In the women’s event on July 26, Momiji Nishiya, became Japan’s youngest Olympic champion at the age of 13. Her teammate Funa Nakayama earned bronze.

The U.S. has claimed just one medal: Jagger Eaton earned the bronze in men’s street skating.

Yosozumi, 19, went into the Olympics ranked world No. 2. She’s been steadily racking up wins on the world stage, taking first place at the Dew Tour Park Final in Iowa in May. During her first run in the final, she performed two back-to-back 540s (that’s one full rotation, plus a half, in the air) and landed solid slides and grinds in the bowl without crashing, earning her a score of 60.09. She could not improve on that performance in two subsequent runs, but neither could any of her competitors.

Yosozumi’s given name “Sakura” means cherry blossom in Japanese, and the skater dyed a strip of her hair pink for her Olympic debut. She even made sure that the color would get washed out a bit by Wednesday to show the best shade. “The results have bloomed,” Yosozumi said, referencing her victory and her name.

Hiraki is just 12 years old and one of the youngest Olympic medalists ever. Had she won gold, she would’ve become the youngest-ever Olympic champion. But Hiraki doesn’t think that matters. “I don’t really care about age,” Hiraki, her nails painted in bright yellow, told reporters.

The final took place around noon in Tokyo’s punishing heat, with the temperature hitting 93 degrees. An ambulance was parked right outside the skateboarding venue and Poppy Olsen of Australia wore an ice vest in between runs. But the finalists, who know and skate with each other as friends, were keeping their spirits high, cheering and applauding during the athlete introduction prior to the skate-off.

The camaraderie was perhaps the most endearing when the skaters formed a circle to hug and comfort Misugu Okamoto from Japan after she fell in her final run. Ranked No. 1 in the world, the 15-year-old came first during the qualifying rounds. During her last run, she landed high difficulty tricks including a 540, but fell when she attempted a kickflip indy, costing her a medal. Olsen and Team USA’s Bryce Wettstein could be seen carrying Okamoto on their shoulders following the group hug.

The medal haul of young Japanese skaters stands in stark contrast to Japan’s mostly negative attitude towards skateboarders: no-skateboarding signs are common on the street—including one spotted just outside Ariake Urban Sports Park, the Olympic skating venue in Tokyo. Skateboarders can get hassled by police officers or security guards for just carrying their skateboards around. 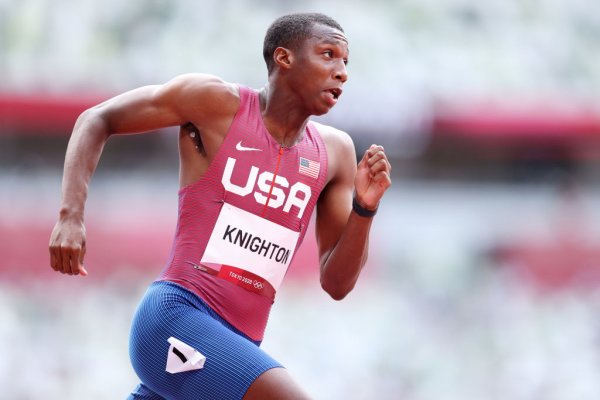