Despite IOC Restrictions, Team USA Athletes Are Protesting at the Tokyo Olympics

By Josiah Bates and Melissa Locker

The International Olympic Committee (IOC) is investigating an act of protest undertaken by a Team USA athlete during a medal ceremony at the Tokyo Games on Saturday—and more demonstrations possible in the coming days.

Raven Saunders, 25, a U.S. shot-putter who won silver in Tokyo, raised her hands and crossed them in an X while posing for a photo on the medal podium. Moments later, U.S. fencer Race Imboden won bronze in the foil event (which took place in a separate venue). While accepting his medal, Imboden appeared to flash a circled X on his hand.

Saunders told the New York Times that a handful of Team USA athletes formed a plan over the past few weeks to use the X symbol as their way of protesting. Saunders named Imboden—who has not commented publicly on his protest—as one of those athletes but did not identify any others.

U.S. hammer thrower Gwen Berry raised a fist to protest racial and social injustice before she competed on Tuesday. She had indicated before the Games that she would protest in Tokyo. “Protest on a podium … it is a human right,” Berry said in a TIME100 Talks interview. “It is not for the IOC to decide.”

What does the “X” represent?

Saunders explained that the X was meant to represent “the intersection of where all people who are oppressed meet.” She made the gesture after China’s anthem—honoring the gold medal-winner Gong Lijiao in the shot-put event—had finished playing, adding that she did not want to be disrespectful to a national anthem.

Saunders—who is Black and openly gay—said that her win was for more than just herself: “For me, just being who I always aspired to be, to be able to be me and not apologize for it [and] show the younger generation that no matter what they tell you, no matter how many boxes they try to fit you in, you can be you,” Saunders said after her event.

What are the IOC and USOPC rules on protest?

Until very recently, Rule 50 of the IOC’s Olympic Charter barred athletes from participating in “[any] kind of demonstration or political, religious or racial propaganda.” While just last year the IOC re-affirmed that it would not allow athlete protests in a bid for political neutrality, on July 2, in the run-up to the Tokyo Games, the IOC announced changes to Rule 50 that allowed some forms of demonstrations, an attempt to respond to the reality of athlete protests.

Under the new rule, athletes are now able to engage in a non-disruptive demonstration to “express their views” while on the field of play before their events begin, though athletes aren’t allowed to protest during competition or while on the podium. (Members of Team USA’s women’s soccer team, as well as members of other countries’ teams, took a knee before matches in the soccer tournament played out.)

If an athlete flouts the rule, potential violations are evaluated by the athlete’s national Olympic committee, the international federation for the sport involved, and the IOC. The United States Olympic and Paralympic Committee (USOPC) announced on Dec. 10, 2020, however, that it will not respond to such behavior at this year’s Games—as long as an athlete’s actions are not deemed hateful.

The IOC is facing pressure to do the same. On the day of the Olympic opening ceremony, more than 150 athletes, academics and social justice advocates signed an open letter demanding changes to Rule 50 and urging the IOC to “refrain from imposing sanctions on athletes protesting and demonstrating.”

In Tokyo, as required under the rule, the USOPC evaluated Saunders’ action and came to their own determination. In a statement sent to Reuters, the USOPC said they had conducted their own review and ruled Saunders did not break any rules, saying “Raven Saunders’ peaceful expression in support of racial and social justice… was respectful of her competitors and did not violate our rules related to demonstration.”

What is the history of protests at the Olympics?

While the IOC advocates for political neutrality, the Olympics have been a stage for political protests nearly since they began in 1894. One of the earliest examples came in 1906, from Irish track and field athlete Peter O’Connor. A decade before the Irish War of Independence, O’Connor was angered by having to run under the British flag, so he scaled a 20-foot flag pole and waved the Irish flag.

Most famously, in 1968, American sprinters Tommie Smith and John Carlos famously raised their fists in a Black Power salute when the American national anthem played at the 1968 Mexico City Games. The photo of their gloved fists in the air has become an iconic image of protest. It was a bold act that ultimately cost the athletes their careers, although they did not regret their actions. “I’m proud of what we did,” Carlos told the New York Times in 2016.

It wasn’t until 1975 that the Olympic charter banned protests. At that time, it was actually part of Rule 55 in the charter and it stated: “Every kind of demonstration or propaganda, whether political, religious or racial, in the Olympic areas is forbidden.”

Just a few weeks after the IOC tweaked its rules to allow for some forms of protest. It is facing its first test with Saunders. In a press conference, IOC spokesman Mark Adams said they are “looking into the matter” and considering their next steps.” For her part, Saunders is taking it in good humor, tweeting, “Let them try and take this medal. I’m running across the border even though I can’t swim.” She included the cry-laughing emoji and pinned it to the top of her feed. 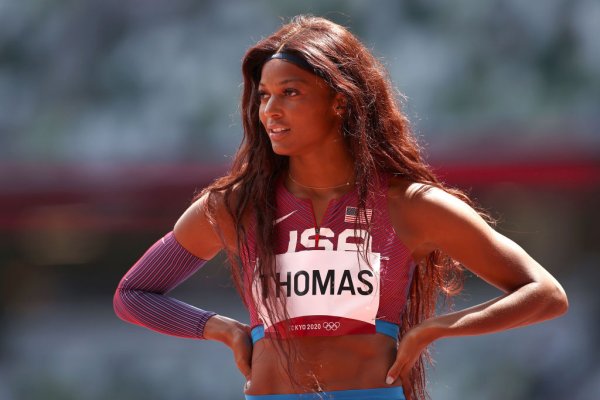