What does Lamont Marcell Jacobs, the new 100-m Olympic champion and world’s fastest man, want Americans—the majority of which surely never heard of him before he won that title Sunday night in Tokyo— to know about him? “Hey, here I am,” he says, while waving. “I am here.”

He sure is, Jacobs won the Olympic 100-m sprint on Sunday evening in Tokyo in 9.80 seconds, earning him the coveted title of “world’s fastest man.” Jacobs is the first Italian man in history to win the 100 m. Fred Kerley of Team USA won the silver medal, in a time of 9.84 seconds. Andrew De Grasse of Canada took bronze in 9.89.

American Trayvon Bromell, a gold medal favorite who had run the fastest time in the world this year, 9.77 seconds, coming into the race, did not qualify for the finals. Nigeria’s Enoch Adegoke edged him by a thousandth of a second in the semis.

The Italian athletic officials and journalists in the crowd jumped with joy after Jacobs crossed the finish first, holding off Kerley with some comfort. Many of them, including Jacobs, put their hands on their heads. “Totally unexpected,” said Gianluca Cordella, a writer for Il Messaggero, an Italian outlet. Jacobs himself agreed with that assessment. “No,” he said, when asked if he figured he could win. “It’s incredible. My dream is to arrive here, and run a final. And we run a final and we win a final. It’s amazing. I have no words to describe this moment. I think I need four or five years [to] realize and understand what’s happening.”

Even many of his competitors aren’t familiar with him. “I don’t know anything,” said De Grasse, the bronze medalist. “I thought my main competition was going to be the Americans. I thought the Americans were going to bring it.” They didn’t, except for Kerley. The other U.S. finalist, Ronnie Baker, finished fifth.

Jacobs was born in El Paso, Tex, but said he moved to Italy with his mother when he was six months old; his parents separated. His mother is Italian, and father is American. Jacobs said he started speaking to his father, for the first time, only a year ago.

He has a Usain Bolt-sized hole to fill as a potential new “face” of track and field, a sport that thrives on individual charisma and star power. This is the first time since 2004, when American Justin Gatlin earned gold in Greece, that a sprinter with no single name—Bolt—has won the 100 m.

Perhaps Lamont Marcell Jacobs—will acquire that one-name label common to the world’s most popular athletes (LeBron, Serena, Bolt, etc). It won’t be easy; Bolt cast a long shadow over the sport, winning eight gold medals during his remarkable run at the three Olympics before Tokyo; in Beijing, he set a new world record in the 100 m, 9.69 seconds. He then broke it at the World Championships a year later.

He set the bar impossible high. Jacobs, 26, gets his chance to go after it.

Fairly or not, suspicions of cheating will continue to pervade the sport. For example the defending 100-m World Champion, Christian Coleman of the U.S., is not in Tokyo: he was handed a two-year ban in October of 2020.

And it was a bittersweet 100 m. Long one of the marquee events of the entire Games, the race thrives off of sprinters playing to the crowd before the start. No one did that better than Bolt, via his iconic lighting pose. The event also usually features a sudden hush of a full stadium, before the gun goes off, that builds anticipation.

That kind of atmosphere’s been long gone from these Games. But without the roars, Jacobs still crossed the finished line first. He’s the new world’s fastest man. You’ve heard of him now. 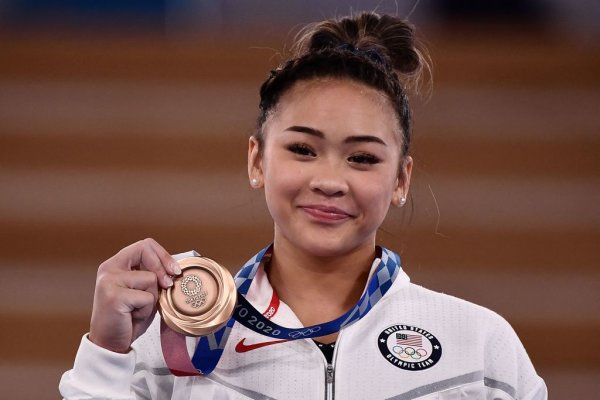