Lilly King of the United States celebrates as Yulia Efimova of Russia looks on during the Rio 2016 Olympic Games, on Aug. 8, 2016.
Clive Rose—Getty Images
By Sean Gregory / Rio de Janeiro

In addition to shattering world records and breaking down barriers, the swimmers at the Rio Olympics have managed another feat of sorts: reigniting international sport’s Cold War. On the self-proclaimed forces of good: swimmers from Western nations who broke unwritten Olympic etiquette by speaking out against competitors they deemed “drug cheats.” The villains were swimmers from Russia and China who had been reinstated after serving suspensions for performance-enhancing drugs.

The flames had been fanned before the Games, when an investigation found in July that Russia engaged in a wide-ranging state-sponsored conspiracy to deceive anti-doping officials during the Sochi Olympics. Many athletes and anti-doping officials called for all Russian athletes to be banned from Rio as punishment. Instead, the International Olympic Committee left it up to each global sports federation to make its own call. In all, 278 of the 389 Russian athletes set to compete in Rio were cleared.

Read More: The Must-Watch Track and Field Events in Rio

One of them was Russian swimmer Yulia Efimova, who had served a 16-month ban for doping. After Efimova competed in the 100-m breaststroke semifinals, she waved a “No. 1” finger in the air––mimicking American Lilly King, who did it after an earlier swim in the event. King was not pleased. “You wave your finger No. 1, and you’ve been caught drug cheating?” King said on NBC after her semifinal. “I’m not a fan.” King then won gold over Efimova the next night, and barely concealed her disgust afterwards. “It just proves that you can compete clean and still come out on top with all the work you put in,” King said.

Her stand followed that of Australian swimmer Mack Horton, who beat China’s Sun Yang to win gold in the 400-m freestyle on Aug. 6 and called Sun, who served a three-month ban for testing positive for a banned stimulant in 2014, a “drug cheat.” After the race, Horton said his win was one “for the good guys.”

Their strong words were supported by other swimmers, including Michael Phelps, and applauded by many fans and commentators. But it’s about to become far more difficult for the U.S. to cling to its perch atop the moral high ground. American swimmers and gymnasts have rarely been caught up in cheating scandals, and the current teams in these sports, according the drug testers, are squeaky clean. The same, however, can’t be said for the U.S. in track and field, which is soon to take center stage in Rio.

The recent past isn’t filled with “good guys,” as it were: the early 2000s ensnared many of America’s biggest names in the sport, including Marion Jones, a star at the 2000 Olympics in Sydney, who admitted to using steroids and was stripped of her medals. Tim Montgomery’s 100-m world record, set in 2002, was stripped. And the current team in Rio includes athletes who’ve been suspended for doping. Justin Gatlin, America’s fastest man at the 2016 Olympics, tested positive for performance-enhancing drug use in 2006, and served a four-year ban. Tyson Gay, a member of the U.S. 4 X 100 relay roster in Rio, tested positive for an anabolic steroid in 2013, costing the entire U.S. 4 X 100 relay team at the London Olympics their silver medals.

Read More: Justin Gatlin Has A Final Chance at Redemption

King herself said Gatlin and Gay shouldn’t be in Rio. “Do I think people who have been caught doping should be on the team?” King said. “They shouldn’t. It is unfortunate we have to see that.”

Russia is far virtuous here, either. Track’s global governing body banned all but one Russian track athlete from Rio after a report commissioned by the World Anti-Doping Agency found rampant performance-enhancing drug use on the team. And on Saturday that lone holdout, long jumper Darya Klishina, was also suspended.

Even Gatlin – who denies that he’s ever knowingly taken a banned substance, and insists he’s currently clean – realizes he can’t criticize the Russians like the swimmers have. “I guess I don’t have much of a soap box to stand on when it comes to situations like this,” he said during a June interview with TIME, after being asked about the blanket ban on Russia’s Olympic track team.

Americans may stack up medals on the track in Rio, but they’ll have to table their righteousness on that podium. 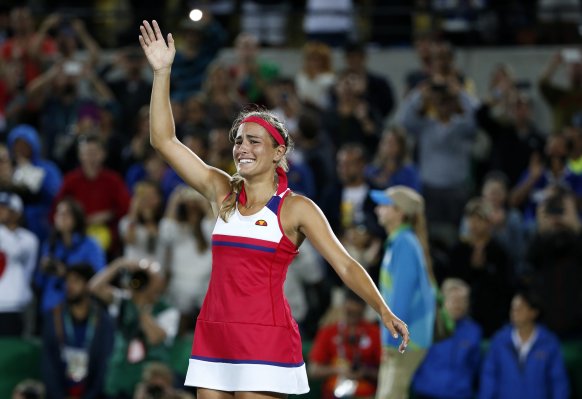