CHOFU, JAPAN - JULY 29: Ilona Maher of Team United States looks out as she prepares to lead her team out onto the field for the Women’s pool C match between Team United States and Team Japan during the Rugby Sevens on day six of the Tokyo 2020 Olympic Games at Tokyo Stadium on July 29, 2021 in Chofu, Tokyo, Japan. (Photo by )
Dan Mullan—Getty Images
By Melissa Locker

When Ilona Maher isn’t dominating on the rugby field while representing Team USA at the Tokyo Olympics, she’s going viral on TikTok.

The 24-year-old has become a star on the social media platform by giving fans a front-row seat to the fun in Tokyo as the U.S. women’s rugby squad chases its first Olympic medal. (Team USA recently beat Japan and China to advance out of the group stage to the quarterfinals on Friday).

Maher’s videos are a wry, witty, and engaging peek at the action in Tokyo, where spectators have been banned due to the COVID-19 state of emergency there, that have garnered tens of millions of views. Her notable clips include trying to talk to her “kiwi coach” while social distancing, modeling Ralph Lauren’s Olympic uniforms (especially that bucket hat), or trying to work up the courage to go talk to Romanian volleyball players. (“It is not easy to go up to a pack of six, seven Romanian volleyball players and shoot my shot,” she said in one video. “I mean, I’ll work on it. But I don’t know if that’s in the cards for me.”)

Maher’s U.S. rugby teammates make frequent appearances; they racked up over 6.8 million views (so far) when she and some teammates tested the Olympic Village’s infamous cardboard beds. Maher highlights their on-field success in post-game interviews breaking down Jordan Maytas’ tackles and Kristi Kershe’s two tries against China on Thursday. Maher also spotlights her teammates’ skills off the pitch. Joanne “Nana” Fa’avesi, who not only plays hooker and prop on the field, but apparently doubles as the team’s hair stylist. “We would be lost without Nana Faavesi,” Maher wrote over a video of Fa’avesi diligently braiding the hair of multiple teammates.

Maher, a Vermont native, played Rugby in college at Quinnipiac University, has struck a chord with fans who appreciate her honesty and openness. “I started playing rugby my senior year of high school. I don’t love my body all the time but I’ve grown to really appreciate it. I get very mad at myself when I make mistakes,” she shared. “I’m self conscious that my personality may be too much for some people.”

While the Olympian is clearly match fit and ready to rumble on the rugby field, she did admit to spending six hours per day on the app. Maher said that much time online can be a challenge in a video she shared of herself creating TikTok content “so the world can get an inside look” at the Olympic Games. To soundtrack the clip, she chose Reba McEntire’s “I’m a Survivor” to highlight the fact that she is working two jobs at the moment—Olympic athlete and TikTok influencer. 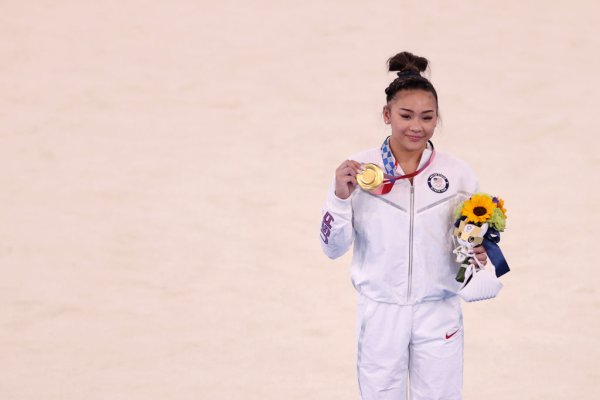 How Suni Lee Won Gold in Tokyo Gymnastics All-Around
Next Up: Editor's Pick