Saweetie is the next celebrity artist to partner with McDonald's for a special meal.
Courtesy McDonald's
By Raisa Bruner

Ten crispy chicken nuggets, medium fries and a Coke: a classic McDonald’s order. But add sides of cajun and sweet chili sauces and a collectible purple box and you’ve just placed an order for the BTS Meal, this summer’s collaboration between the seven-member Korean pop sensation and the fast food giant. It was a small addition, yet on a quarterly earnings call this week, McDonald’s partially credited a 25% sales increase in the U.S. to the collaboration.

Launched in late May and officially concluded on June 20, the BTS Meal followed a history of big-ticket star collaborations between McDonald’s and buzzy parts of pop culture. And on July 29, McDonald’s announced the next celebrity to receive a meal treatment: 28-year-old Californian rapper Saweetie, whose song “Best Friend” with Doja Cat went platinum this year. Her meal: a Big Mac, 4-piece chicken nuggets, fries, Sprite and sides of bbq and “Saweetie-N-Sour” sauce.

In the 90s and 2000s—and continuing to this day—Happy Meals partnered with movie releases, intended to drive audiences to the box office and provide kids with collectible pieces of kitsch. Cartoon characters and superheroes are prevalent. (Most recently, you can find Disney Pixar’s new animated movie Luca featured in a box.) But lately, McDonald’s has turned to real-life stars—specifically, globally hitmaking musicians—to drive sales, with food and collectible merch as the main appeal, instead of free plastic souvenirs. In September 2020, their Travis Scott meal (Quarter Pounder with bacon, fries with BBQ sauce, Sprite) netted the rap star about $20 million, according to a Forbes profile, and some franchises even ran out of ingredients. It was the first McDonald’s meal named after a celebrity since 1992’s Michael Jordan meal. October’s J Balvin meal (Big Mac without pickles, fries and ketchup, Oreo McFlurry) was similarly popular.

Now known as the biggest band in the world, BTS has a powerful fan base that turns performances and video clips viral in a matter of minutes. They have rallied to support philanthropic efforts and to ensure that streaming numbers regularly break records. And their other commercial partnerships—with brands like Hyundai, Samsung and Fila—have proved fruitful, as fans happily shell out for BTS-branded items. (The McDonald’s meal collaboration was followed by two merch collections as well.) According to McDonald’s president and CEO Chris Kempczinski, that was borne out in the BTS Meal reaction. “It has been, to borrow a BTS lyric, Dynamite,” he said during the July 28 earnings call, referring to the group’s 2020 hit song. “We saw significant lifts in McNuggets sales and record breaking levels of social engagement.”

For BTS, the launch coincided with the release of their summer single “Butter,” which was incorporated into a commercial starring the septet. For McDonald’s, it came on the heels of a challenging year for the restaurant business, especially quick-serve establishments. The company’s 2020 earnings took a hit due to pandemic-related downturns, with increased U.S. revenue at the end of 2020 not quite offsetting the slowdown in global sales, missing Wall Street projections by 2%. This summer’s BTS meal helped them get back on track, plus some: sales for existing U.S. locations beat analysts’ projections for the past quarter, showing numbers up nearly 15% compared to the same period in 2019.

“We saw our customers framing and even selling their receipts from the Travis Scott and J Balvin meals,” says Jennifer Healan, Vice President of U.S. Marketing, Brand Content and Engagement for McDonald’s, “so we wanted to build on that fan passion for memorabilia.” And, given BTS’s well-known dominance on social media, she says McDonald’s took inspiration from K-pop marketing tactics, sharing a release schedule, concept photos and teasers in advance so fans could plan their purchases, just like with an album release cycle. The result: they broke their own records of social engagement across channels, trending number two on Twitter globally and number one in the U.S. Their TV commercial also trended on YouTube and remains easily their most-liked piece of content there, with over 4 million views. Ultimately, that translated into sales. Sales jumped 25.9% in the U.S. for the quarter, attributed in part to the BTS Meal (and a revamped chicken sandwich offering). Internationally, the meals proved particularly popular: in Indonesia, franchises had to shut down due to too much demand to cope with COVID precautions. In Malaysia, the Philippines and Vietnam, Kempczinski said on the earnings call that “the BTS ARMY went out of their way to prepare snacks for our crew and managers to support them on launch day.”

Tapping into pop star power is not new for McDonald’s. In the 2000s, celebrities like Britney Spears and *NSYNC featured heavily in marketing, with CDs available in-store. Those partnerships never included specific meal, however, and they faded out of fashion over the past few decades. But celebrity collaboration has made its comeback this year—not only for McDonald’s, but also for fellow fast food brands: there was “The Charli” coffee order at Dunkin’ Donuts, the “Shawn Mendes Bowl” with cauliflower rice at Chipotle, Miley Cyrus’s “Guac is extra but so is Miley burrito” also at Chipotle, and a special menu at Wendy’s with custom orders matched to (and promoted by) a selection of Twitch’s top gaming streamers. Oreo also struck gold with their cult-status Chromatica cookies, designed after Lady Gaga’s last album.

That these brands are opting for high-wattage endorsements and partnerships to add shine to their offerings should come as little surprise: not only are the 2020s shaping up to be an era of extreme nostalgia for the glossy pop heyday of the 90s and 2000s, but also savvy consumers—particularly younger customers—want and expect more from the products they shell out for. French fries served up in a novel purple box may be just the extra push someone needs to make a purchase, especially if there’s a connection to a beloved star. And a name like Saweetie, who is currently a rising star with songs that are known for viral popularity on apps like TikTok, could add a tastemaking edge to the seminal brand. “A critical goal of ours with these collaborations is to create a cultural moment for the brand that resonates with a new generation. And we want to make sure we’re staying relevant with our younger customers and crew members,” Healan says. Fast food in the U.S. is a $279 billion market; growth is projected for 2021 as the economy, and life, comes back online. McDonald’s is taking a gamble on Saweetie, who does not have the same level of name recognition and superstardom as J Balvin, Travis Scott or BTS. But she does have over 12 million Instagram followers. And when a burger is only $2, any boost—from BTS, Saweetie or otherwise—can make a big difference. 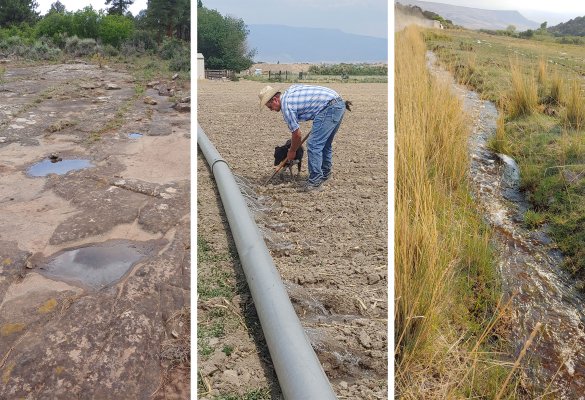 For Small Ranches, This Year's Drought Could Be the Last Straw
Next Up: Editor's Pick