Call it swimming’s nirvana, its Valhalla or even an aquatic Elysian fields. However you describe Friday night’s penultimate day of Olympic swimming in Rio, it wouldn’t do it justice.

Maya DiRado of the U.S. kicked things off by snatching gold from Hungary’s Katinka Hosszu, the heavy favorite and fastest qualifier in the event, to win her second gold in her first Olympics, while Michael Phelps ended his individual Olympics career with a three-way tie for silver, and Katie Ledecky set yet another world record to defend her 800m title. U.S. sprinters Anthony Ervin and Nathan Adrian put a capstone on the night by winning gold and bronze, respectively, in the 50m freestyle —a remarkable 16-year-gap for Ervin between his last gold in the same event in 2004.

Twelve minutes into the night’s event, Michael Phelps climbed onto the blocks, bent over, and adjusted his feet on the starting platform. He stretched his arms out behind him, then relinquished them to the force of gravity to swing around and smack his back. Slap, slap, slap, three times. It’s a ritual that began when he first started swimming, and stuck with him to the end. The arena fell silent before the starting gun sent them off on two lengths of the pool in what swimmers consider the most punishing stroke.

(Read More: Why Olympic Swimmers Win the Most Medals)

From above, Phelps’ butterfly is more like a wave than a stroke. Flowing from his outstretched arms to his arched back and his final undulating kick, it’s one continuous movement. Phelps was sixth at the turn, at 50m, and started closing the gap with Singapore’s Joseph Schooling, who surprised many when he qualified ahead of Phelps with a stunning 50.83, the fastest time this recorded this year. Schooling bested that time with a 50.39, and Phelps fell behind to touch simultaneously with South Africa’s Chad le Clos, the silver medalist from 2012, and Hungary’s Laszlo Cseh, who owned the fastest time this year before the qualifying heats in Rio. The three longtime rivals wound up splitting silver behind Schooling, 21. While he may not be a household name — yet — this isn’t the first time the Singapore-born, Florida-raised, University of Texas swimmer raided the podium. At last year’s world championships, Schooling finished third, behind le Clos and Cseh (Phelps was serving a USA Swimming suspension for a DUI and did not compete).

With the victory, Schooling won Singapore’s first Olympic gold and became just the third person to beat Phelps in an individual Olympic race. “It’s all kind of a blank really,” Schooling said after beating his idol, whom he met in 2008. “I need time for all of this to sink in. Just being beside [Phelps], walking alongside him and celebrating — I’ll cherish that for the rest of my life.”

Just eight minutes after Schooling’s upset, Katie Ledecky earned her fifth medal in Rio when she defended her Olympic title in the 800m freestyle. Ledecky made a statement with each lap, pulling first half-a-body-length then a full body and finally, by the last lap, several lengths ahead. She wasn’t racing the field but the clock, spending most of the race more than a second-and-a-half under her own world record pace, set earlier this year. With two laps to go, she was nearly two seconds under that pace and in the final 50m, crushed it with a final time of 8:04.79–still nearly two seconds ahead of her own world record. The win gave Ledecky her fourth gold of these Olympics to go along with one silver.

On the medals stand after, the typically contained Ledecky betrayed rare emotion. It came out again later when talking about leaving her longtime coach, Bruce Gemmell, when she starts to swim for Stanford University in the fall. “He’s a great friend, and he will always be a big part of my life,” she said before breaking down. “It’s been a great four years.”

For all of its importance, Ledecky’s win was the least climactic of her five races so far. This is the event she won in a stunning upset over more seasoned distance swimmers in 2012, and it’s the distance at which she’s most comfortable. But as she proved at last year’s world championships when she became the first swimmer to win all four freestyle distances—200m, 400m, 800m and 1500m—distance isn’t her only specialty. (The Olympics includes a 1,500m for men only.)

“It’s just unbelievable that someone can swim the sprint and distance races and be dominant all the way through,” says Dara Torres, a 12-time Olympic swimming medalist. Ledecky’s ability to excel at both the 200m and the 800m is akin to having Usain Bolt win both the 100m and the 5,000m. “She’s so versatile; I’ve never seen that before or heard that before,” she says.

Ledecky is only the second woman to dominate all freestyle distances at a single Games, following American Debbie Meyer in 1968. But Meyer didn’t swim the two relays that year.

Ervin’s feat was far more surprising. Diagnosed with Tourettes as a teen, he began smoking and experimenting with drugs and alcohol after his Olympic win, falling into depression and becoming self-destructive––a period he chronicles in his recently published memoir Chasing Water. Returning to swimming was the culmination of a larger turnaround. Making the finals in Rio, he said, was accomplishment enough, while winning gold was a gift. “It’s completely unexpected for me to be up here at all,” he said.

Phelps’ second place finish was uncharacteristic, and equally unexpected. It’s only the third silver in Phelps’ career, which came a day after he became the first person to four-peat and win the same event in four consecutive Olympic when he out-touched a field that included teammate Ryan Lochte, in the 200m individual medley.

All week in Rio, Phelps has been talking about his last races as a competitive swimmer, and getting a little nostalgic about hanging up his goggles and cap. “Things started hitting me this morning,” Phelps said on Thursday after winning his 26th medal and 22nd gold in the 200m individual medley. “I only have to put on my racing suit two more times after tonight.”

That kind of history is hard to make and will be even harder to surpass. Phelps leaves swimming on his terms. He admits that in 2012, he wasn’t in the sport for the right reasons, being pulled back in to train by a sense of obligation and resignation after establishing himself as the most decorated Olympian ever. With his four golds in Rio––so far––Phelps’ legacy not just as a swimming great but as an Olympic legend is secure.

Before it’s finished, however, Phelps will take one last dive into the pool, for the medley relay on Saturday. And he insists it will be his final Olympic race. 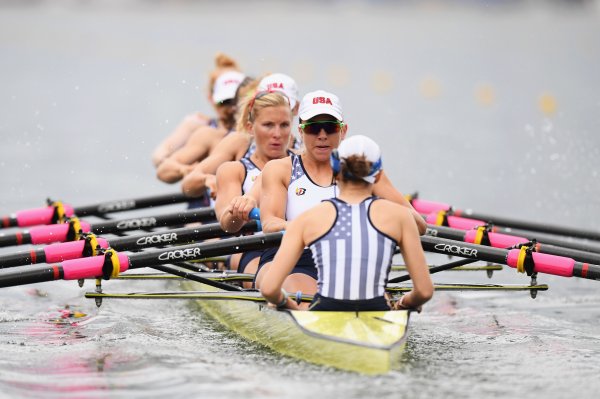 Meet the Most Dominant Olympic Team You've Never Heard Of
Next Up: Editor's Pick