As Democrats and Republicans in Congress squabbled over blowing past the deadline on an infrastructure agreement, the business and labor communities were getting tired of the partisan fighting.

Their leaders, who span both sides of the aisle and who had poured tens of millions of dollars into lobbying on this issue, just wanted a resolution, convinced that an investment of over $500 billion in new spending to improve the country’s broadband, transit systems and drinking water will be crucial to rebuilding a post-pandemic economy.

“Our messages have not wavered in the sense [of] ‘keep fighting through, keep working through the differences. And we believe the the benefits of getting the bipartisan package outweigh some of the short term pain,’ says Ed Mortimer, Vice President of Transportation Infrastructure with the U.S. Chamber of Commerce, the largest business lobbying group that represents over 3 million organizations.

On July 28, the group of 22 Senators who had been hammering away for weeks on a bipartisan agreement finally announced it had become a reality, and the Senate approved a crucial procedural vote later that evening. The business and labor communities had joined together to fuel the push to get the deal across the finish line. Business groups like the Chamber of Commerce and Business Roundtable, which represents 230 CEOs of the country’s largest companies, including Amazon’s Andy Jassy and Goldman Sachs’ David Solomon, joined with labor groups like the AFL-CIO, the country’s largest federation of unions.

On most issues, these factions are usually at odds with each other. But on infrastructure, they managed to find common ground, united by their belief that the investments in an infrastructure package would strengthen economy. In early July, they had officially launched a coalition to make sure their priorities wouldn’t remain a pipe dream. “We’ve been generally united across business and labor on infrastructure for a long time, but what we didn’t have was a really clear piece of legislation that encapsulated that full vision that we could all get behind,” says Matt Sonnesyn, Vice President of Infrastructure policy at Business Roundtable.

This unlikely coalition illuminates how outside groups maintained strong incentives to reach a bipartisan infrastructure deal, even as it threatened to crumble inside the halls of Congress. And when the deal looked to be on shaky ground, those powerful groups—which spend millions of dollars in both lobbying and campaign donations—put pressure on the White House and lawmakers on both sides of the aisle to make sure the agreement wouldn’t fall apart. “When that coalition coalesced, I think it demonstrated to the parties who were engaged that there was real strong organized support out there for doing the right thing, and that they should keep at it,” says Sonnesyn.

The Chamber of Commerce has spent approximately $28 million lobbying both Congress and the Biden Administration in 2021 so far, according to federal disclosure reports, and the bipartisan infrastructure bill is among its top priorities. During the 2020 election cycle, its political action committee donated $5,000 to Louisiana Senator Bill Cassidy and Maine Senator Susan Collins, two of the key Republican Senators involved in negotiations. Throughout the negotiations, says Mortimer, the Chamber’s lobbyists have been in frequent contact—sometimes up to five times per day—with Senators in the working group tasked with coming to an agreement, and with Democratic and Republican leadership. Business Roundtable has also made infrastructure a top priority and spent over $8 million on overall lobbying this year. Officials with the group have been in contact with lawmakers over 300 times since April, according to Business Roundtable, and have frequently spoken with senior Biden Administration officials like Cedric Richmond, who heads the White House Office of Public Engagement, and Brian Deese, the Director of the National Economic Council.

Top labor groups like the AFL-CIO and the Laborers’ International Union of North America (LIUNA) spent less overall on total lobbying—under $1 million—but they still hold major clout within the Democratic Party. And they were just as persistent as the business groups in pushing for a package. When President Biden hosted eight leaders of the business and labor communities at the White House on July 22, he commended them for sharing his belief that “it’s both in the interest of business and labor to get this done.” “It’s not about energy versus environment, it’s not about business versus labor,” he said. It’s all about, basically, a race to the future.”

The AFL-CIO and LIUNA did not respond to requests for comment.

On July 26, 140 leaders of some of the country’s most prominent and lucrative organizations, like Nasdaq, United Airlines, and the Boston Consulting Group, sent a public letter to Senate Majority Leader Chuck Schumer, Senate Minority Leader Mitch McConnell, House Speaker Nancy Pelosi and House Minority Leader Kevin McCarthy urging them to “seize the moment” and pass the infrastructure package imminently. The letter noted that the package “reflects priorities shared by labor, business and state and local governments, as well as the American people.” Signatories ranged from Stephen Schwarzman, the CEO of the private equity fund Blackstone Group and a prominent ally and donor of former President Donald Trump, to major Democratic donors including investment banker Blair Effron and Jonathan Tisch, CEO of Loews Hotels.

Even with the Senate moving forward on the bill, the battle isn’t over. While Democrats and Republicans have broadly agreed to a framework, multiple points of disagreement could still emerge as the Senate debates the package and, if it passes, sends it to the House of Representatives before it lands on Biden’s desk. Already, Pelosi has said she will not take up the bill until the Senate passes an accompanying $3.5 trillion budget resolution that would fund many of the party’s priorities on issues like childcare and education. But Democratic Arizona Senator Kyrsten Sinema has said that price tag is too high, a disagreement that could further complicate the process.

In the meantime, the business and labor coalition intends to keep up the pressure.

“Is it a frustrating process? Sure. But you know what, let’s get it right. Let’s do it in a way that gets that bipartisan support,” says Mortimer of the U.S. Chamber of Commerce. “And we believe that, to have the most durable, long-lasting legislation, getting bipartisan support is critical.”’

The original version of this story misstated the current CEO of Loews Hotels. It is Jonathan Tisch, not Robert Tisch. 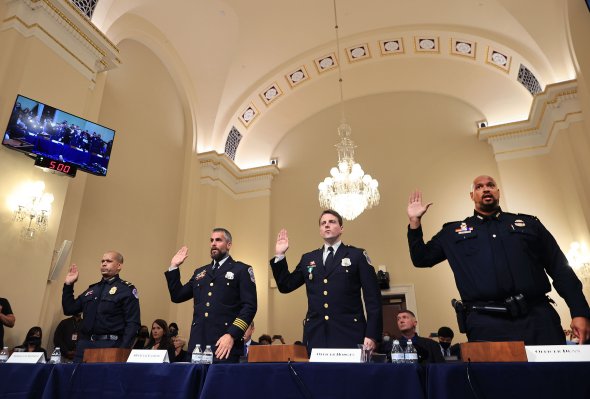