Why Are the Olympics Shrinking Basketball? Here's What to Know About 3x3

It’s a game played by the likes of little kids and middle-aged, out-of-shape wannabe Kevin Durants, in backyards and driveways and weathered gym floors across the world. You’ve got six weekend warriors at the park, looking to get in some exercise? Play a little 3×3 basketball. If you’ve got seven … some poor soul sits and has “next.”

In Tokyo, this shrunk-down, half-court version of basketball will make its Olympic debut. On the surface, that counts as an improbable development; regular 5-on-5 basketball is pretty darn popular in its own right. Why is the makeshift version of the game worthy of a gold medal?

But in the U.S., outfits like Hoop It Up have organized 3×3 tournaments since the 1990s, and FIBA, basketball’s governing body, set rules for 3×3 in 2007. It made its major international debut at the Asian Games in Macau later that year. And Olympic organizers have long been in the market to add events that can draw a younger, attention-challenged audience; 3×3 fits the bill. A sped-up version of a globally beloved game should prove more attractive to this set than, say, modern pentathlon.

So how does it work? Games are 10 minutes long, and are played on essentially a half-court. There’s a 12-second shot clock. Whoever leads after the 10 minutes—or scores 21 points first—wins. Three-point shots are worth two points, layups and other traditional two-pointers are worth a single point. Just like how you score it in the park.

A team that grabs a defensive rebound must dribble or pass back past the three-point line—er, two-point line—before attacking on offense. Though the court is shorter than in 5-on-5, players say cardio is even more important in the 3×3 game. “It’s kind of like pandemonium, like you’re shot out of a cannon or something,” says Kelsey Plum, a member of Team USA’s Olympic 3×3 team who plays for the WNBA’s Las Vegas Aces. “It’s 20 seconds of hard sprint, then like and a couple seconds rest and you never really get to catch your breath.”

“It’s a continuous game,” says Allisha Gray of the Dallas Wings, one of Plum’s teammates in Tokyo. “It’s not like how you do it in the backyard, where you score, and you check it up. It’s not a stop and go pace.”

3×3 is also much more physical; the refs, the players say, let a lot more grappling go. Once a team commits seven fouls, the other squad shoots two free throws. But no one individual can foul out of a game. “You can pretty much be a hack,” says Plum, with some enthusiasm.

In 3×3, you also can’t depend as much on shot blockers to bail you out if an opponent blows by you. It’s basic math: with two less defenders, you simply have less help. “If you can’t hold your own,” says Plum, “you’re going to get exposed.”

The U.S. men didn’t qualify for the Olympics. 3×3 has become a specialized game, so it’s simply not a matter of throwing three NBA stars together to win a medal. The Team USA women’s squad consists of Plum, Gray, the Chicago Sky’s Stephanie Dolson, and Jackie Young of the Aces, a late replacement for Katie Lou Samuelson of the Seattle Storm, who tested positive for COVID-19. “One of the biggest misconceptions of this whole thing is, Oh, they just decided to pick four of us from the national team pool, and now we’re playing 3×3,” says Plum. “In actuality, we’ve been training for years. We had try out for this, and play in Olympic qualifying tournaments. This has been years in the making. This wasn’t a spur-of-the-moment thing”

The U.S. women play their first game the afternoon after the Opening Ceremony, on Saturday in Tokyo, against Mongolia. (The popularity of 3×3 has indeed spread far and wide around the world.) They’re a medal favorite; the Associated Press is predicting Poland, Serbia and Latvia to medal on the men’s side.

At these Olympics, 3×3 could really take off; 10-minute games and 12-second shot clocks seem to fit a bite-sized, TikTok age. “It’s not a big time commitment. It’s not something where it’s like, I need to sit down for two hours to watch this. Which is cool, because, it give fans the opportunity to be like, O.K., what’s this about?” says Plum. “If I’m only going to watch something for a couple of minutes, I want to be super entertained by it. I promise you that it will be entertaining. There will be a lot going on. It’ll be super physical. People will be taking each other out and stuff.”

Kind of like how you took out that annoying co-worker at that lunch-time 3-on-3 game at the Y. Except this version features some of the worlds most skilled basketball players. In Tokyo. At the Olympics. It’s quite a new age half-court hoops. 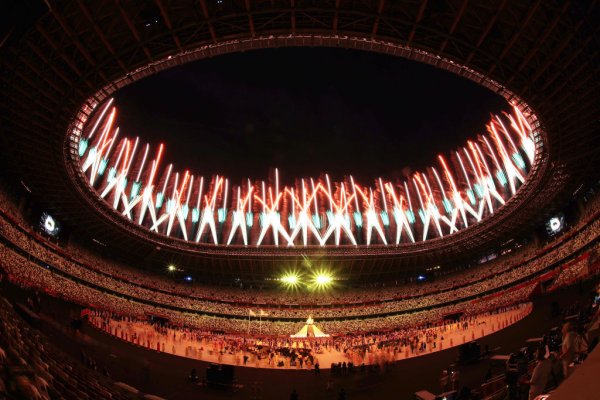 What You Didn’t See on TV at the Tokyo Olympics Opening Ceremony
Next Up: Editor's Pick