Team USA’s Katie Ledecky lost her first individual event at the Tokyo Summer Olympics Monday morning. Ariarne Titmus of Australia inched past Ledecky in the last 50 m of the 400-m freestyle—just as she did the last time the two met.

Titmus, who’s earned the nickname “Terminator” for her methodical conquering of rivals in the event, clocked the second fastest time in history to beat Ledecky to the wall. The 20-year-old used the same strategy against Ledecky that helped her push past the American at the world championships in 2019 and become the first to best Ledecky in the event at a major meet.

Ahead until the last 100 m, Ledecky gave up her half body length lead as Titmus found her now-trademark spurt of speed to touch the wall first, at 3:56.69, 0.67 seconds ahead of Ledecky.

“I was excited that to win this event, I had to beat a great champion, and that makes it even more satisfying,” Titmus said afterward. “Coming into the race my mind was very clear. I wasn’t thinking about split [times] or that kind of thing, I just swam intuition — the training that I’ve done, my body just knew what to do.”

In the stands, pacing nervously apart from the Australian contingent of swimmers watching the race, Titmus’ coach Dean Boxall’s exuberant celebration went viral as he fist-pumped and jumped up and down in reaction to her win.

Ledecky holds the last three world records in the event, but with this win, Titmus is quickly establishing herself as the new queen of the 400-m freestyle. After finishing fourth at the 2017 world championships, Titmus has been methodically whittling away at her time. Like Ledecky, she’s also aiming to swim in the 200-m and 800-m events in Tokyo, so the two are likely to meet again, fueling a newfound rivalry that is likely to give both swimmers a boost in those races.

“I think we’ve both helped each other,” Ledecky said. “It’s just great for this event, and all the freestyle events, to have had some really great competitors in the field. Each race is a tough race and that’s something that motivates you in training.”

Ledecky addressed the pressure of expectation after she swept the freestyle events at the last Olympics in 2016. “People doubt me, people doubt anyone that has a fantastic swim or has swims like I did in Rio. I had to overcome a little bit of that self-doubt. Really, between Trials and today I did everything I could to eliminated all of that from my head and really believe in myself.”

The only spectators at the Tokyo Aquatics Center to witness the stunning upset were other swimmers, grouped by country, with some sitting socially distanced and others not. Teammates waved flags and sounded horns to make as much supportive noise as possible, but the races themselves were remarkably quiet, with the only sound coming from the splash of the swimmers racing through the pool.

Ledecky gave Titmus a quick hug once both were out of the pool, and was likely already looking ahead to their next meeting, less than 7 hours later, for the qualifying heats for the 200-m freestyle. If both make the final, then Ledecky and Titmus will race again in two days.

Ledecky, however, has an additional challenge that day—she’s also hoping to swim the final for the 1500-m freestyle as well, which occurs in the same session, meaning she may swim both finals within an hour and a half of each other. 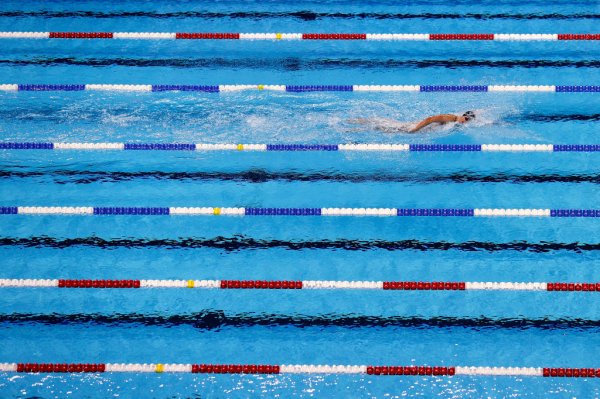 How Katie Ledecky Swims So Fast
Next Up: Editor's Pick