Can Employer Mandates Get More Americans Vaccinated? New York and California Are Finding Out

What to do about the U.S. vaccine uptake rate? Even with what appears to be a slight increase as people try to protect themselves against the more transmissible Delta variant now spreading through many parts of the country, only a pitiful 0.1% or so of Americans are currently getting their first dose every day. That’s a far cry from the urgent scramble that Delta demands, especially given that only about half the country is fully vaccinated—and some places, like Louisiana (36.6%) and Arkansas (36%), are lagging woefully behind.

So far, the U.S. vaccination drive has largely relied on carrots—the idea has been to sell people on the notion that, when you’re vaccinated, you can more safely see loved ones, go out to eat, and so on. But it’s become clear that about half of Americans don’t feel they need to be vaccinated to enjoy those things. When the nationwide COVID-19 case numbers were ultra-low earlier this summer, that might have been a relatively low-risk choice, since when there’s little virus circulating in a given area, unvaccinated people can essentially operate like free riders, benefitting from the community protection conferred by those who got their shots. But now, as the Delta variant fuels what could become a fourth wave, that free-riding behavior becomes a lot more dangerous, to the vaccinated and unvaccinated alike.

It’s time, then, to switch to the sticks—namely, vaccine mandates. Mandates are working wonders in France, where vaccination appointments skyrocketed after President Emmanuel Macron announced earlier this month that only vaccinated people (or those with proof of a recent negative test) would be allowed to visit restaurants, cafes and more. At least some of those recently getting their shots probably did so only begrudgingly, and France has been rocked by protests since the mandate was announced—but all that really matters is that the country’s uptake rate is increasing at a critical moment.

It’s hard to imagine a nationwide vaccine mandate flying in the States, where we’ve never even come to a national consensus on things as simple as wearing a mask. But private and public employers largely can require workers to be vaccinated to come back into the office—and some already are. Just today, New York City Mayor Bill de Blasio announced that all city workers must either get their shots by mid-September, or be tested for the virus weekly. That news comes a few days after Hizzoner urged private employers in the city to mandate the shots as well, framing them up as a pathway to freedom rather than an intrusive government requirement.

“If people want freedom, if people want jobs, if people want to live again, we have got to get more people vaccinated and obviously, it’s time for whatever mandates we can achieve,” de Blasio told WNYC’s Brian Lehrer last Friday. (California announced similar rules for state employees and some health care workers today, while the U.S. Department of Veterans Affairs will likewise require many of its doctors, nurses and more to be inoculated.)

Employer-enforced vaccine mandates will no doubt prove controversial, but they are generally legal—last month, a federal judge threw out a workers’ lawsuit over a Houston hospital’s mandate, finding that such a requirement is allowed under Texas law. If employer vaccine mandates become the norm, there will no doubt be some who protest—but if such requirements can do anything to boost our tepid uptake rates and create safer workplaces, they will be worthwhile. 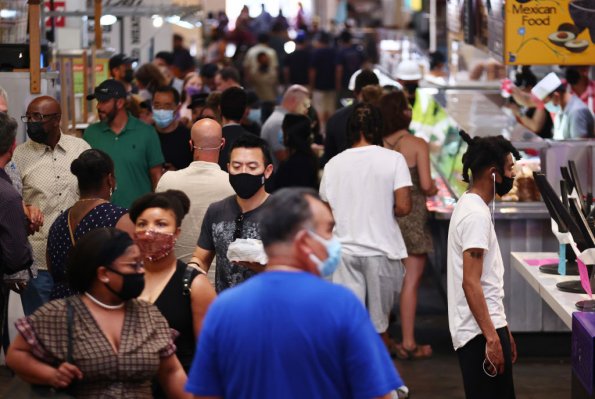 The 6 Key Factors That Will Determine the Severity of the COVID-19 Surge in the U.S. This Fall
Next Up: Editor's Pick