John Kerry on Border Carbon Tax: The U.S. Doesn't Want to Push Others Away

When the European Union laid out the details of a measure to tax carbon at its borders earlier this month, all eyes turned across the Atlantic to see how the U.S. would respond. Would the Biden Administration, as it forges ahead with its own ambitious plans to reduce emissions in the U.S., take action to make sure foreign imports face the same climate costs as products made domestically? American officials, so far, have sought to thread a needle on the sticky question, suggesting a carbon tax on imports to the U.S. as a distant possibility without seeming too enthusiastic about it.

In a July 22 interview, U.S. Special Presidential Envoy for Climate John Kerry offered a key reason why the Administration has been slow to fully embrace the tactic: doing so might harm the ongoing multilateral efforts that the U.S. is engaged in to encourage other countries to strengthen their climate policies. Since taking up the job as Biden’s climate envoy, Kerry has traveled the world with the stated mission of encouraging countries to commit to more ambitious climate mitigation measures.

“It’s premature to be discussing whether or not you ought to unilaterally go off and do a CBAM,” Kerry told TIME on the sidelines of the G20 climate and energy ministers meeting in Naples, Italy, using an acronym for a carbon border adjustment mechanism. “Right now, we’re pursuing multilateral efforts… We’re trying to bring people together; we don’t want to do something that pushes people away.”

Still, Kerry noted that President Joe Biden has asked him “to fully evaluate all the consequences” of the European border carbon adjustment and added that “by evaluating the European one, we’re going to have a sense of what we might or might not embrace, if we ultimately felt that’s the right thing to do.”

The rationale for border carbon adjustments is fairly straightforward. Climate regulations impose a cost on domestic industry, and those costs put local companies at a competitive disadvantage when compared to corporations located in countries that have not adopted an aggressive approach to climate change. A measure that places a fee on imports from places that aren’t tackling climate change helps level the playing field for industry. From a climate perspective, it also nudges countries to introduce more aggressive climate policies and creates a potential ripple effect whereby countries commit to more ambitious climate policy to advance their trade and economic agendas.

In recent months, there’s been a rapid increase in interest in such border carbon mechanisms across the globe. Earlier this month, the European Commission, the European Union’s executive body, announced details of its own plan to roll out a border carbon adjustment over the next few years. And talk has grown on Capitol Hill over the possibility of the U.S. imposing its own, garnering bipartisan interest not just because it would encourage other countries to reduce their emissions but also because it would likely hit China at a time when Democrats and Republicans alike have positioned the country as a geopolitical adversary.

But it would also inevitably make it harder for Kerry and others in the Administration to collaborate with China ahead of this fall’s UN climate conference in Glasgow. Countries have committed to ratcheting up their climate plans ahead of the meeting, and organizers hope that the collective result will help put the world on track to keep temperatures from rising more than 1.5°C. China is critical to such an outcome, and Kerry has publicly called for Beijing to do more while lobbying Chinese leaders behind the scenes.

Kerry’s remarks to TIME follow a variety of headline-grabbing comments he has offered on the topic in recent months. In March, he told the Financial Times that a carbon border adjustment mechanism would be a “last resort” for the U.S. Later, he told Bloomberg that the Biden Administration is, in fact, considering the policy. 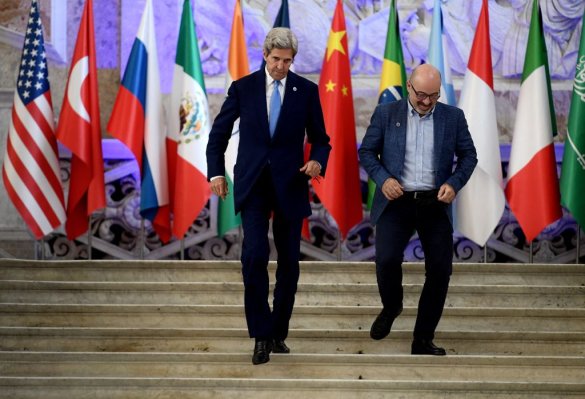 Countries Have 100 Days Before a Landmark Climate Conference. Will They Come Together in Time?
Next Up: Editor's Pick