‘It’s About Creating Equity.’ The Significance of German Gymnasts' Full-Length Unitards at the Tokyo Olympics

The German women’s Olympic gymnastic team’s decision to wear full-length unitards instead of traditional leotards at the Tokyo Olympics—a move team members have said is meant to combat sexualization in the sport—is highlighting the sexism long associated with women’s sports and what they wear.

“We wanted to show that every woman, everybody, should decide what to wear,” said team member Elisabeth Seitz, who also competed in the London and Rio Olympics, when the team first wore full unitards during podium training on Thursday. According to the BBC, the German Gymnastics Federation said in April, when the team debuted full-length bodysuits, that they were taking a stand against “sexualization in gymnastics.” The sport has been rocked by sexual abuse, most notably that from former Team USA doctor Larry Nassar, who was sentenced up to 175 years in prison for abusing gymnasts for decades.

While wearing full-length bodysuits is not against official rules, it is not common practice. The German team will decide whether to wear the unitards later in competition.

Germany's Pauline Schaefer-Betz competes in the artistic gymnastics balance beam event of the women's qualification during the Tokyo 2020 Olympic Games at the Ariake Gymnastics Centre in Tokyo on July 25, 2021.
Lionel Bonaventure—AFP via Getty Images

Voss told the BBC in an April interview—after wearing the full-body suit at the European Championships—that she wants to be a “role model for young gymnasts who don’t feel very safe in every situation.” Deciding whether to wear a normal leotard should be an individual choice, she said.

It’s that individual choice that’s so crucial for making athletes feel comfortable in sports, according to Akilah Carter-Francique, the executive director for the Institute for the Study of Sport, Society and Social Change at San José State University. “It’s not just about the uniform. It’s about creating equity, inclusion and space for these young women—who are growing into womanhood—to find and continue to use sport as a place of empowerment.” says Carter-Francique. “What’s important is that these athletes are allowed to bring their full selves into the space and not have to be concerned about how they look, or whether they are being objectified in these spaces of participation and competition.”

Olympic sports have long been political; Black runners Tommie Smith and John Carlos made history in 1968 when they raised their fists during the National Anthem. But that very intersection coupled with the racial and gender makeup of governing bodies and organizing committees raises questions about discrimination related to gender, race and religion. In the weeks before Tokyo, a number of controversies highlighted how women, BIPOC athletes, competitors with disabilities and other marginalized groups are affected by governing bodies and officials decisions. Earlier this month, Norway’s women’s beach handball team were slapped with a fine over their decision to wear brief shorts instead of bikinis. The International Swimming Federation’s decision not to allow swimming caps made to accommodate Black hair in this year’s Olympics sparked an uproar; officials are now reconsidering their decision. And Paralympian Olivia Breen said an official told her that her uniform was “too revealing” and “inappropriate” at the European Championships.

There have been moments of inclusion though. In 2016, fencer Ibtihaj Muhammad was celebrated as the first Muslim woman to represent the U.S. at the Olympics while wearing a hijab. And almost a decade ago, beach volleyball changed their policy so women now have uniform options besides bikini briefs.

When Carter-Francique thinks about the German gymnast team’s decision, she smiles. As a former collegiate athlete at the University of Houston who participated in track and field, she knows the feeling of discomfort in uniforms that don’t feel practical. “I was a hurdler and long jumper. So those are very dynamic events, much like gymnastics, in the sense that your body is going in a lot of different directions,” she says. “You want something that you look good in but also something that covers you up in areas that you may have body issues, or just your physicality itself, the uniform does not accommodate for.”

The move by German athletes also sends a message particularly to athletes who “may not feel comfortable in their body image or feel that gymnastics was a sport that they could not participate in because of the uniform. It’s going to be able to open up doors to provide access,” she says. “So we need to acknowledge their voices, we need to listen to our athletes.” 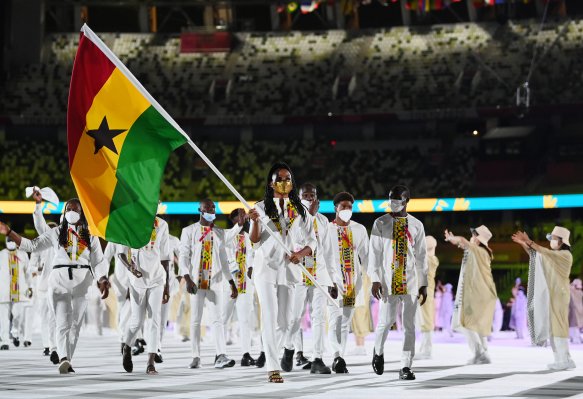 The Tokyo Olympics' Somber Opening Ceremony Was Saved—Barely—by the Athletes
Next Up: Editor's Pick