Summer Camps Across the U.S. Are Dealing With COVID-19 Outbreaks. So What Happens When School Starts?

Clear Creek Community Church took COVID-19 seriously from the beginning. The interdenominational church, which has five locations in and around Texas’ Galveston County, suspended in-person services through most of spring 2020, and required attendees to wear masks until this past May. When the church announced a five-day summer ministry camp for kids in grades 6 to 12 for this June, it also shared a set of protocols the camp would enforce to curb the spread of the virus: More hand-washing stations were to be installed. Spray hand sanitizers would be given to every group. Attendees would be encouraged to keep six feet apart from each other, and mask up when that wouldn’t be possible.

But those steps didn’t stop COVID-19. As of July 21, 157 cases in Galveston County have been tied to an outbreak at the camp, including, as of July 16, about 30 among campers’ family members who were infected after the kids returned home. The majority of these cases are linked to the more transmissible Delta variant, according to Dr. Philip Keiser, the Galveston County local health authority. Similar outbreaks among this summer’s campers have been reported in Missouri, Ohio and New York.

Keiser says that previous outbreaks among kids haven’t seemed to directly fuel surges among other groups, but they can be a sign of what’s happening in the broader community—before summer recess began, he came to view schoolkids as “canaries in the coal mine.” “If I saw schoolkid numbers going up, I knew a few days later that there would be a lot higher rates among the general population,” he says. It’s no coincidence, he adds, that the number of Galveston County’s new daily infections has risen in recent days; as of July 22, Galveston’s 7-day rolling average of daily new cases was 53.6, a 28% increase over two weeks.

These and similar camp-driven outbreaks across the country has some public health experts, including Keiser, worrying that it’s a sign of things to come when the school year starts this fall. The pandemic is picking up steam in the U.S again, fueled by the spread of the Delta variant and the relaxation of masking and social distancing ordinances. Children can transmit the virus to older, more vulnerable people, which may be more dangerous given the spread of Delta. Additionally, while children remain far less likely to get severely ill from COVID-19 or to show symptoms at all, those under 12 are still ineligible for vaccination, leaving them vulnerable—and kids do get sick and sometimes die from the disease, if rarely so. Even kids who are eligible for the shots are mostly unvaccinated; just 35.6% of those 12-15 and 47.1% of those 16-17 across the U.S. have received at least one dose as of July 14, compared to 68.6% of those over 18, according to Centers for Disease Control and Prevention (CDC) data.

Yet for now, schools across the country are largely set to reopen as normal this August and September. In guidance issued July 9, the CDC, citing the imperative for getting kids back in the classroom, said schools should reopen even if they can’t follow all of the agency’s risk-mitigation advice, though it urged unvaccinated students and teachers to mask up. Disruptions to in-person schooling during the pandemic have had dire consequences for many students, and have fueled a drive to get them back in classrooms; studies have documented learning loss, especially among students of color, and a loss of access to social services like hot meals that keep many kids from going hungry.

U.S. Public Health Service Captain Erin Sauber-Schatz, who led the task force that wrote the CDC’s camp and school guidance, says the key to containing the spread of COVID-19 in school settings is layering on different prevention strategies like masking, distancing and testing, actually enforcing them, and not removing every safety strategy at once. “We really are at a point where we’re confident that we know that prevention strategies—when layered and used with fidelity—that they work,” Sauber-Schatz says.

However, many schools may find it difficult or impossible to implement any or all of that advice. Moreover, some states, including Texas, are actively ignoring that advice—last month, Texas governor Greg Abbott barred public schools from requiring students to wear masks. With the more transmissible Delta variant on the rise and leaders like Abbott rejecting CDC guidance, some public health experts believe school-related spikes are inevitable come fall.

“I think we’re gonna see a wave of outbreaks within schools,” says Dr. Michael Chang, an assistant professor of pediatrics at the McGovern Medical School at the University of Texas. “And then we’re going to have to have a discussion about what to do next.”

Although the Galveston County camp outbreak is still under investigation, Keiser says that interviews with people who were present at the camp, as well as material on the camp’s website, revealed that campers were not required to be tested, social distancing was not strictly enforced and few kids wore masks (“Some of the mothers were rather perturbed about that once they found out,” Keiser said). Clear Creek Community Church did not respond to a request for comment. Tejas Camp and Retreat, the organization that runs the camp facility, wrote to TIME, “Like many camps in Texas, we are adhering to the state guidelines and working alongside our church partners to minimize the risk of any illness in the camp environment. Tejas has also been in contact with local officials and the local emergency management office, but no action has been required. Tejas continues to monitor its staff’s health and will continue to employ testing and safety procedures consistent with those set forth by the state and CDC recommendations.”

Another likely problem, says Keiser, was the low vaccination rate among Galveston County children. While more than half of all Galveston County residents over 12 are fully vaccinated, Keiser says that only about a quarter of children 12 to 18 are vaccinated. Although Keiser says it’s unclear how many kids at the camp were vaccinated, the outbreak was probably a result of “a partially vaccinated group of people all getting together and everyone acting … like they were all vaccinated,” he says. ” “And with that, it’s not surprising that we see a lot of spread.”

The Texas camp outbreak could have been much worse. Galveston County Health District has yet to report anyone being hospitalized in connection to the camp outbreak, which may be further evidence that the coronavirus is not as dangerous for the young, and that the vaccine may be protecting some people from severe illness. However, Yvonne Maldonado, a professor of epidemiology, population health and pediatrics at Stanford University, warns that COVID-19 can still have terrible consequences for children, especially as a growing number are infected.

“Right now, COVID is the tenth most common cause of death in children under 18,” Maldonado says. “The reason I bring it up is, people think the number of deaths is small, relative to [adults]. But children generally aren’t supposed to be dying. They’re healthier.”

This means that parents may need to do a different kind of back-to-school preparation this year. Sauber-Schatz says that if COVID-19 is spreading rapidly in a given community, parents there should be more vigilant during the final weeks of summer to prevent their kids from bringing the virus into schools. “They really need to be careful in what they’re doing, where they’re going, in the few weeks before school starts, just to make sure that they’re preventing any COVID-19 cases from coming into the school environment right off the bat,” she says. “We really want children to get back into the classroom.” 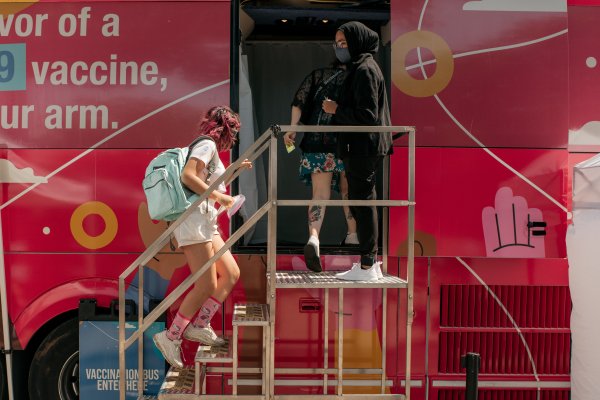 For Kids Who Want Vaccines, VaxTeen Has Answers
Next Up: Editor's Pick