Forget the Bezos and Branson Spaceflights. The Real Deal Happens This Fall

This has been a big month for billionaires in space. On July 11, Richard Branson flew aboard his Virgin Galactic VSS Unity spacecraft 80 km (50 mi) up to suborbital altitude, returned safely to Earth, and earned his astronaut wings in the process. Tuesday morning, Jeff Bezos followed, flying his Blue Origin New Shepard ship even higher—100 km (62 mi) up—and similarly joined the astronaut club.

The media did what the media will always do in situations like this—present company included—which was to find a catchy hook (Billionaire Space Race!) and devote no end of coverage to the Branson-Bezos doings. And with good reason: the technology is nifty, the achievements are real, and both Blue Origin and Virgin Galactic aim to open the flights to the public too—or at least the vanishingly small portion of the public that can afford a six-figure fare for little more than a 10-minute flight to and from space.

But the storm of press has thus far largely overlooked a much bigger space deal coming in September, when yet another billionaire—Jared Isaacman, the CEO of Shift4 Payments, an online payments company—goes aloft with three other civilian astronauts aboard a SpaceX Crew Dragon spacecraft in a mission dubbed Inspiration4. Never mind 10 suborbital minutes, this will be a three-day trip to orbital space at an altitude higher than that of the International Space Station (ISS). And never mind the idea of flying the mission simply to open up the market to more tourists, Inspiration4 is intended to raise funds and awareness for St. Jude Children’s Hospital and Research Center in Memphis, Tenn. Isaacman may not have the celebrity sizzle of a Branson or a Bezos, but both the ambition of his mission and its philanthropic purpose set it apart from Virgin Galactic and Blue Origin’s space-hops.

“I believe that we do have an obligation to leave the world a better place than we found it,” says Isaacman. “Our mission to space had to serve a bigger purpose, which is why St. Jude is such a big part of this. It can’t simply just be about opening the door to space for everyday people. It’s got to be about taking care of some of the problems we’re all faced with now.”

To prepare themselves for the three days they’ll be aloft, the four astronauts of Inspiration4 have been in training since last March, spending weeks at SpaceX headquarters in Hawthorne, Calif., practicing in a simulator, devoting long hours to classwork and longer hours still to studying briefing books while at home.

Joining Isaacman aloft will be Hayley Arceneaux, 30, a physician’s assistant at St. Jude and a survivor of childhood cancer. She will be the first person to travel to space with a prosthetic—an artificial left femur that replaced the bone she lost to her disease at age 10. “I’m going to be the first pediatric cancer patient to go to space,” Arceneaux says, “but I won’t be the last.”

Also flying is Chris Sembroski, 41, a Lockheed Martin engineer in Everett, Wash., and a former member of the U.S. Air Force who served in Iraq and later helped oversee a fleet of Minuteman nuclear missiles. The fourth crew member is Sian Proctor, a professor of geosciences at South Mountain Community College in Phoenix, Ariz., and a two-time NASA astronaut candidate who advanced to the final 47 out of an applicant class of 3,500 in 2009, though she didn’t make the final cut. The difference between the training she would have gotten at NASA and the training she’s getting now is small.

“We’re going through the same things NASA astronauts do,” Proctor says. “When we’re not together, we’re back in our individual bubbles, studying at home.”

The crew is being aided in no small measure by SpaceX itself, which is aggressively backing their efforts. While the project is undeniably a money-making enterprise for the company—Isaacman purchased all four seats for an undisclosed sum, though judging by the prices in the commercial space market, $50 million each is a not unreasonable guess—SpaceX has also flung open its doors to the astronauts, making its training facilities and instructors available to them. What’s more, since the Crew Dragon spacecraft on which the Inspiration4 astronauts will be flying will not dock with the ISS, the docking collar at the nose of the capsule has been removed and replaced by a domed window, or cupola, measuring 117 cm (46 in.) in diameter by 46 cm (18 in.) tall with a total viewing area of 13,000 sq. cm (2,012 sq. in.). It is the largest window ever built for space—dramatically improving the crew’s ability to see the planet below, and to share their view with the people on its surface.

“Clearly, a lot of effort has been put into this by SpaceX,” says Isaacman. “I knew they were an amazing organization, and they have become a huge part of what we are doing.”

Virgin Galactic will likely never catch SpaceX—and doesn’t appear to be trying; its existing space plane is intended only for suborbital flights and it is not openly exploring the possibility of more flight hardware. Blue Origin has more ambitious prospects: it is developing a heavy-lift launch vehicle named New Glenn and is competing to build the lunar landing vehicle that will return American astronauts to the surface of the moon in NASA’s Artemis program. But for now, both companies are more or less eating SpaceX’s dust.

The Bezos and Branson missions themselves may have been thrilling to watch and exciting to root for, but they were far more modest than what Inspiration4 is set to attempt in September. In what is shaping up as America’s summer of space, the best—and certainly the biggest—mission has been saved for last. 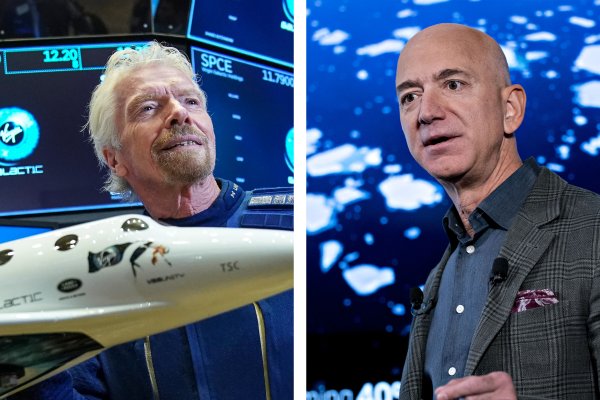