Texas Lawmaker in D.C. on Testing Positive for COVID-19: ‘Let This Be a Reminder'

Texas lawmaker Celia Israel attends a rally outside in Washington, D.C., on July, 15, 2021.
Michael A. McCoy for TIME
By Janell Ross

The legislators, the bulk of the Texas House of Representatives Democratic delegation, had fled their state in hopes of stopping a vote on bills that would change the times and ways that citizens in the state may vote, as well as the experience Texans may have while casting a ballot. The Democrats say the proposed laws would come with the very real possibility of voter suppression and intimidation; one measure in question, for example, would allow untrained and armed poll watchers to stand close enough to voters to see how they vote.

On Saturday, that developing political story ran headlong into the realities of the ongoing pandemic, when three of the Texas Democrats reported testing positive for COVID-19.

Read more: In Texas, Democrats Go All In to Fight Voting Restrictions

All three lawmakers had been vaccinated, according to their caucus, as have most other members of the Texas House of Representatives. Among those who had tested positive Saturday were state Rep. Celia Israel, 57, a Democrat representing a district that includes Austin and nearby suburbs. The district, where people of color make up the majority of residents, reports one of the higher vaccination rates in the state. It’s made up mostly of Travis County, where 61.84% of residents 12 and over have, like their representative, been fully vaccinated. Statewide, about 59% of all Texas residents in that age range have been fully vaccinated.

“Let this be a reminder that COVID-19 is still very much among us, with infection rates on the rise and more infectious variants spreading nationwide,” Israel said in a statement issued Saturday evening. “While I have fully complied with CDC guidelines and am fully vaccinated this will not 100% prevent infection.

“Thankfully I am doing well and hope to get over the infection with mild symptoms. I am currently quarantining until I test negative. I urge anyone not vaccinated to do so as soon as possible to help stop the spread.”

The Texas House Democratic Caucus did not identify the two other members of the delegation who have tested positive for the coronavirus. (I was alerted to Israel’s status because I was in masked but close contact with her while reporting this week.) COVID-19 cases have been on the rise in Texas, as in most states in the U.S., which experts have attributed to factors including the highly contagious Delta variant and the slowing rate of vaccinations. On Thursday, Austin officials tightened the city’s COVID-19 guidelines in response to an alarming spike in cases.

Read more: Texas Was Already One of the Hardest States to Vote in. It May Get Even Harder

Before the news of the positive tests, outlets like Fox News, as well as the lawmakers’ political opponents back home, had highlighted images of legislators aboard a charter flight from Texas to Washington, D.C., in which many appear not to have worn masks. While commercial airlines require all passengers to wear masks during flights, current CDC guidelines do not recommend them for those who have been fully vaccinated. Breakthrough COVID-19 cases are possible even after vaccination—as would be the case with any vaccine—but there is evidence that those cases may be less severe. An AP analysis found that about 99% of COVID-19 hospitalizations in the U.S. in May were among unvaccinated people.

Israel also thanked her Republican and Democratic colleagues for the well wishes and concern some have expressed for her and for her partner, whom Israel had planned to marry Thursday on the floor of the Texas House of Representatives, before the delegation decided to flee the state.

“Most importantly, I hope this instance highlights the sacrifices we’re willing to make for the cause of democracy,” the lawmaker said in her statement. “I would not change anything to protect the right to vote.”

The original version of this story misstated how many Texas lawmakers fled to Washington, D.C. There were 57 in total, not 51. 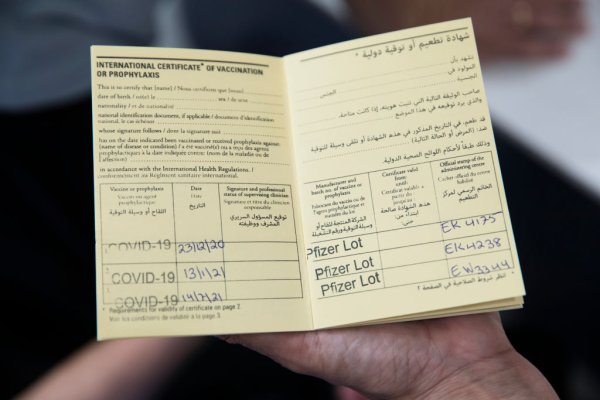 What You Need to Know About COVID-19 Booster Shots
Next Up: Editor's Pick