In Texas, Democrats Go All In to Fight Voting Restrictions

Texas state Rep. Jessica Gonzales speaks during a news conference in Austin, Texas, on early Monday, May 31, 2021, after House Democrats pulled off a dramatic, last-ditch walkout and blocked one of the most restrictive voting bills in the U.S. from passing before a midnight deadline.
Acacia Coronado—AP
By Sanya Mansoor

With the midnight deadline for the Texas legislature to pass any more bills less than two hours away, State Rep. Chris Turner sent his fellow Democrats a text that helped seal the plan to kill a sweeping voting restrictions measure. “Leave the chamber discreetly. Do not go to the gallery. Leave the building,” said Turner, the chair of the House Democratic Caucus. (The text was first obtained by The Texas Tribune.) More than 60 Democrats poured out of the Capitol building on Sunday night and made their way to a predominantly Black church in Austin, where they held a press conference criticizing the bill.

In taking their leave, Democrats ensured there was no longer a quorum for a vote on a bill that would have set new limitations on voting by mail and voting hours, among other restrictions. The measure had the support of Republican Gov. Greg Abbott and the GOP majority of members of both chambers. It’s one of hundreds of bills Republicans in other state legislatures are pursuing to impose fresh voting restrictions after the 2020 elections.

The Texas measure is dead for now, but probably not for long. Abbott has already signaled that he intends to call for a special session to allow lawmakers to approve the legislation. That could be as early as this week or in a few months. Either way, Democrats have vowed to fight on, cementing Texas’ place as one of the few epicenters of the fight over voting rights in the nation.

TIME spoke with Turner about why Democrats staged the walk-out and why he opposes the bill on Tuesday morning. This interview has been edited for length and clarity.

TIME: How are you doing? I’m guessing this wasn’t how you expected the legislative session to end.

Turner: It was definitely an unusual ending. The short answer is tired but gratified for the few dozen members of the House Democratic caucus who made a strong stand.

You sent a text message to fellow Democrats asking them to leave the chamber discreetly. How did you come up with that strategy?

So it was very much a collective idea from the Democratic Caucus. Big picture: we were determined to do all we could to fight this bill. We had a few options. Sunday, when we staged the walkout, was the last day that the Texas legislature can pass bills. We knew we had an opportunity to push this bill back, closer to the midnight deadline, to get it in the danger zone. So we worked to first bring up other non controversial bills or bills that had bipartisan support, partly because we wanted them approved but also to bide more time.

Was it a challenge to get everyone on board?

The majority of our Democratic caucus was definitely on board with leaving the Capitol to ensure the House had no quorum. Had they not been, it would not have worked. Even for the Democrats who did remain in the House, they may not have supported that particular tactic, but they were just as strongly opposed to the bill and were fighting it in different ways.

Some might ask what’s the point of doing this if Republicans are just going to call a special session to pass the legislation? What’s your response?

Well, we can’t control what the Republicans decide to do; we can only control what we do. In Texas, only the governor has the ability to call a special session, for which he also determines the agenda. That’s an immense amount of power. The governor is going to do what he wants to do and then it will be our job to figure out the best way to continue to protect our constituents. If the governor chooses to put a needless voter suppression bill on the agenda for a future special session, then we’re going to fight it just as hard as we fought it this week.

Gov. Abbott has said that he intends to cut funding for the legislative branch, threatening that there would be “no pay for those who abandon their responsibilities.” What’s your reaction to that?

I mean, it’s absurd. First off, the governor doesn’t have the ability to individually cut specific members’ pay. Further, every member of the House and Senate makes $600 a month. We do get a per diem during the session. If you calculated it out—if you took the hour and a half where there was no quorum before the midnight deadline—I think it comes down to about $16 a person. So it’s just a silly diversionary comment. Our constitution sets up three equal branches of government. The executive doesn’t get to defund the people in the legislative branch of government.

What specific provisions of this bill worries you?

This bill was problematic for a number of reasons. First, it empowered partisan poll watchers to potentially harass and intimidate voters and election officials. Texas already has an issue of vigilante poll watchers stirring up trouble. Secondly, the bill would have restricted early voting on Sundays, when many African American churches in Texas and across the country do Souls to the Polls events where the congregation goes to vote after attending church. (The legislation said early voting may not occur before 1 p.m. on Sundays.) Church service is usually in the morning. That’s straight up voter suppression. Thirdly, limitations on being able to send vote by mail applications to voters and people who qualify to vote by mail is simply a needless and a suppressive tactic.

Do you have broader concerns about the bill?

It’s based on Donald Trump’s false narrative that he actually won the last election and that it was stolen from him due to voter fraud, which has been consistently and thoroughly debunked. Republicans in Texas and across the country, in their fealty to Donald Trump, continue to promote and give credence to that Big Lie and say we have to pass these so-called voter fraud bills. And that is just a noxious form of lawmaking that is really insidious, and has no place anywhere in America.

We often see lengthy debates when controversial bills emerge in state legislatures. What was it about this moment that made so many Democrats feel it wasn’t enough to just talk?

The Texas Legislature has a number of hard deadlines on passing bills as they make their way through different chambers. As the minority party in the House, we use every tactic we have. Extending debates to push things past the deadline is something we’re very used to doing and we’re pretty good at it. Earlier this session, we extended debate to kill bills that would have restricted abortion or harmed transgender youth.

In this case, this bill was before us with this hard deadline at midnight on Sunday. And our first line of attack was to extend the debate and push the bill past midnight and kill it the same way. However, we also knew that there was a procedural move the Republicans were going to use to cut off all debate and force an immediate vote on the bill. And as we got closer to midnight, it was increasingly clear that that attempt to cut off debate was imminent. And that’s when the last members who were still there made the decision to leave.

There was a lot of talk related to this bill about singling out Harris County, which in last year’s election allowed 24-hour voting and drive-thru voting. This bill would have banned both. Why does Harris County keep coming up?

First of all, Harris County is home to Houston and it’s the largest county in the state of Texas. Harris County has increasingly become more Democratic over the last several elections and shows that Texas is increasingly becoming a competitive state. In last year’s election, the Harris County election officials were innovative in expanding voting access. So yes, they did allow for overnight voting because you know what, when people that work the night shift get off work at 4 a.m. and want to come vote before going home to sleep, they should be able to do so.

Drive thru was partly a convenience thing, but also a response to the fact that we had a pandemic taking place during the last election. Republicans don’t like that, because they don’t want voting to be more accessible to all voters. They want to make it harder to vote. And so that’s why they very intentionally targeted those innovations in Harris County.

What is the message you want to send not just to Texans, but to Americans in general, by doing this?

I hope that all Texans and all Americans understand that the unified Democratic opposition to voter suppression measures is driven by our belief in democracy—that a democracy is healthiest and strongest when it is open and accessible to all eligible voters in our nation, and attempts to make it harder to vote for eligible voters, making it harder to register to vote or vote by mail is antithetical to who we are as as a country.

My colleague and dean of the House Democratic Caucus Senfronia Thompson articulated it well. How can Americans try and promote democracy abroad but not reflect on what we are doing in our own country? I hope that our efforts in Texas this week will add impetus and urgency for Congress to pass strong federal legislation to prevent subsequent voter suppression bills and stop discriminatory and unfair redistricting. 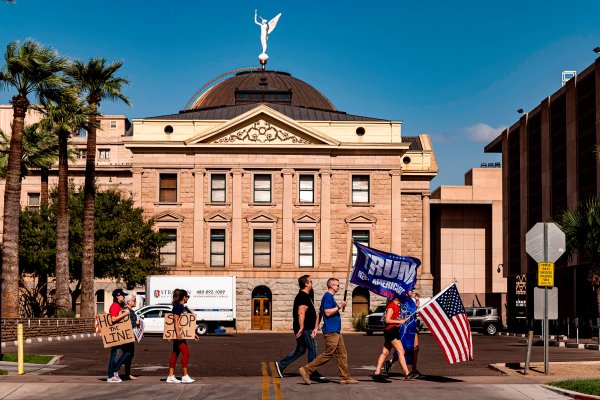