Pfizer-BioNTech Report 'Encouraging' Data on the Efficacy of Booster Shots

Pfizer-BioNTech said in a statement on July 8 that data from studies looking at the effects of a booster shot of its COVID-19 vaccine are “encouraging.” The companies are testing a third dose of its two-dose regimen—currently permitted by the U.S. Food and Drug Administration (FDA) under an emergency use authorization—to see how effective the added shot might be in controlling variants of SARS-CoV-2 that are now overtaking the original virus that the vaccines were targeting.

Early data from those studies showed that a booster dose, given six months after the second dose, triggers five to 10 times the level of virus-neutralizing antibodies as the two-dose shots against the original virus and against the Beta variant, which was first identified in South Africa.

That’s reassuring given a recent statement from Israeli health officials saying that they’ve seen the level of vaccine-induced protection from the two-shot Pfizer-BioNTech regimen start to decline after about six months. Part of that may have to do with the rise of the Delta variant, which is more transmissible; adding another dose could increase the longevity of high-level immunity.

The Pfizer-BioNTech studies do not directly address the Delta variant, which is now the dominant version of the virus in the U.S., but the companies say they are also developing a new vaccine designed specifically to target the Delta version of the virus. The companies are also testing a vaccine they developed against the Beta variant and expect data from those studies in coming months.

The two companies plan to submit their booster data to the FDA to request that a third dose be added to the current regimen. 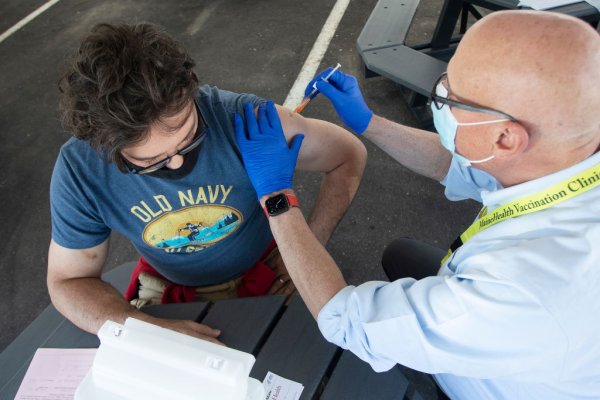 I Got a J&J Vaccine. Should I Get a Booster Shot as Delta Spreads?
Next Up: Editor's Pick