Washington has hardly missed the rancor and disingenuous narratives about the 2012 terrorist attack on American outposts in Libya and the 10 separate investigations into it. The political circus it sparked here in Washington is one for the ages. Republicans’ quest for evidence that then-Secretary of State Hillary Rodham Clinton was to blame for the deaths of four Americans halfway around the world set a new standard for tenacity, and Democrats’ tolerance for the theatrics shocked the city. Republican Leader Kevin McCarthy made little effort to hide the campaign’s true goal of hurting Clinton’s chances to win the White House.

Well, if Republicans get their way, Washington is going to run this playbook again. Only this time, Republicans will be looking to gum up the truth from a defensive crouch, trying to convince the public that it’s Democrats acting irresponsibly in their investigation into the Jan. 6 insurrection at the U.S. Capitol that left five people dead. But instead of Hillary Clinton sitting in Washington, 5,200 miles away from events unfolding in Benghazi, Congress has a chance to consider the role Trump played in stage-managing the crisis from about a mile down the road.

First, a primer on Benghazi and its aftermath. Late on Sept. 11, 2012, a mob descended on a diplomatic facility in Libya and, later, a CIA station. Four Americans, including Ambassador Chris Stevens, died. Amid the confusion, talking-points about what went wrong were circulated until they became messier than a state-fair demolition derby. Clinton didn’t want to do the Sunday shows and Rice was deputized to be the face of the Obama Administration. No one can credibly accuse Rice of misleading the American people, but she acknowledges in her 2019 memoir that she could have been more precise in her language, or just left out some of what was unclear, even to her.

What followed was a case study on how to exploit an incident for maximum political gain. Hours of interviews, testimony and innuendo flooded cable news. Clinton took responsibility for the security lapses—though she did nothing wrong. The right-wing media space created a parallel narrative, largely divorced from reality, that this was all Clinton’s fault. In the false narrative, there were orders issued by Clinton to stand down from protecting the U.S. compound in Libya, as depicted in harrowing books and movies, and a conspiracy to then mislead the American public about what transpired heading into the 2012 elections. It didn’t matter that Clinton repeatedly testified about her role; there was enough to make a GIF of her seeming to lose patience and that was all her ardent critics needed.

In all, the FBI, a State Department panel, the Senate Homeland Security Committee and the Senate Intel Committee each ran their own, mostly fair probes. The five House committees—led by Republicans—got their bite, too. Still not satisfied, Republicans launched their own special committee—the United States House Select Committee on Events Surrounding the 2012 Terrorist Attack in Benghazi—to take one more crack at proving Clinton’s culpability.

That brings us back to current events. House Speaker Nancy Pelosi had sought to name a non-partisan, apolitical special commission to investigate what happened on Jan. 6 at the Capitol, similar to the body that was set up after the Sept. 11, 2001, terrorist attacks. An astonishingly large number of Republicans—35—joined Democrats to create the panel in the House, but it failed in the Senate because only six Republicans voted in favor of it.

Having come up short, Pelosi’s backup option was to set up the House Select Committee to Investigate the January 6th Attack on the United States Capitol, to be comprised of 13 members. Pelosi has named her eight: seven Democrats and Republican Rep. Liz Cheney, who lost her leadership post for not buying the Big Lie that Trump was actually the winner in 2020. Pelosi has veto power over any of Republicans’ five remaining picks, which moves the committee into a partisan bullseye as the committee looks to have a 7-6 Democratic tilt.

And in this, House Minority Leader McCarthy has Benghazi as a reference point. Republicans had so tainted themselves in partisanship with Benghazi that they dropped all pretense of actually believing they were uncovering relevant facts. McCarthy understands that if he sends conspiracy theorists to Pelosi, she will surely reject them and give Republicans yet another grievance to fly high and loudly on Fox News. If he doesn’t send anyone—as Pelosi herself considered briefly during Benghazi—it is a unilateral signal that the panel doesn’t matter.

So what McCarthy may end up doing is following Pelosi’s example on Benghazi and send a professional but loyal member of the party. Doing so shows he recognizes the threat the committee poses to Trump, who remains the most powerful figure in the Republican Party and the frontrunner for the GOP nomination in 2024. Without Trump, McCarthy’s dreams of becoming Speaker after the 2022 midterms are moot. Pelosi sent Rep. Elijah Cummings to hold steady when Republicans veered wildly during Benghazi. McCarthy could find a comparable figure in a hard-nosed opposition leader like Jim Jordan or Elise Stefanik, who could prove reliable objectors.

Republicans in the lead-up to 2016 gave Americans a masterclass in how to conduct an investigation primed for political exploitation. Now, they’re going to try to convince Americans that Democrats are doing it themselves. The GOP chose to drive the Jan. 6 probe squarely into political territory by spiking an apolitical commission. Washington now faces the choice if its leaders are going to give the Republicans the tainted outcome they seem to chase. 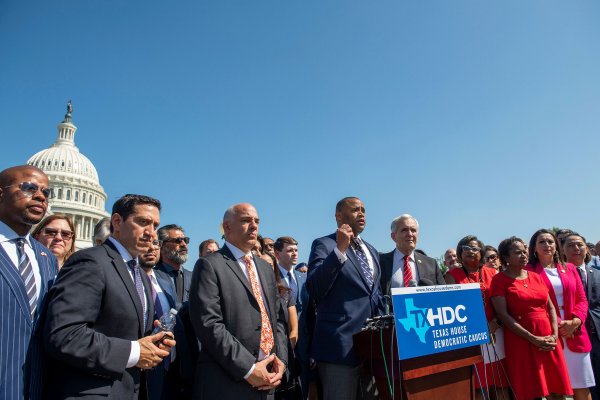 Renegade Lawmakers May Be No Match for Trump’s GOP
Next Up: Editor's Pick