Are you back in the office yet? has replaced Are you vaccinated yet? as the question of the day for a broad swath of U.S. society.

Nationwide, about one-third of workers have returned to their offices, according to the most recent data from JLL, a global real estate giant that is anxiously tracking attitudes about how people are feeling about going back to working in an office. In Austin, Dallas and Houston, about 50% of office workers are back at their desks. However, in New York City only 21.9% of workers are back, while in San Francisco, just 19.2% of employees have returned, according to JLL.

Big Tech companies are “walking back return-to-office plans after employee backlash,” in contrast to financial firms like JPMorgan and Goldman Sachs, the company found.

The firm’s research also found that working from home, particularly for women, has completely eviscerated the boundaries between work and people’s personal lives. For many women, restoring that sense of separation is the prime driver in returning to the office. For men, the main motivation for getting back to the office is to restore a sense of routine and seeing colleagues. Other findings included that most people wanted to return to the office three days a week, and that flexibility had overtaken salary as the No. 1 concern of workers at this moment in time.

Neil Murray, CEO of Work Dynamics at JLL, which is focused on the future of work, expects most companies to eventually adopt a flexible hybrid model. He points out that many businesses “were working in a kind of hybrid way, pre-pandemic. I used to go into the Chicago office every Friday, and it was kind of me, myself and I, and a few people that didn’t want to be at home.”

In many cases, the offices where people will return will be configured differently. Clients are asking, “How do we make space more fluid, how do we make it welcoming, how do we make more collaboration space, drop-in space, café space?” says Murray.

Every chief executive in the world has a view on real estate. They didn’t 18 months ago.

How bad did it get from a commercial real estate perspective?

As a real estate company, we’ve been through a couple of world wars and global financial crises, but we’ve never been in a scenario where every office on the planet is emptied out. We looked at every eventuality: Were people ever going to come back? As a firm that specializes in real estate, we had some soul-searching to do.

You operate globally. What are you seeing around the world?

Most countries in Asia now are back to pre-pandemic levels, as if nothing happened. We can’t draw too many parallels, but we always had something in the Far East in our business that was pointing toward where the world was going.

In the U.S., what were the various stages that companies went through in thinking about their real estate footprint?

We definitely had these phases of people feeling comfortable and excited about being home. CEOs of some of the biggest companies in the world were saying, “This is wonderful. I’m not sure we need all this space.” Then toward the end of the summer [2020], the fatigue started to set in. We felt a distinct change in sentiment.

I had a financial-services client telling me that error rates in the business were starting to shoot up. Engagement rates, right across all of our clients and our own, were starting to dip. People are feeling alone; mental-health issues were surfacing. More chief executives then were coming out and saying, “We’re gonna be back to the office.” Several high-profile financial-services companies in particular said, “You know, we’re a work-from-work company. We’re going back.”

Companies were cutting footprint pre-pandemic. It was pretty commonly acknowledged that most companies had about up to 40% underutilization of space, pre-pandemic. What I mean by utilization is not occupancy; utilization is the next level of detail. Technology and access to data helped us understand over the last few years how buildings were really being used. And I think there was a realization across the board that having increased density of people over time, working toward more and more people getting into spaces, that we had a utilization problem.

Offices were getting more tightly packed but used less efficiently?

We’ve been densifying for the last 25, 30 years. I have spoken to heads of real estate that wore a badge of honor to say, “We’re down to 100 sq. ft. per person! We’re sardining them in!”

We were predicting pre-pandemic that, at some point in 2030, that up to 30% of office space would be occupied by flexible working space [provided by third-party, WeWork-like companies]. This was a trend beforehand: “I’ve got too much space, and it’s in the wrong place.” The pandemic accelerated a lot of trends we’ve been seeing, but I don’t think it profoundly changed much.

How has the pandemic changed how companies are thinking about their office design and layout?

There’s a realization that it is a manifestation of brand and culture. The office is a bringing to life of how you’re trying to portray your company, what you believe in, your sense of purpose, what you’re about. Every one of our clients, without exception, is thinking about, “What do we need to do with this space now to make it work for a new world, to attract and retain talent, to use it as a differentiator to have people want to come in and work here?”

This is an age of workers having choices, and it’s a point of differentiation.

How are people feeling about work in general now?

Our HR colleagues talk about a staff-turnover tsunami. Nobody has left their jobs [during the pandemic], so you’ve got some pent-up kind of movement. You’ve also got a lot of people asking why, and questioning how they do things and questioning their life, and how they’ve how they’re working and living. There’s been a lot of soul-searching over the last 12 months, and as a result, I think companies have to work harder to attract and retain talent.

Your research shows that flexibility is currently very high on the list of considerations for workers.

I’ve never really paid much heed to the purported differences between millennials and Gen Xers or whatever else, but certainly what are referred to as Gen Z, new people coming into the workforce, have different expectations in life. What you and I thought of as ambition and career progress are thought of in different ways. They value flexibility; they value fluidity in their careers. My father worked in the same place for 50 years, and that was how you did things.

What about the environmental footprint of offices?

Sustainability is coming to the fore as never before: the concept that, actually, we do have a responsibility to provide great spaces with clean air. We’ve talked about indoor air quality in our industry for as long as I’ve been in it, 30 years. Nobody’s really done much about it, but now it’s real.

This can’t be underestimated: the fact that corporate demand for green space is ever increasing. The vast majority, 90%, of our corporate clients have made some sort of carbon commitments, publicly, so the demand for it is probably the most important trend of the industry. Companies are looking at their space and saying, “Does this really reflect who we want to be as a company?”

What specifically is in demand?

They’re asking for low-energy-use buildings. They are asking, “How is it ventilated, heated, how is it cooled?” It’s less about the materials and embedded carbon, and more about how the building functions, so: light, sound, energy use.

How will this green movement impact the valuations of buildings?

When you start to see a delta emerging in the valuations of a building based on its energy usage, that’s when the investor community really changes gears.

Obviously you have a vested interest, but do you remain bullish on commercial real estate?

Human beings need other human beings. We need to be around each other, and that’s why we feel good about the future of the office. 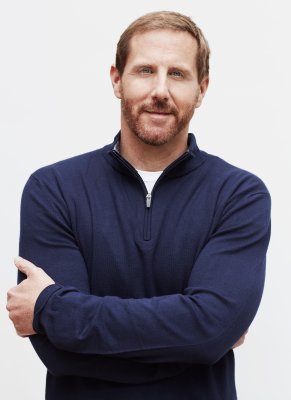 Beyond Meat's CEO Ethan Brown on a Plant-Based Future
Next Up: Editor's Pick