Illustration By Courtney Cook for TIME
Ideas
By Courtney Cook
Cook is the author and illustrator of The Way She Feels: My Life on the Borderline in Pictures and Pieces

Every morning as I drink my coffee, I check Timehop, an app that tells me what I posted to social media on this day one, two, ten years ago. I have checked Timehop every morning for the last 1,286 days—more than three years straight—and nearly every one of those 1,286 days, I have found something I now find overwhelmingly embarrassing that I have rushed to scrub from whatever platform it dared to exist on.

Anyone who knows me knows I am Very Online. I think my compulsion to be overly active on the Internet partially stems from the fact that I grew up in the era of the Internet where every event, even if the “event” was sitting around a mall food court, needed to be documented by at least 30 photos and its own MySpace or Facebook album named after an inside joke created at said food-court hang, and partially because I have borderline personality disorder, which causes me to have an extreme fear of being abandoned or forgotten. To constantly post on whatever social platform is popular at the moment is to constantly show up on my friends’ feeds is to constantly remind them of my existence.

For around 23 hours and 56 minutes of each day, I am completely comfortable and cool with my online presence. But for those approximately 4 minutes when I check Timehop and see my past self from an outside perspective, I want to hurl myself off a cliff and live the remainder of my life as kelp or seafoam.

Read more: The Pandemic Made My World Small. Social Media Helped Open It Up

I often feel sick by the amount of work it would take if I wanted to erase my presence from the Internet, even though I do my very best to trim it down. Another symptom of borderline personality disorder is an unclear sense of self, and this is nauseatingly blatant in the posts I see each morning. I don’t delete these past posts because they’re problematic, or offensive, or because I regret what I shared; I delete them because I’m embarrassed that I don’t recognize who I was, or was trying to be.

In 2009, I was heavily entrenched in emo/scene-kid culture, and my social media was littered with status updates like “XxXx*~RAWR~*xxXx means i LUV U in dinosaur XDDD.” In early 2010, I adopted some cottagecore fairy fantasy after returning home from 10 months in a residential treatment center where I didn’t have access to electronics or the Internet, and I began posting about spending my days “climbing trees” and “flying kites,” two things I definitely wasn’t doing, and yelling at people to “get outside!” because “the world is passing you by!!!” even though I was very much inside and not offline. By late 2010, I had smoked weed exactly once and proclaimed myself a stoner, posting Kid Cudi lyrics to Facebook in a way that can only be described as poser-y. In 2011, I transferred to a private arts high school and adopted Tumblr as my religion. All my posts from this time talk about listening to the Pixies (to this day I cannot name a Pixies song aside from “Where Is My Mind”), drinking tea (I didn’t and do not drink tea) and reading Sylvia Plath’s poetry (I didn’t get into Plath until college).

Maybe when I say that these posts embarrass me, what I actually mean is that they make me sad. Watching my past self try on different personalities in hopes that I would be accepted, or loved, or find my place in the world, is a big bummer, and this is exacerbated by the fact that when I was posting these things and undergoing these identity changes, I didn’t know I was putting on a performance at all. Even when I was conscious that I was changing everything about myself, I believed I was motivated to do so because I had found the real me. I was the Girl Who Cried THIS IS WHO I REALLY AM!!!!

There is that saying: wherever you go, there you are. This remains true even if you don’t know who that you really is. The way I exist in the world feels different now than in the past, both on and offline, though I can’t really identify why that is or what led to that change. Perhaps it’s due to 13 years of intensive therapy, or finally finding helpful medications. Perhaps it’s a result of growing up and having enough time to see what stuck around and continued to hold my interest even after the phase it originated from was rejected or replaced. Perhaps it’s a bit of all of these things, and others I’m not aware of yet, or may never be.

Read more: I Thought I Was Doing Pretty Well. Then Came the Pandemic

These days, my Timehop shows mostly memories from one, two, maybe three years ago. They rarely trigger the telltale knot in my stomach most of my earlier posts did, which I’d remedy with their deletion. Though these recent posts aren’t necessarily what I’d choose to post now, they don’t feel like they were posted by a stranger. Rather, they feel more like a childhood friend I both love and have outgrown. I don’t need to delete them to prove to myself that I’ve changed, because I’m able to acknowledge who I was then doesn’t cancel out who I am today. That’s not to say the embarrassment over my old posts has vanished, or that I’ve entirely stopped deleting them, but most days I will archive a post or update its privacy settings rather than choose to erase it forever.

Sometimes, a rare post from further back in time has slipped through the cracks, and seeing it fills me with nostalgia. If I can move past embarrassment and feel the pain that comes with acknowledging how sad and lost I used to be, then I can also move past that pain and remember what it felt like to live in those moments when I wasn’t putting on an act or playing a role. Because within many of the memories that are clouded by my past self’s inauthenticity, and the years I have categorized as lost to sadness, self-harm and the wish to jump from a cliff and not become kelp but to become nothing at all, there are glimmers of happiness and what I recognize as the beginnings of who I am now. I just have to strain a bit to see them.

When one of these posts that’s managed to escape the Great Daily Deletion appears, I begin to wish I hadn’t deleted most of those posts at all. I think that maybe if I hadn’t rushed to delete them, I could have gotten to the point where the first thing I thought of were those happy memories without having to wade through that sadness first.

When social media was just beginning, there were constant warnings urging you to remember that everything you post will exist somewhere in cyberspace forever, even if it’s deleted. This may be true, but I’m not equipped with the skills necessary to find where all that I’ve deleted has gone. Like those past versions of myself, those posts now exist only in my memory, or the memories of those who were there to experience that moment or iteration of myself with me.

So I keep tweeting, saving Snapchats, posting to Instagram, filming TikToks, updating my Facebook profile. Even if these posts end up deleted in a year or two. Even if they may make me embarrassed or sad or I one day don’t recognize who I was, am now, as I write this. Maybe I’ll forever be the Girl Who Cried THIS IS WHO I REALLY AM!!!! But I swear, this time I mean it. And I want to remember. 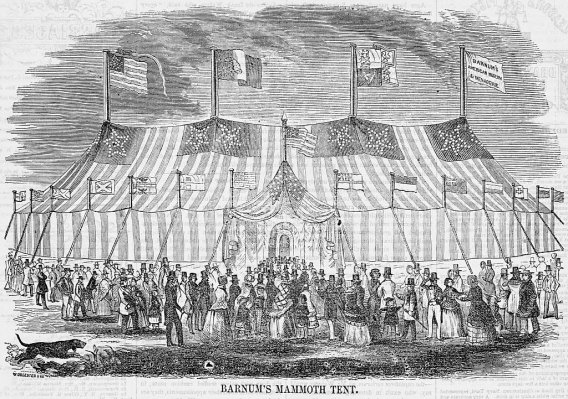 Why the Golden Age of the American Circus Began to Fade
Next Up: Editor's Pick