The Department of Justice (DOJ) announced Friday that it would sue Georgia over the restrictions included in its new and expansive voting law, known as SB 202, marking the federal agency’s first significant action against GOP-backed voting restrictions that numerous states have passed since the 2020 election.

“Changes to Georgia’s election laws were enacted with the purpose of denying or abridging the right of Black Georgians to vote on account of their race or color,” Attorney General Merrick Garland alleged in a press conference. The Justice Department argued that many of the wide-ranging law’s provisions are discriminatory, including those that cut down on drop box access in urban areas with high minority populations, impose stricter voter ID requirements for absentee ballots, shorten the time frame for voters to request absentee ballots and significantly limit the use of provisional ballots in out-of-precinct voting.

The suit is a major step by the DOJ towards combating the surge of restrictive voting laws and pending bills that have moved through state legislatures over the last year. As of June 21, 17 states have enacted 28 restrictive voting laws; more than 380 bills have been introduced in 48 state legislatures in this year’s legislative sessions, according to policy institute The Brennan Center for Justice. The lawsuit also marks a sharp departure from how the Trump-era DOJ had approached voting laws.

“The Department of Justice has been largely missing in action with regard to voting rights over the last four years,” says Gerry Hebert, the senior director of voting rights and redistricting at the nonpartisan nonprofit Campaign Legal Center (CLC) and a former attorney in the DOJ’s civil rights division from 1973 to 1994. “This announcement, I think, shows that Attorney General Garland and the team that he has working for him are serious about the challenges and restrictions on the right to vote.”

Kristen Clarke, assistant attorney general for civil rights at the DOJ, alleged that Georgia’s law violates Section 2 of the Voting Rights Act—which prohibits racially discriminatory voting laws—and not only has a disproportionate impact on voters of color but includes several provisions that were “adopted with the intent to deny or abridge Black citizens equal access to the political process.”

The four most populous Georgia counties—Fulton, Gwinnett, Cobb and DeKalb—had more than 100 drop box locations for voters in the 2020 presidential elections, Clarke continued. Under SB 202, which for the first time codifies the use of drop boxes for voting, that number is expected to drop to roughly 20. (They were previously a temporary measure used during the last elections because of the pandemic.) Georgia’s Secretary of State Brad Raffensperger has pointed out that more than 30 Georgia counties didn’t provide a single drop box in 2020 and the law requires each of them to now have one. But voting rights advocates note that the law also requires them to be inside in-person early voting locations—thereby reducing accessibility.

Clarke also highlighted the disproportionate effect on Black voters caused by limiting most out-of-precinct votes—pointing out that Black voters are more likely to end up at the wrong precinct because they move frequently and are more likely to deal with polling site closures. “SB 202 reduces the chance that those eligible voters will have their ballot counted,” she said. And she called the prohibition on non-poll workers handing out food and drink to those standing in line within 150 feet of a polling place or within 25 feet of any voter standing in line “a needless ban passed with unlawful discriminatory intent.”

Georgia’s Republican Gov. Brian Kemp has defended the law, arguing that such measures will make it “easy to vote” and “hard to cheat.” Raffensperger has said he looks forward to “beating [the DOJ] in court.”

“The Biden Administration continues to do the bidding of Stacey Abrams and spreads more lies about Georgia’s election law,” Raffensperger continued in a statement on Friday in response to the lawsuit. “It is no surprise that they would operationalize their lies with the full force of the federal government.” (Republicans have failed to show evidence of the widespread fraud falsely touted by former President Donald Trump when pressed about the reasons for passing such restrictions.)

Read more: We Must Reclaim Voting Rights as a Moral Issue

In Friday’s press conference Garland also indicated that the DOJ is evaluating whether to bring legal action in response to similar laws and proposals in other states. “This lawsuit is the first of many steps we are taking to ensure that all eligible voters can cast a vote, that all lawful votes are counted, and that every voter has access to accurate information,” Garland said. “Where we believe the civil rights of Americans have been violated, we will not hesitate to act.”

The prospects for the DOJ lawsuit in the courts remain unclear. However the “DOJ files lawsuits only after careful study of the facts and law,” explains Barbara McQuade, former U.S. attorney for the Eastern District of Michigan and a professor at University of Michigan Law School, in an email. “They likely handpicked Georgia from among all of the states with new voting restrictions because they believed it provided the strongest likelihood for a successful legal challenge.”

For voting rights advocates like the organization Black Voters Matter, which rallied against the Georgia law, the DOJ’s move is an “affirmation of the work we do each and every day to protect voting rights” and a “stern warning to other states.”

“Any state or local governments pursuing voter suppression legislation must be prepared to defend Jim Crow in court, because we simply will not let this go,” the group’s founders, LaTosha Brown and Cliff Albright, said in a Friday statement.

The DOJ has brought the suit under the Voting Rights Act of 1965, the most important federal legal protection for ensuring equitable voting laws. The Supreme Court gutted the previously-powerful Section 5 of the VRA in 2013’s Shelby County v. Holder, effectively stopping the DOJ or district courts from reviewing changes to voting laws made in jurisdictions with histories of racial discrimination. Section 2 of the law remains enact, however, allowing challenges to laws on the basis of a racial discrimination. By filing a lawsuit under Section 2, the DOJ is “putting some teeth” into it, says McQuade.

The administration also seems to be signaling that “it is willing to use Section 2” more proactively “now that Section 5 is unavailable,” adds Richard Briffault, a professor of law at Columbia Law School, in an email.

But the power of Section 2 could be curtailed by a major case currently pending before the Supreme Court, Brnovich v. DNC, which centers on how broadly the section should be read when evaluating laws. And there’s also a chance the DOJ’s suit will make it up to the Supreme Court. Georgia lawmakers might feel comfortable taking their chances appealing a ruling until it reaches the court’s conservative majority, legal experts say, especially if it rules in Brnovich in a way that weakens the VRA.

The DOJ’s announcement of the Georgia lawsuit comes just days after Senate Republicans blocked a major Democratic-backed voting rights bill, the For The People Act, that would revamp America’s election system and expand access to the ballot. In his press conference, Garland called on lawmakers to work towards strengthening the Voting Rights Act, pointing out that had it retained its original enforcement mechanisms the Georgia law might never have come to fruition. “If Georgia had still been covered by Section 5, it’s likely that SB 202 would never have taken effect,” Garland said. “We urge congress to restore this invaluable tool.”

“I think [the suit] shows that [Garland] is making voting rights a priority for the Department of Justice, as it should be,” says Hebert.

The original version of this story misstated Garry Hebert’s last name. It is Hebert, not Herbert. 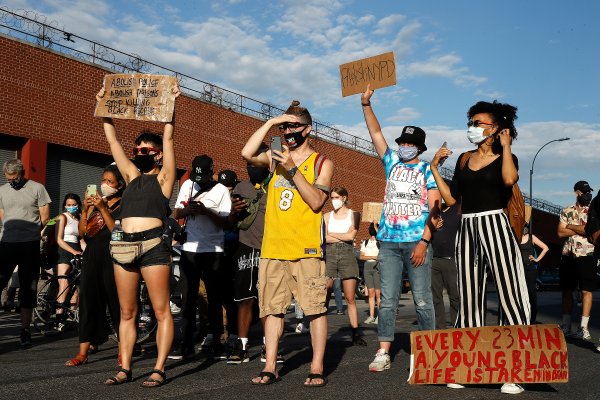 After His 2020 Death in a New York Jail Cell, Jamel Floyd's Family File Lawsuit Against Bureau of Prisons
Next Up: Editor's Pick