Associate Justice Stephen Breyer sits during a group photo of the Justices at the Supreme Court in Washington on April 23, 2021.
Erin Schaff—POOL/AFP/Getty Images
By Philip Elliott

The frustration in Supreme Court Justice Stephen Breyer’s voice during a Tuesday afternoon lecture at Harvard back in April was unmistakable. Speaking to his alma mater, the senior liberal member of the nation’s high court betrayed moments of impatience with the grumblings that it was time for him, at age 82, to step down and give President Joe Biden a chance to nominate another reliable vote against the current 6-3 conservative majority. “Do your job,” Breyer told students and faculty at Harvard Law. “I would add that in doing so, don’t look for or expect popularity.”

His advice was aimed at those who want to be judges themselves some day. But it may also have been a bit of a pep talk to himself. Three days after speaking remotely to Harvard, a group of liberal groups hired a truck to drive around the Supreme Court with a direct message to the Justice: “Breyer, Retire.” A week later, Rep. Mondaire Jones of New York became the first member of Congress to sign-on to that message. These days, Rep. Alexandria Ocasio-Cortez of New York has lent her progressive credibility to that push and Twitter seems to already be planning Breyer’s retirement party.

The pressure has only grown more intense after Senate Minority Leader Mitch McConnell last week vowed to block any potential Biden Supreme Court nominee in the lead-up to the 2024 election, and if Republicans control the Senate calendar after the 2022 midterms. With Democrats and Republicans each currently at 50 seats apiece and Vice President Kamala Harris breaking the tie in Democrats’ favor, even the slightest shift in the balance of power could tilt the Senate—and the Court—further to the right.

Progressives, still smarting from McConnell’s refusal to even have a hearing for President Barack Obama’s 2016 nominee to the Court, don’t want to give McConnell another opportunity to—in their mind—steal a seat from the party in the White House. (McConnell has fastidiously maintained that history says election-year Supreme Court nominees are considered only when the same party controls the Senate and the White House, otherwise the nomination can be tanked. He has been intentionally vague on what a Biden nominee would face, say, in 2023.)

Breyer, no doubt, gets that. He has been fairly vocal about how confirmation hearings have become too partisan and how journalists identify the Presidents who nominated the jurists as though that dictates their allegiances. He bemoans a widespread willingness to describe the Justices’ judicial philosophy through a political lens. He clearly understands the politics surrounding judicial nominations after an earlier career that featured stints as Watergate prosecutor and Sen. Ted Kennedy’s counsel on the Judiciary Committee. But as a nod to just how much things have changed since then, Breyer won confirmation to the Supreme Court by an 87-9 vote; the most recent Justice to win confirmation, Amy Coney Barrett, did so by a 52-48 vote.

Which is why the dual pressures from the Democratic left and McConnell’s not-so-subtle threat from the right may keep Breyer in the job. Breyer hates that the Court has become political. The so-called “strategic retirement” isn’t an idea that seems to appeal to him. Justice Ruth Bader Ginsburg stayed in her robes while battling several health scares on Obama’s watch, seemingly determined to retire when Hillary Rodham Clinton could make the nomination. Instead, Ginsburg died on the bench and President Donald Trump replaced the liberal icon last fall with Barrett, a conservative jurist in her 40s who now stands to shape American law for decades. (Fun fact: Bill Clinton was deciding between Breyer and Ginsburg in 1993 for his first Supreme Court nomination; Breyer lost out to Ginsburg in his first at-bat, with Hillary Clinton a major factor in that choice.)

Breyer himself described how considering politics actually damns the Court in the public’s mind. Behaving like “political officials, or let’s call them junior politicians rather than jurists,” only erodes confidence, he said at Harvard. “If the public believes to the contrary, if they think we’re just politicians, we should not be surprised if political parties, too, see in the nomination of a judge an opportunity to extend their political influence. Nor should we be surprised that proposals for structural change at the Court become a topic of general public concern.” The almost-two-hour Harvard speech could only be read as a cease-and-desist threat against those who want to put him to pasture or to expand the Court’s membership. “If the public sees the judges as politicians in robes, its confidence in the courts—and in the rule of law itself—can only diminish,” Breyer said, “diminishing the courts’ power, including its power to act as a check on other branches.”

Breyer is an institutionalist. With only three more public days calendared for this term of the Supreme Court, Washington is watching. Breyer is not one to be bullied into retirement, by liberals or McConnell. It’s why Washington took note when he hired a full slate of four law clerks for the Court’s next term. With this newsletter’s gratitude and a hearty hat-tip to Above the Law’s David Lat for the history lesson, three of the last four Justices to step down had dragged their feet on hiring a full slate of clerks in the lead-up to their retirements, and there’s reason to believe the fourth was an outlier. Put simply: Justices don’t recruit and hire the future short-listers for seats on the Supreme Court to pull the rug out from under them. For that and other reasons, Lat puts the odds of Breyer remaining a Justice for the next term at 70-30. That means he probably should RSVP yes to October’s Red Mass. (Yes, Justice Breyer, who is Jewish, has attended the Roman Catholic liturgy before the Supreme Court opens its term.)

It doesn’t stretch the imagination to say Breyer might be ready to step down. He’s the oldest Justice on the nine-person Court and its second-longest-serving member. He’s certainly earned the right to step away from the marble temple. Retirement would still afford him a single clerk and an opportunity to serve as a guest judge throughout the federal court system to keep busy. He’d be free to teach, as he did at Harvard in the 1960s and 70s, or to write a third mass-market book. He’s been a judge since 1980, and a Supreme Court Justice since 1994. Absent this political climate, he may well be ready to head home to Cambridge, Mass., and simply make pot roast. If only politics would let him retire on his own terms. 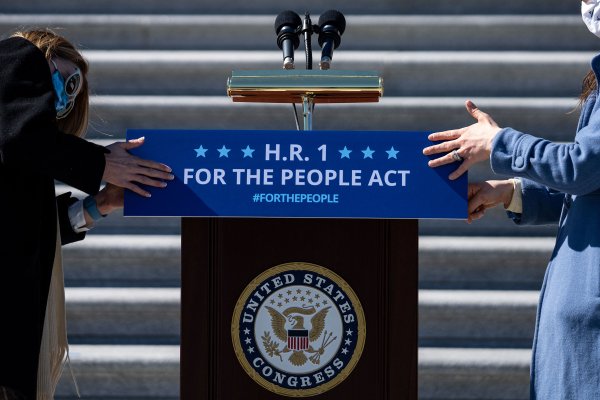 Why Popular Bills Keep Dying in the Senate
Next Up: Editor's Pick