How Republicans Have Packed the Courts for Years

Justices of the U.S. Supreme Court during a formal group photograph at the Supreme Court in Washington, D.C., U.S., on Friday, April 23, 2021.
Erin Schaff—The New York Times/Bloomberg/Getty Images
Ideas
By Jackie Calmes
Calmes is the White House editor for the Los Angeles Times. She is the author of "Dissent: The Radicalization of the Republican Party and Its Capture of the Court."

While Republicans lately have been attacking Democrats for plotting to “pack” the federal courts with like-minded judges, their party has been doing it for years.

Through bare-knuckle tactics in the Senate, an animated base of voters and an institutionalized and well-funded pipeline for judges, Republicans have stocked the federal bench at all levels with conservatives who share the right’s support for whacking at the wall between church and state and at the powers of federal regulatory agencies, banning abortion and expanding gun rights.

Republicans’ ruthless success in the judicial wars is most evident on the highest court in the land. As the Supreme Court with its new 6-3 conservative majority ends its term this month, the question for court-watchers isn’t whether it will rule in a conservative way. It’s how far-reaching will those rulings be.

The court’s bent was perhaps most evident in its decision last month to review a Mississippi law generally barring abortions after the 15th week of pregnancy, after two lower courts ruled the statute plainly violated Supreme Court precedents that the Constitution protects a woman’s right to have an abortion until a fetus is viable. The case will be decided in the court’s next term that starts in October.

Last week, the court ruled in favor of a Catholic agency that refused to place foster children with same-sex couples (though its unanimous opinion turned on a technicality, not on conservatives’ favoritism of Christians’ religious liberty). Yes, the court voted 7 to 2 to uphold Obamacare, Barack Obama’s signature healthcare law, yet this third challenge from Republicans was so weak that the ruling was little surprise.

Future cases pose opportunities for the Supreme Court’s conservative six-pack not only to roll back abortion rights, but also to expand gun rights, promote freedom of religious expression even in cases of discrimination, and curtail affirmative action as well as regulators’ powers to enforce laws for clean air and water, workers’ safety and more.

The battles continue in the political arena. While Democrats control the White House and Senate, allowing President Joe Biden to fill judicial vacancies, Republicans already are anticipating recapturing the Senate in 2022—and with it the power to block his nominees. Progressives are pressing liberal 82-year-old Justice Stephen Breyer to retire—now—so Biden is sure to replace him (with a Black woman, the president has promised). The left has mostly despaired of adding seats to the Supreme Court, given Democrats’ slim congressional majorities, yet Biden has named a commission to study that idea and others.

Amid this state of play, it’s worth revisiting how Republicans have bested Democrats in filling seats on the federal bench at all levels for years.

Senate Republican Leader Mitch McConnell of Kentucky has made confirming conservative judges his singular focus. In 2018 he described his goal at a gala of the Federalist Society, the four-decades-old legal network that’s become the pipeline for Republican judicial appointees: It’s “to do everything we can, for as long as we can, to transform the federal judiciary, because everything else we do is transitory.”

The previous two Democratic presidents, Bill Clinton and Obama, each left their Republican successors more than 100 openings among the roughly 850 seats on district and appeals courts, because Senate Republicans blocked many of their nominees. The other vacancy Obama famously left was the one that should have gone to his third Supreme Court pick, Merrick Garland, but for McConnell’s brazen blockade in 2016 on grounds that the president elected in November should fill the seat.

Less noted was another nominee Republicans stopped that year, which also had ramifications for the high court—Obama’s choice of Myra Selby, the first woman and African American on Indiana’s Supreme Court, for a federal appeals court. That obstruction allowed McConnell and Donald Trump to put Notre Dame law professor Amy Coney Barrett, a known foe of Roe v. Wade, in the seat in 2017. It would be her waystation to the Supreme Court: Barrett was confirmed to the late Justice Ruth Bader Ginsburg’s seat just three years later.

McConnell’s monomaniacal attention to the courts reflects that of conservative voters, who’ve been passionate about demanding right-leaning judges since the days of the liberal Warren Court in the 1950s and 60s, with its landmark rulings on civil liberties, voting rights, contraception and separation of church and state. Such motivated voters give Republicans an edge in Senate confirmation battles.

Those voters’ pressure ensures that McConnell has the united backing of his party no matter how outrageous his moves to advance what he’s called his “court project.” The right-wing RedState.com approvingly wrote of “the bloody-mindedness” of McConnell and Sen. Chuck Grassley, the Iowa Republican who chaired the Senate Judiciary Committee during Trump’s first two years, “in ramming those nominees through the system.” In 2020, Grassley’s successor as chairman, South Carolina Sen. Lindsey Graham, urged federal judges in their sixties to retire so that Republicans could quickly fill the seats. He rightly feared that the party would soon lose its Senate majority and the presidency.

Trump’s 226 successful appointments to the trial, appellate, and Supreme courts in a single term will stand as one of his foremost legacies, and all but certainly his most enduring.

When Trump left office, his picks comprised one-third of the Supreme Court, 30% of the 13 circuit courts, and more than one-quarter of the judges presiding over the nation’s 94 district courts. He appointed 54 judges to the circuit courts that are the final word on most appeals—just one less than Obama selected over eight years.

Trump’s choices for judges at all levels had one thing in common: proven conservative bona fides. As McConnell had boasted to the Federalist Society, ending the Senate filibuster of judicial nominees had opened the door even to “crazy right-wingers,” who couldn’t have been confirmed otherwise. Democrats have no analog to the 60,000-member Federalist Society, with its deep coffers and nationwide institutional strength.

Some of Trump’s appointees, with life tenure and most of them young, will be on the bench long into this century. Were Barrett to serve on the Supreme Court until her late 80s as Ginsburg did, she would be there until about 2060. His other high court picks, Brett Kavanaugh and Neil Gorsuch, could be there past 2050.

But for Republicans’ unprecedented norms-busting, Trump should have filled just one Supreme Court seat: the one that went to Kavanaugh after Justice Anthony Kennedy retired in 2018. The three Justices he did name—one more than Obama, George W. Bush, and Clinton got to name during two terms—each came to the court with partisan asterisks.

Gorsuch filled a seat stolen from a Democratic president who, unlike Trump, was elected by a majority of voters, twice. Then there was Kavanaugh, speedily confirmed without a full review of his record, despite complaints and some evidence that he’d lied under oath at his earlier Senate hearings to be an appeals court judge, and after credible allegations of sexual assault surfaced in 2018. And finally, Barrett: No justice had ever been confirmed so close to a presidential election. (The previous record was a July vote in 1916.) Just days later, voters would defeat both the president who’d nominated her and, ultimately, the Senate majority that confirmed her. So much for McConnell’s months-long campaign against Garland four years earlier: “Give the people a voice in the filling of this vacancy.”

With the court’s very legitimacy at stake, McConnell’s talk of heeding the people was even more cynical than it seemed. Barrett was the fifth Republican appointee—along with Clarence Thomas, Samuel Alito, Gorsuch and Kavanaugh—to be confirmed by a narrow majority of Senators who, collectively, were elected with millions of fewer votes than the Senators who opposed those Justices.

More dirty pool could be ahead. Last week, McConnell said that if Republicans regain a Senate majority in the 2022 elections, it’s “highly unlikely” he’d allow Biden to fill a Supreme Court vacancy in 2024. He wouldn’t even commit to doing so in 2023.

Jackie Calmes is the White House editor for the Los Angeles Times. This piece is adapted from her book “Dissent: The Radicalization of the Republican Party and Its Capture of the Court,” which was published by Twelve Books on June 15. 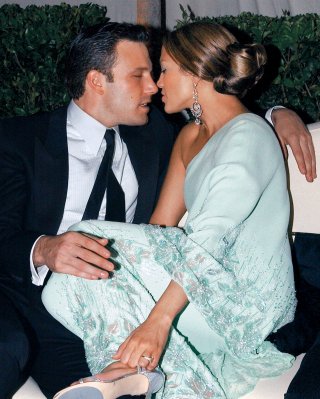 Bennifer 2.0 Got You Pining For Your Ex? Therapists Say Forget It
Next Up: Editor's Pick