The U.S. Is Increasingly Diverse, So Why Is Segregation Getting Worse?

The Detroit, Mich., skyline is seen from Grand River Avenue on October 23, 2019. A new study says Detroit is the most segregated metropolitan area in the U.S.
Jeff Kowalsky—AFP/Getty Images
By Alana Semuels

The integration battles of the Civil Rights era happened more than half a century ago, but the U.S. is getting more, not less, segregated, as that past recedes.

More than 80% of large metropolitan areas in the United States were more segregated in 2019 than they were in 1990, according to an analysis of residential segregation released Monday by the Othering & Belonging Institute at the University of California-Berkeley. The U.S. has become more diverse over time, which has obscured the persistence of segregation, the report finds. Metropolitan areas aren’t all-white, all-Black, or all-Latino, but within metropolitan areas, the different races are clustered in segregated neighborhoods, creating social and economic divisions that can fuel unrest.

“The U.S. continues to be a place of segregation, not integration,” says Stephen Menendian, assistant director at the Othering & Belonging Institute, which studies the roots of social and economic inequality in the United States.

The report breaks new ground by looking at how the racial makeup of census tracts differs significantly from the racial makeup of the larger metropolitan area that surround them. Areas may appear to be integrated because they are home to many different racial groups, when in fact those groups live completely apart. The city of Detroit is 80% Black, for instance, while Grosse Pointe, a suburb that shares a border with the city, is 90% white.

Detroit is the most segregated city in the U.S., according to the report, followed by Hialeah, Fla., in Miami-Dade County, and then Newark, Chicago, Milwaukee, and Cleveland. Only two of the 113 cities with populations of 200,000 or more qualified as integrated—Colorado Springs, Colo., and Port St. Lucie, Fla. Many of the more integrated regions are areas with military bases, the researchers said—because segregation is so prevalent, it takes a concerted government effort to bring different races together.

The COVID-19 pandemic underscored some of the consequences of residential segregation, as Black Americans living in segregated cities like Detroit and Chicago died at a higher rate than people of other races in the same cities.

Read More: How Segregation Fuels the Wealth Gap Between White and Black Americans

But even before the pandemic, research showed that the neighborhood where children grow up shapes how likely they are to go to college and to make more money than their parents. It determines their access to medical care and good schools.

At the height of the pandemic, New York officials said the COVID-19 death rate among residents of public housing projects such as Brooklyn's Bushwick Houses was more than twice that of the city as a whole.
Eric McGregor—LightRocket/Getty Images

The report’s conclusion may not be surprising in a country still reckoning with the persistence of systemic racial disparities laid bare by the death of George Floyd last year. But as many affluent Americans get the freedom to work remotely and live where they like in the aftermath of the pandemic, it calls into question whether the country will only get more segregated as wealthy people flee cities for suburbs.

If nothing else, the report shows that efforts to integrate most of America’s housing—like efforts to integrate its schools—have fallen short. The Fair Housing Act of 1968 prohibited discrimination in the sale or rental of housing on the basis of race, but it had few provisions that would force integration in the same way the Brown v. Board of Education Supreme Court decision did. Its one shot was a provision that directed the U.S. Department of Housing and Urban Development to “affirmatively further fair housing.” Cities using federal money to build public housing were supposed to try to place at least some of that public housing in diverse neighborhoods.

There wasn’t really a way to enforce that until 2015, when an Obama-era rule required that communities evaluate the presence of fair housing and segregation in their communities. It came after a 2015 Supreme Court case that found that the state of Texas erred in placing affordable housing in highly segregated neighborhoods. But the Trump administration shelved the Obama-era rule, and while Biden restored it, it’s not likely that it will move the needle on integration.

Systemic racial factors have long hampered residential integration. White communities kept out affordable housing through zoning laws that prohibited the construction of multifamily or affordable housing. These laws made housing expensive, which meant that Black Americans, long deprived of the right to build wealth through real estate because of redlining, and excluded from educational and employment opportunities, were kept out. Though there were small-scale programs to help Black families move into majority white neighborhoods, they couldn’t reverse centuries of economic inequality.

These attempts to maintain segregation continue today, says Gurian, who is currently litigating a case against New York City over the way it allegedly perpetuates segregation in its housing lottery system. “Jurisdictions themselves know very well that they are segregated,” he said. “The absence of change is not, for them, an absence of information, it’s an absence of will.”

There are about 20 towns in Westchester County, just north of New York City, that are just 3% Black, he says. Meanwhile, in the San Francisco Bay Area, 80 % of the land is zoned for single-family housing.

There are few big policy ideas that could immediately reverse this segregation. Some cities, including Berkeley, have eradicated single-family zoning, making it easier for developers to build more housing within city limits. In practice, that should allow the construction of more housing, which would lower housing prices and allow for a more diverse population. But Berkeley will have to build an almost unimaginable amount of new housing to make prices affordable—a two-bedroom apartment currently rents for almost $3,000, according to the real estate site Zumper.

As the events of the last year indicated, this segregation and inequality could lead to even more unrest. “This country is still in dire shape,” Menendian warns. “The uprisings of the last few years are not going to die down as long as we have a deeply racially unjust and racially segregated society.” 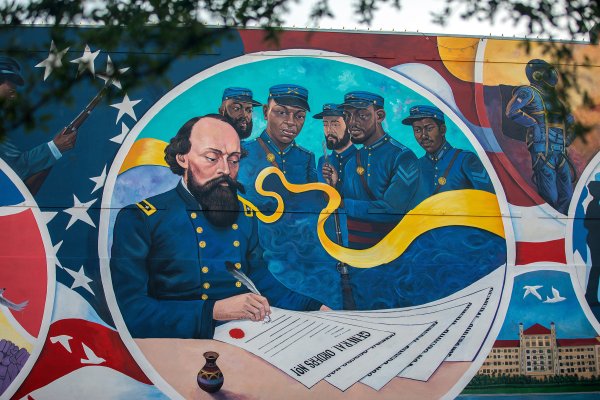 Juneteenth Honors Black Americans Who Created Their Freedom
Next Up: Editor's Pick