'A Mask for Racial Discrimination.' How Housing Voucher Programs Can Hurt the Low-Income Families They’re Designed to Help

Shanna Lee, 34, has been living in this Charlotte hotel room since November; she has a housing voucher that is supposed to help her secure an affordable apartment, but she can’t find a landlord willing to accept it.
Kennedi Carter for TIME
By Abby Vesoulis

The Stay Lodge hotel room in Charlotte, N.C., where Shanna Lee lives with her 3-year-old daughter, Lavi, isn’t much to look at. There’s a queen-size bed pushed up against the wall, a mini-fridge in the corner and a toddler’s pink kitchen play set purchased for $5. The most valuable item in the room sits atop a counter in a plastic sleeve: an unused federal Housing Choice Voucher.

In theory, that little piece of paper would contribute around $512 for a $1,012 two-bedroom for Lee and her daughter, covering the difference between 30% of her income and a unit’s market rate. But Lee, 34, can’t find a new landlord willing to accept it. The last two places that took her voucher failed routine inspections, which meant the local housing agency could no longer pay its portion of the rent. So, by no fault of her own, Lee was evicted. Twice.

Since then, she has spent nearly $500 in application fees applying to at least 10 places, hoping someone would accept her voucher, which used to be known as Section 8 funding. But no luck. “I feel like I’m wasting my time calling because as soon as you say ‘Section 8’: Click. You get a dial tone, or you get an attitude,” says Lee, who usually works a double shift, Thursday through Sunday, as a waitress at the Waffle House. She makes $2.13 per hour, plus tips, and pays Stay Lodge’s $200 weekly rate. “I’m living paycheck to paycheck,” she says.

Getting a Housing Choice Voucher in the first place can feel like hitting the lottery. The U.S. Department of Housing and Urban Development (HUD) allocates more than $20 billion each year to local housing agencies. But that’s not enough to provide vouchers to all who need them. The Urban Institute estimates 25.7 million households are eligible for housing assistance. The average family gets stuck on a wait-list for a year and a half, but many exceed seven years, according to a 2016 National Low Income Housing Coalition report. Some cities, including Charlotte, have temporarily stopped letting people add their names to the wait-lists altogether. “I’ve been on a Section 8 waiting list since I had my first daughter,” says Lee’s sister, Shneila Lee, who relies on a temporary local housing subsidy resembling the federal Housing Choice Voucher program. “She’s about to be 12 this year.”

A third-floor walk-up isn’t ideal for Shneila Lee’s children with special needs, but she worries she won’t find another landlord willing to accept her housing subsidy.
Kennedi Carter for TIME

Once families get their hands on a voucher, they have as little as 60 days to redeem the document before it expires. As both Lee sisters have discovered, that’s harder than it seems. More than a third of families who received new vouchers in Charlotte between 2016 and 2019 couldn’t use them before they expired. A 2018 Urban Institute study found that landlords nationwide often refuse to accept vouchers. In Fort Worth, 78% of landlords contacted by the Urban Institute wouldn’t take vouchers. In Los Angeles, it was 76%; in Philadelphia, 67%.

Landlords’ reluctance stems in part from stereotypes of voucher recipients as lazy, says A. Fulton Meachem Jr., who heads Charlotte’s public-housing agency. “That’s so far from the truth,” Meachem says. “These are families that are working every single day that can’t help the fact that it takes two or three or four jobs in order to afford to live in the city.”

Racism is also a factor. The 1968 Fair Housing Act makes it illegal for landlords to deny tenants on the basis of race, color, national origin, religion, sex, familial status or disability. But there’s no federal law prohibiting them from refusing tenants because of where their rent checks come from. When at least 48% of Housing Choice Voucher recipients are black and 18% are Hispanic, refusing to take vouchers “can be a mask for racial discrimination,” says Senator Tim Kaine, a Virginia Democrat. He imitates landlords’ argument: “‘Oh, no, we’re not discriminating based on race. We just don’t take vouchers that are disproportionately used by minority families.’”

The result is a benefits program that often doesn’t benefit anybody—and reveals the paradox of America’s housing crisis. At a time when one-quarter of American renters are spending more than half their incomes on housing, even the working families lucky enough to receive federal housing assistance often still end up without a roof over their heads.

The dilemma is decades in the making. For nearly a century, key government programs have explicitly excluded minorities, creating a system in which white families were able to purchase houses in suburban areas, build equity and pass down wealth to their kids, while families of color couldn’t. The 1934 National Housing Act, for example, transformed the housing market by offering federally backed mortgages. But families of color were denied access; appraisers were warned to consider how “socially or racially inharmonious groups” in predominantly white neighborhoods would affect neighborhood appeal. For decades, agents used color-coded maps on which black and mixed-race neighborhoods were shaded red to determine where to issue loans. Red-lining, as the practice was known, was outlawed in 1968. But discrimination hasn’t disappeared.

“George Wallace is no longer here stopping individuals from coming places,” says Meachem, referring to the segregationist former governor of Alabama. “But it has now been reborn in policy. So we got little George Wallace policies in these cities that are in a lot of cases invisible to people.”

A 2018 Consumer Financial Protection Bureau report found that people of color are still disproportionately denied mortgages: 18.4% of black applicants and 13.5% of Hispanic applicants were denied, vs. an 8.8% denial rate for white applicants. Today, the home-ownership rate among black households is just 7% higher than it was in 1950.

It used to be that people in need of an affordable home, like Lee and her daughter Lavi, were directed to public-housing facilities. But President Richard Nixon put a moratorium on the construction of new projects in 1973 and shifted HUD’s focus to giving families Section 8 vouchers to offset rental costs in the market.

Private landlords have never loved the plan. That’s in part because of bureaucratic delays. While typical tenants sign leases and submit their first month’s rent within days, voucher holders in some cities can wait weeks for local housing agencies to verify ownership of the property, create accounts and complete safety inspections. “It’s not reasonable to expect a landlord to wait 50 to 60 days,” acknowledges Ben Goldsmith, a volunteer tenant organizer with the Chicago Housing Initiative. It’s a problem that “leads to homelessness or lack of choice for the [voucher] recipient,” he adds.

The safety inspections are also a sticking point. HUD requires landlords who accept federal housing vouchers to submit their units to regular inspections and to make improvements when necessary. Landlords say the process can be time-consuming and costly. But advocates argue that housing agencies’ requirements are often less onerous than municipal ones. “To say, ‘I don’t want to do the inspection process’ is like saying, ‘I don’t want people to catch me breaking the law,’” says Isaac Sturgill, a North Carolina housing attorney.

If a landlord fails to make required improvements, the local housing agency can stop issuing payments. That makes sense on some level—the government shouldn’t pay landlords for unsafe units. But it often leaves voucher recipients in the lurch. That’s what happened to Shanna and Lavi Lee in November. When the inspector found mold in their home and her landlord failed to address the problem, the agency stopped paying the rent. Shanna, unable to make up the difference in rent, was evicted. She and Lavi had no place to go and nowhere to put their furniture. “I had to put it out on the street and let trash take it,” Lee says.

Local housing agencies are trying to make the program more appealing to landlords. For example, Charlotte’s public-housing agency, which was recently rebranded as Inlivian, now offers cash incentives. Landlords get $250 upon signing a lease with a voucher recipient, and $1,000 risk-mitigation awards if recipients damage their property. Some local governments are also ramping up efforts to outlaw discrimination based on where tenants’ rent comes from. Over the past couple of decades, more than a dozen states and nearly 90 cities and counties have passed so-called source-of-income protections, which forbid landlords from denying tenants based on that information, and Senator Kaine reintroduced a bill that would outlaw such discrimination nationwide.

But if such laws are a step in the right direction, advocates say they’re not enough. Both Washington, D.C., and Newark, N,J., have source-of-income laws on the books, but the 2018 Urban Institute study found that 15% of Washington landlords and 31% of Newark ones still wouldn’t accept tenants with vouchers.

Last year, Tiana Martin, a federal employee, experienced this disconnect. After inquiring about a unit in Latrobe Apartments near Washington’s Dupont Circle, she received a text message from an employee of the firm that owns the building. “Unfortunately we do not accept Section 8,” the text read, according to a screenshot viewed by TIME. Latrobe’s website repeated the message: “We do not accept housing vouchers at this community.”

Martin, a black transgender woman, filed a discrimination lawsuit that’s now pending. “I know what it means to be discriminated against based on your gender, and now on my housing. I’m like, Dang, what else can they come up with?” she says. (Latrobe has since edited its website, and the firm that owns the building claims the agent who texted Martin was misinformed, according to a statement provided to Washington City Paper. Martin found a willing landlord in a different D.C. neighborhood.)

Charlotte doesn’t have a source-of-income law, so Lee couldn’t file suit even if she wanted to. The stress of dealing with her living situation is taking a toll. She was recently hospitalized for a thoracic aneurysm, which her physicians said was stress-related.

On a recent rainy morning in Charlotte, Lavi visited her aunt Shneila’s third-story walk-up so her mother could go to a doctor’s appointment. Shneila applied to at least six rental units before she found a landlord willing to accept her local housing subsidy. “Those two have compromised immune systems,” she says, pointing to two of her children, who were born prematurely. “I can’t bring them to a shelter,” she adds, too aware of how close she came. “We can’t be homeless.” 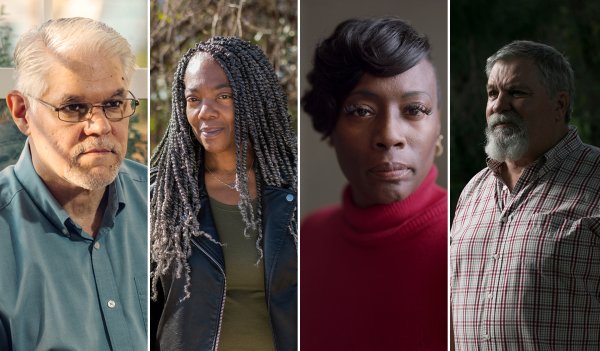 'No One Is Safe.' These Americans Share Their Struggles to Vote
Next Up: Editor's Pick