With Benjamin Netanyahu Out in Israel, What Comes Next for the Country?

Israeli demonstrators celebrate the passing of a Knesset vote confirming a new coalition government during a rally in Tel Aviv on June 13, 2021.
Jack Guez—AFP/Getty Images
Ideas
By Ian Bremmer
Bremmer is a foreign affairs columnist and editor-at-large at TIME. He is the president of Eurasia Group, a political-risk consultancy, and GZERO Media, a company dedicated to providing intelligent and engaging coverage of international affairs. He teaches applied geopolitics at Columbia University’s School of International and Public Affairs and his most recent book is Us vs. Them: The Failure of Globalism.

By a margin of 60-59, with one abstention, the Knesset, Israel’s parliament, has voted confidence in a coalition government led by conservative Naftali Bennett and centrist Yair Lapid. The dozen-year reign of Benjamin Netanyahu, known by friends and enemies alike as “Bibi,” as Israel’s prime minister is over. It took four elections over two years for opposition parties to defeat him. What comes next?

Eight political parties—representing the far left, far right, and an Arab Islamist party—will be part of a government led by Bennett as prime minister and Lapid as foreign minister. If this government is still standing in two years, Lapid is slated to replace Bennett as prime minister, and Bennett will become interior minister. Neither man can make a policy decision without approval from the other—and neither can fire the other. The eight parties that make up this “odd-bedfellows” coalition have two things in common: They wanted Netanyahu out of power, and they mean to keep him out. C’est tout.

To survive, this government will have to prove it can make life better for Israeli voters, including for Israeli citizens of Palestinian descent, whose continuing support will be crucial. Despite the inclusion of the first-ever Arab party within an Israeli governing coalition, there won’t be change at the top on security policy threats from Hamas. Any new aggression from Gaza will trigger forceful Israeli response. The coalition will also oppose U.S. re-entry into the Iran nuclear deal even as it works to smooth over troubled relations with U.S. Democrats. Instead, its focus will be on boosting the COVID-battered economy, creating jobs, investing in infrastructure, and reducing poverty—issues that won’t outrage left or right.

Since any one of these eight parties, which span Israel’s political spectrum, could sink the government by withdrawing support, it needs projects that have consensus within this absurdly diverse coalition itself. Restoring the basic functions of government would be a good start. The Knesset hasn’t passed a budget in three years. By November, we can expect a two-year budget that gives tax and spending plans a new sense of direction. In the meantime, after two years of inconclusive elections and political melodrama, many Israelis will welcome a return to some sense of normalcy.

Of course, no national government anywhere in the world gets to decide which issues it will face and which it will ignore. Unexpected events—and clever rivals—have ways of forcing political leaders and policy makers to grapple with controversies they’d rather avoid. Earlier this week, Hamas and Israeli forces again traded fire, reminding anyone just how fragile any ceasefire between these two sides can be. Jewish settlers continue to build on land in the West Bank that legally belongs to Palestinians. Leaders must make ugly choices, whether they want to or not.

Israel and the United States

There is an unavoidable comparison to be made not only between Netanyahu and Donald Trump, but between the new Israeli government and the Biden administration. Netanyahu’s response to defeat was not simply to deride the new coalition as a “government of capitulation” but to call his ouster the “greatest election fraud in the history of the country.” His attacks on liberal judges and journalists ring familiar, too. And the Bennett-Lapid government’s tiny majority, like the slim grip that U.S. Democrats have on the House and Senate, will empower every legislative ally to hold the new Israeli government’s most ambitious policy plans for ransom—though in Israel it won’t necessarily be centrists like West Virginia’s Senator Joe Manchin or Arizona’s Kyrsten Sinema that gum up the works. Challenges from within Israel’s governing coalition could come from the left, the right, or both.

And as with Biden, the political longevity of Israel’s new government may depend on the ability and willingness of the hated opposition to keep its own united front united. Just as Trump and his most vocal backers within the GOP help keep progressives and Democratic centrists joined at the political hip, so Netanyahu’s continued desire to command attention in Israel can help this government last longer than it otherwise might. And Netanyahu, like Trump, faces legal troubles that will keep his name in the headlines and his fists clenched. In Netanyahu’s case, the charges are bribery and fraud. “We’ll be back—and quicker than you think,” Netanyahu has tweeted. That might be the very best thing that can happen for Israel’s new anti-Bibi coalition. 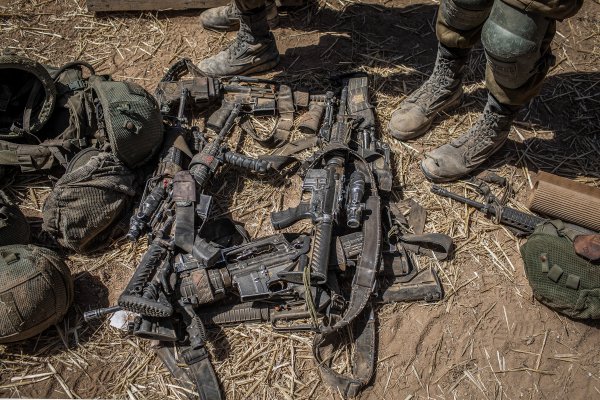 U.S. Military Aid for Israel Must Be Conditional
Next Up: Editor's Pick