Printing house employees work on a campaign billboard for Israeli Prime Minister and Likud Party leader Benjamin Netanyahu in central Petah Tikva in 2013.
Oded Balilty—AP
Ideas
By Dahlia Scheindlin
Scheindlin is a political strategist and a public opinion expert; she is also a policy fellow at The Century Foundation

There was a time when Benjamin Netanyahu knew how to exit the stage. On election night in 1999, after losing to Ehud Barak, Netanyahu congratulated the winner and called on his Likud supporters for calm and unity. He then resigned as the leader of Likud, and shortly afterwards, told the Israeli Knesset he was resigning as a lawmaker too. A T.V. announcer covering his departure from the Knesset observed: “Benjamin Netanyahu [is] in his final moments – unless history should put him back there.”

History put him back, and history is not yet done with him. After failing to win an outright victory over four election cycles, Netanyahu is now struggling mightily to sabotage a possible coalition of eight parties who oppose his leadership – some of them rightwing parties that formerly supported Netanyahu – before the “change” coalition is sworn in, a vote planned for Sunday.

Netanyahu has called the aspirational new coalition the “fraud of the century;” such a “leftwing” government, he fumed, would be “would be a danger to the security of Israel and to the future of the state, if god forbid, it is established.”

Furious rightwingers demonstrated at the homes of rightwing leaders planning to join the new coalition, calling them traitors and collaborators. On Saturday, the chief of Israel’s Internal Security Agency warned incitement could lead to physical attacks, and issued an unusual urgent call for politicians to oppose the trend.

Should the new government survive his efforts, Netanyahu will descend from the national stage. But his legacy will endure. Counting his three years as Prime Minister in the 1990s, Netanyahu has been in power for a total of 15 years. During that time, many believe Netanyahu re-made the country.

For example, Netanyahu has long boasted of his successful economic innovations and their results. From his time as finance minister from 2003 to 2005, Netanyahu began implementing the kinds of state cutbacks and privatization that made his name synonymous with “neo-liberal” economic policy in Israel.

Macroeconomic indicators such as GDP growth and unemployment have indeed been impressive through most of his term, buoyed heavily by the high-tech field, which shielded Israel from the worst of the COVID-19 crisis. Yet the data has a dark side: barely 10% of Israel’s work force is employed in high-tech, obfuscating rampant inequality, suffocating cost of living and prohibitive real estate prices for the middle class.

Netanyahu also took a sharp right turn away from a two-state solution with the Palestinians. Following a heavily qualified statement accepting two states in 2009, he dragged his feet in negotiations from 2013-2014, while presiding over creeping expansion of Israel’s control over the West Bank. He continued a de facto closure of Gaza punctuated by three wars on his watch – and from 2019, began openly advocating West Bank annexation. Public support for the two-state solution among Israelis declined nearly 30 points throughout his term, to just 44% by 2020. These surveys show that declining support is heavily correlated with declining belief that such a solution is feasible – a perception that rose under Netanyahu’s years.

Rather than just absorb pressure from Israel’s Western allies to resolve the conflict, Netanyahu re-focused Israel’s foreign policy. For years, he has cultivated friendships among the world’s most illiberal and authoritarian regimes, from Hungary and Azerbaijan, to India and Brazil; countries unlikely to prioritize human rights or international law.

At the same time, he moved towards illiberalism himself. His governments advanced laws targeting the Arab minority, constraining civil society and political protest. Facing legal challenges to such measures, often by civil society groups, his governments began attacking and seeking to constrain the judiciary as well. A broad anti-judiciary campaign ranged from a rhetorical populist attack on judicial elites crushing the will of the people, to attempts to allow the legislature to override the Supreme Court, limit access of petitioners or the court’s authority to rule on certain issues. His attacks on the rule of law didn’t stop there; in response to his own indictment and trial for corruption, Netanyahu personally unleashed scathing criticism at the police, the state prosecutor, and the judiciary at large for concocting politically motivated charges.

Read more: Why I Have Hope for Israel’s Future … Without Netanyahu

His legacy is profound. But at least as far as the state of Israel is concerned, Netanyahu didn’t invent any of these problems.

Economic liberalization began with Likud’s rise to power in 1977 and a decisive shift away from socialism, a process that continued apace under the Labor government of the early 1990s.

The image that Netanyahu alone destroyed the two-state solution ignores much of history. It was the Labor party that nurtured West Bank settlements in the first critical decade following 1967, and settlements have expanded steadily under every government since then. Israeli leaders formally supported the two-state solution only from 2000 to Netanyahu’s 2009 speech (by the 2013 negotiations, there is little evidence that Netanyahu actually intended to reach this solution).

Israel also had unsavory friends long before Netanyahu, from Romania’s Nicolai Ceausescu to Idi Amin of Uganda (for a time), and apartheid South Africa; Israel is accused of exporting weapons to both Rwanda and Yugoslavia during the genocidal wars there.

Even the high-stakes struggle over the Israeli judiciary and democracy predates Netanyahu. The primacy of civil law over divine sources has been a thorny problem for Israel’s most religious Jews since the state’s earliest years. Israeli settlers and supporters have chafed at occasional Supreme Court rulings restraining settlements or occupation practices.

The first justice minister to openly oppose judicial activism was appointed two years before Netanyahu returned to power. Yes,the controversy took a populist turn under Netanyahu. But the lack of agreement in Israel over the authority of a secular body grounded in liberal universalist principles and constraining government excesses reflects a deep conflict of identity going back to its founding.

Perhaps Netanyahu’s greatest sleight of hand was convincing Israel that everything that happened to it, good or bad, was his doing. If so, the trick might have cemented his downfall; the new government is reportedly planning to advance laws to introduce term limits, and other restrictions to deter Netanyahu from returning. Israel’s longest-serving prime minister will have his place in the history books. But Israel’s problems predate him — and will outlast him, too. 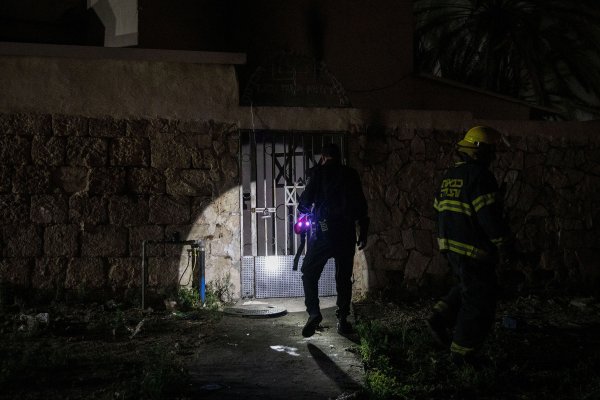 Jewish-Arab Tensions Rise in Israel's Mixed City of Lod
Next Up: Editor's Pick