They Shared a Video of a Muslim Man Being Attacked in India. Now They're Being Investigated by Police

Indian authorities have launched a fresh attack on freedom of expression, escalating a crackdown on press freedom and social media platforms. It’s yet another indicator that India, often called the world’s largest democracy, is lurching toward authoritarianism.

The trigger was a video of a violent assault on a Muslim man that went viral on Twitter, which ruling Bharatiya Janata Party (BJP) officials say was used to spread misinformation aimed at stoking religious tensions.

Late Tuesday night, Indian police opened an investigation into three Muslim journalists and three Muslim members of the opposition Congress party who had shared the video, along with Twitter and news site The Wire—one of the few media outlets in India that have remained independent.

India’s IT Minister also accused Twitter of failing to comply with the government’s new Internet rules on Wednesday, intensifying an ongoing confrontation that some observers have speculated could culminate in the social media platform being banned in the country.

The video in question showed a group of men attacking an elderly Muslim man in the state of Uttar Pradesh. The individuals named in the police investigation had shared comments from the victim, who said that his attackers had cut off his beard and forced him to chant “Jai Shri Ram” (Glory to Lord Ram), an expression that has become a rallying cry for Hindu nationalists, in a suggestion that the attack was religiously motivated. Many mainstream Indian media organizations also reported the victim’s comments but were not named in the investigation.

Police investigating the case denied that the incident was motivated by religion, saying Tuesday that some of the attackers were Muslim. In a statement announcing the investigation, police said that those named had “tried to create animosity between Hindus and Muslims,” and “did not make an attempt to establish the truth in the case,” adding that they had spread “false news.” Police said the six individuals would be investigated for several possible offenses including attempting to provoke a riot, promoting enmity between religious groups, public mischief, and criminal conspiracy.

The move has been heavily criticized by journalists and free speech organizations. “The accusation brought by the Uttar Pradesh police is based on absolutely no tangible element and clearly amounts to judicial harassment,” said Reporters Without Borders in a statement on Thursday. “Reporters Without Borders calls on the police of northern India’s Uttar Pradesh state to immediately withdraw the absurd charges.”

In a statement to TIME, the Uttar Pradesh state government said a police inquiry had shown the victim had not been forced to chant any religious slogan, and that the victim and the accused were known to each other. Police had opened the investigation into people who shared the video “to prevent communal polarization and avert any untoward incident,” the statement said. Those named in the investigation, it said, were “people who had launched an agenda driven distorted and baseless campaign against UP Government, a media house and … Twitter India.”

“The Government of UP places absolute sanctity to rule of law, civil liberties and freedom of expression & the [investigation] against the above individuals has not been lodged due to any witch-hunt,” the statement said.

One of the journalists named in the police investigation was TIME and Washington Post contributor Rana Ayyub, an award-winning journalist who recently reported from overstretched Indian hospitals for a TIME story arguing that governmental failures were to blame for the country’s devastating second wave of COVID-19. Others include Mohammed Zubair, the co-founder of fact-checking website AltNews, which regularly debunks misinformation shared by the government and its supporters, and Saba Naqvi, an author and journalist. The other three people named were members of the opposition Congress party.

Rana Ayyub speaks during the launch of her book 'Gujarat Files' in New Delhi on May 27, 2016.
CHANDAN KHANNA/AFP via Getty Images

In an interview with TIME, Ayyub said that, while the victim’s comments that the attack was religiously motivated had been reported by many newspapers across the country, she believed police had targeted her and other prominent Muslims in order to intimidate them. “It shames the Indian government that they are targeting journalists for reporting basic facts,” Ayyub says.

Press freedom in India has been rapidly declining, and the country now ranks 142 out of 180 countries on the Reporters Without Borders World Press Freedom Index. India’s government intensified its crackdown on journalists this spring, as it battled a devastating wave of COVID-19. Earlier this year, U.S.-based non-governmental organization Freedom House downgraded India’s democracy rating from “free” to “partly free,” citing attacks on press freedom as a contributing factor.

Read More: The Indian Government Is Silencing Critics Even As Its COVID-19 Crisis Surges

In a statement, The Wire said it stood by its reporting on the attack in Uttar Pradesh. “This is an attempt to criminalize the reporting of anything other than the official version of events,” the publication said in a statement, adding that its reporting was “based on accurate and truthful reports, by many media organizations, of what the victim of the crime has himself said about the incident.”

Ayyub, who is recovering from spine surgery, recently posted a message on her social media accounts saying she was going offline to rest and recover. She “had to get out of bed” to fight the latest allegations, she says, adding that she is in constant pain. “If I do go behind bars, I’ll keep fighting the good fight. Because they can’t chain my thoughts.”

In addition to police beginning an investigation into Twitter, India’s IT minister Ravi Shankar Prasad launched a scathing attack on the platform on Wednesday. In a series of posts that marked the sharpest escalation yet of tensions between the Indian government and Twitter in recent months, Prasad accused the platform of failing to comply with the government’s new social media rules that came into force in May.

Prasad suggested that Twitter’s “failure to act” on the implication that the attack on the elderly Muslim man was religiously motivated—what Prasad called “fake news”—was an example of Twitter only applying its rules “when it suits [Twitter’s] likes and dislikes.”

“It is astounding that Twitter, which portrays itself as the flag bearer of free speech, chooses the path of deliberate defiance,” Prasad said on Twitter.

Read More: India’s New Internet Rules Are a Step Toward ‘Digital Authoritarianism,’ Activists Say. Here’s What They Will Mean

The latest criticism comes after Twitter publicly refused to remove several tweets by journalists and political opponents in response to a legal demand by the Indian government in February, although it did agree to remove some others. In April, the government demanded Twitter and Facebook remove dozens of posts, including some by opposition lawmakers, that were critical of its COVID-19 response. Then, in May, Twitter labeled several tweets by members of India’s ruling party “manipulated media,” applying a policy that had first been designed to combat misinformation in the run-up to the 2020 U.S. election. In response, police visited Twitter’s New Delhi office with broadcasters in tow.

The Indian social media regulations that came into force on May 26 say social media companies must comply quickly with government takedown requests, and appoint a “chief compliance officer” who may be arrested if the rules are not followed. The government says the rules are designed to prevent “abuse and misuse” of social media by users.

In a statement to TIME, a Twitter spokesperson said the company has appointed an “interim” chief compliance officer, adding that “Twitter continues to make every effort to comply with the new Guidelines.”

According to Aatish Taseer, a British-American writer who had his Overseas Citizen of India (OCI) status revoked soon after he authored a TIME cover story that was critical of Indian Prime Minister Narendra Modi, the government’s recent measures against Twitter and journalists are part of a broader project to stifle dissent. (The Indian government says his citizenship was revoked for a different reason: that he “concealed the fact that his late father was of Pakistani origin.”)

Read More: I am Indian. Why Is the Government Sending Me Into Exile?

Taseer believes the Indian media are increasingly in thrall to the Hindu nationalist BJP. “Twitter remains one of the few avenues where people like Rana and [Mohammed] Zubair can speak and be heard and set the record straight,” he says. “So it really is a concerted attack.”

Ayyub agrees. “It seems like the government is killing two birds with the same shot,” she says. “They are targeting journalists and also social media platforms, which have made sure that people with divergent views can tweet out their critical views of the government.”

Still, Ayyub is defiant. “The government should know that I do not fear them arresting me,” she says. “I will keep speaking the truth no matter what happens.”

This story was updated on June 18, 2021, to include a statement from the Uttar Pradesh state government. 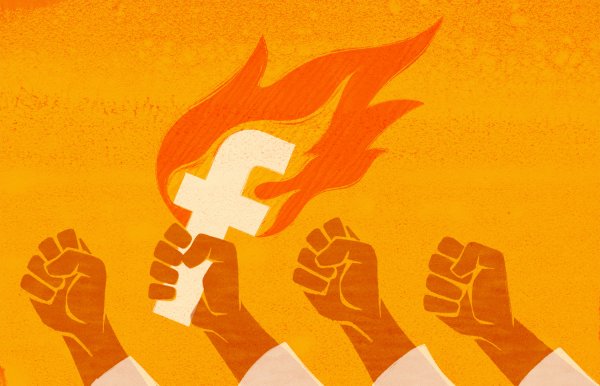 Why Facebook Left an Extremist Network Online
Next Up: Editor's Pick