The G7 Want to Save the World from Climate Change. But Are They Willing to Pay for It?

The weather forecast is sunny this weekend in Cornwall, the picturesque corner of southwest England that will host the G7 summit from Friday to Sunday. At first glance, the outlook for the climate at the summit seems unusually bright too, with the world’s seven largest advanced economies promising to create a “greener, more prosperous future” as they recover from COVID-19.

Climate change has finally cemented its place at the top of the agenda for international diplomacy in recent months, and with President Joe Biden in office, all members of the group of seven—the U.S., Italy, France, Germany, the U.K., Canada and Japan—are aligned on the urgency of the current moment for the first time. In a pre-summit gesture in May, the group agreed to end their financing of overseas coal projects—a long-awaited goal that will sharply reduce prospects for the dirtiest fossil fuel.

Crucially, these wealthy countries are not only uniting on similar narratives on climate, but also beginning to see the geopolitical advantage of strong climate action. For the Biden administration, which is trying to pass a raft of pro-climate measures at home, international climate action is a chance to heal the tattered U.S.-E.U. relationship. More broadly, it offers Biden the chance to, as he writes this week in the Washington Post, prove the capacity of “democratic alliances and institutions that shaped so much of the last century against modern-day threats and adversaries.”

The U.K. is also using the climate crisis to its advantage. As host of both the G7 and the high profile U.N. COP26 Climate Summit in November, Prime Minister Boris Johnson has been proudly touting the U.K.’s world-leading goal of reducing its greenhouse gas emissions by 78% in 2035 compared to 1990 levels. In a post-Brexit world, and after early mismanagement of COVID-19, perceived climate leadership could help the U.K. to answer the question of “who is Britain now, after all these changes?” says Samantha Gross, a fellow of the Brookings Insitute’s foreign policy program and director of its Energy Security and Climate Initiative. “They want to say, ‘hey, we’re still a world leader.’”

The E.U., which has in recent years positioned itself as a global climate leader, understands the competitive advantages of such a status. Germany, its largest economy, is pouring $10 billion into green hydrogen projects to stake its claim in a rapidly growing sector. China has also approached the E.U. for advice on how to decarbonize, Gross says, as it prepares its own emissions trading system. Aside from adding a more constructive element in the West’s increasingly troubled relationship with China, such climate collaboration may one day bear trade benefits.

But, although it’s promising that the world’s richest nations want to be leaders on climate, if they want the rest of the world to buy it—and if Biden wants to counter China’s growing influence in Asia, Africa and Latin America—the G7 needs to do more to turn words into action this weekend and over the next few months.

“As a whole, the G7 is not standing as the leaders of the world that we expect them to be, given the advantages they have in terms of spending,” says Brian O’Callaghan, lead researcher at the Oxford University Economic Recovery Project. “This is the biggest opportunity countries have ever had to spend on climate, and” —with political pressure to curb public spending likely to increase sharply in the years following the pandemic— “perhaps one of the last significant opportunities for quite a while.”

So far, many are wasting that opportunity. Between January 2020 and March 2021, the G7 attendees—which this year also include Australia, India, South Korea and South Africa — together spent $189 billion on fossil fuel projects and just $147 billion on clean forms of energy, according to analysis by the International Institute for Sustainable Development (IISD). Less than a fifth of fossil fuel spending came with conditions that would force industries to make specific changes or adopt stronger climate targets.

That doesn’t mean the idea of a green recovery is dead, says Lucile Dufour, a senior policy advisor at the IISD’s energy program, who wrote the analysis. The U.S., for example, has been the largest spender on fossil fuels during the pandemic, she says, but it would tip the G7’s spending balance in favor of clean energy if Congress passes the American Jobs plan—which proposes hundreds of billions of dollars of investments in infrastructure that will reduce U.S. reliance on fossil fuels—without further watering it down. “We are at a crossroads right now because in the next couple of months, a lot more recovery plans are going to be adopted,” Dufour says.

For many observers, the G7’s credibility as world leaders will depend on whether or not they cough up money that poorer countries badly need to overhaul their economies and infrastructure to reduce emissions and adapt to the shifting climate. The world’s developed countries pledged in 2015 to raise $100 billion in this kind of climate financing for developing countries each year from 2020 onwards, recognizing that climate change has largely been caused by the emissions of wealthier countries. The most recent numbers suggest that they are falling $20 billion a year short of that goal. Only a fifth of current spending is directed to adaptation, and the rest towards emissions reductions, even though the promise was for a 50/50 split.

A June report by Danish charity Care International found that only three countries—the U.K., New Zealand and Luxembourg—have announced plans to increase their spend, meaning international climate finance would increase by just $1.6 billion in 2021 and 2022. It called on G7 countries to double their international finance by 2025. With huge pressure for G7 countries to spend domestically at the moment, Gross says a big part of the finance they mobilize will likely be private, through tools like guarantees to remove risks for businesses that invest in developing countries.

As climate change increasingly drives sea-level rise and hugely destructive storms, and disrupts agriculture, the underfunding of climate adaptation is becoming a clear moral failing of rich countries, and a major bone of contention between developed and developing countries.

But failure to provide climate financing would also be a geopolitical risk. Take the G7’s pledge to end overseas coal funding. Analysts say it could pressure China to follow suit. But if wealthy countries don’t rapidly replace coal funding with ambitious investments in clean energy, developing countries may be forced to go to China for fossil fuel projects to boost their COVID-19 recoveries and protect their energy security.

Climate migration is also a concern. Extreme weather events and natural disasters displaced three times as many people as conflict did in 2020 and the U.S. is witnessing the consequences at its southern border, where hurricanes Eta and Iota have helped to cause a surge in arrivals from Central America. Though most climate migrants move within their own country, the phenomenon will drive disruption, instability and conflict around the world.

As the G7 crafts a joint response to climate change through the COVID-19 recovery, it might learn from another organization with which it shares common roots. Both the G7 and the Paris-based International Energy Agency (IEA) were originally formed in the wake of a 1973 oil price surge, as wealthy countries sought to protect their economies and energy security. Last month, the IEA published a landmark report that suggested a roadmap for the world to keep climate change at bay, including a radical proposal: countries need to end investment in new oil or gas fields and in coal plants, not within a certain number of years, but now, in 2021.

The proposal faced pushback from Norway, Australia and Japan, who said such a move would leave them without enough fuel to keep the lights on during the energy transition. IEA director Fatih Birol responded that countries were “missing the point” on security. Though transitions to clean energy “won’t succeed if they undermine the supplies of energy that billions of people rely on,” he wrote, “A world ravaged by climate change from fossil fuel emissions won’t be secure.”

Rich countries don’t face a choice between protecting the world from climate change and protecting their energy security and their place in the world. None can be achieved without the others. That will require radical, ambitious—and expensive—action. 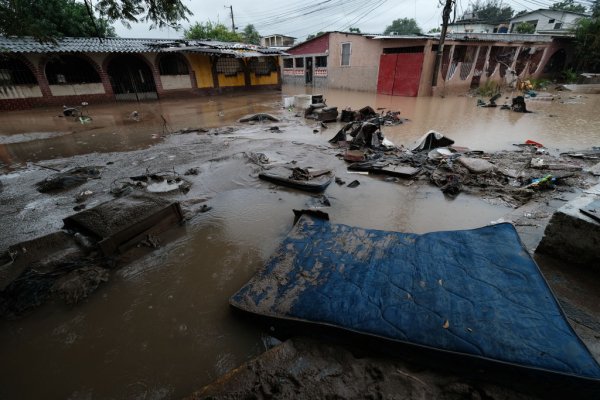 The Start of Hurricane Season Brings Anxieties to Central America, Still Reeling From Last Year's Disasters
Next Up: Editor's Pick