Naomi Osaka speaks after winning her women's singles semifinal match against Jennifer Brady on day 11 of the 2020 US Open at the USTA Billie Jean King National Tennis Center in New York City on September 10, 2020.
Al Bello—Getty Images
By Sanya Mansoor

During this year’s U.S. Open, professional tennis player Naomi Osaka wore seven different face masks for each round of the annual tournament. Each mask, which she started wearing when the tournament began on Aug. 31, named a Black person whose death has been repeatedly cited in nationwide protests about racial injustice.

After winning the U.S. Open’s singles tournament on Saturday, Osaka said the masks were her way of using her platform to protest this injustice and advocate that Black lives matter.

Asked by a reporter after the tournament what message she wanted to send, Osaka responded: “Well, what was the message that you got was more the question. I feel like the point is to make people start talking.”

Osaka isn’t the only champion competitor to use their platform to try and keep Black names in the public consciousness. On Sunday, British Formula One driver Lewis Hamilton, who is considered one of the best drivers of all time, also signaled his support for Breonna Taylor. He wore a T-shirt calling for the arrest of the police officers who killed Taylor after winning the Tuscan Grand Prix at Mugello, Italy.

Earlier in the U.S. Open, Osaka was given messages from Trayvon Martin’s mother and Ahmaud Arbery’s father, thanking her for raising awareness.

Osaka said in a press conference earlier this week that she was “trying really hard not to cry” when she heard their message.

“I’m not sure what I would be able to do if I was in their position but I feel like I’m a vessel at this point, in order to spread awareness,” Osaka said. “It’s not going to dull the pain, but hopefully I can help with anything that they need.”

Osaka, born to a Haitian father and Japanese mother, was brought up in the U.S. but plays for Japan in the U.S. Open. It was her second U.S. Open win and her third Grand Slam title. 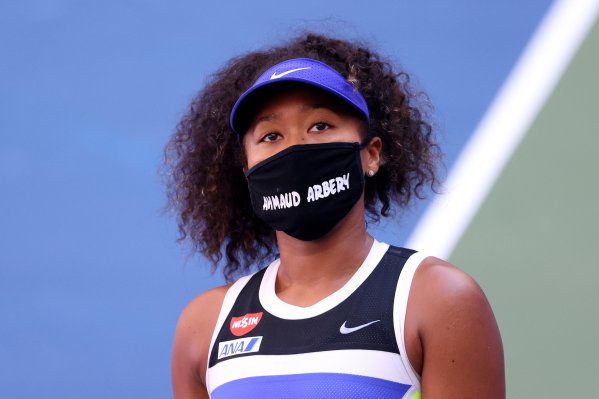 The History Behind Naomi Osaka's U.S. Open Masks
Next Up: Editor's Pick