The U.S. Vaccination Effort Is Leaving Its Most Vulnerable Residents Behind

With every person who gets vaccinated, our communities become that much better protected against COVID-19. However, that bubble of protection isn’t being shared across the United States equally—and some of the most vulnerable people are getting left behind, even as 51.9% of the population is fully vaccinated as of June 2.

A U.S. Centers for Disease Control and Prevention report published May 28 found that people who live in counties considered the most socially vulnerable are only 42% vaccinated, compared to 60.1% among residents of the least vulnerable counties. The researchers based their work on the CDC’s social vulnerability index (SVI), which ranks U.S. counties by socioeconomic status, household composition, racial and ethnic makeup, transportation access and more.

The SVI-based vaccination gap is most pronounced in suburban and rural areas, the researchers found, and has worsened over time. Vaccination rates across counties of all vulnerability levels were similar in December, when the U.S. mass vaccination campaign began. But by May 1, the vaccination rate was just 49% in the most vulnerable counties, compared to nearly 60% in the least vulnerable.

Vaughn Barry, one of the study’s lead authors, said that he was surprised to see disparities grow even as vaccine eligibility and access expanded. “It just demonstrates again how important it is for all people to receive the COVID-19 vaccine when it is available to them so that we can continue taking steps towards ending the COVID-19 pandemic,” he said.

That people in vulnerable rural counties are relatively under-vaccinated is particularly troubling, as many of the U.S.’ rural poor are at greater risk of severe COVID-19, and have been disproportionately affected by the disease. By early December, 1.86 residents of rural areas died for every 100 people infected, compared to 1.26 in urban areas, according to U.S. Department of Agriculture data.

Vaccine hesitancy is almost surely playing a big part in the vaccination gap. Twenty-four percent of rural Americans say they definitely won’t get the vaccine, compared to 15% of suburban people and just 7% of urban residents, according to a May KFF survey. At least some of this disparity likely comes down to politics. Rural Americans are more likely to lean Republican, and 27% of self-identified Republicans say they don’t want to be vaccinated, compared to 11% of Independents and just 3% of Democrats, per the KFF survey.

Access, too, is likely playing a role. A February analysis from University of Iowa researchers found that 111 rural U.S. counties lack a pharmacy that was eligible to provide COVID-19 vaccines, and a further 307 counties had only one such facility. And as a separate recent CDC report shows, as of April 10, residents of rural and urban areas were more likely than suburban people to have traveled to a different county to be vaccinated.

Still, Vaughn notes that getting half of U.S. adults vaccinated in five and a half months is “great progress.” Now, he says, public health officials must address disparities by collaborating with local leaders and health care providers, opening mobile and walk-in vaccination clinics, and tailoring messaging to local communities. 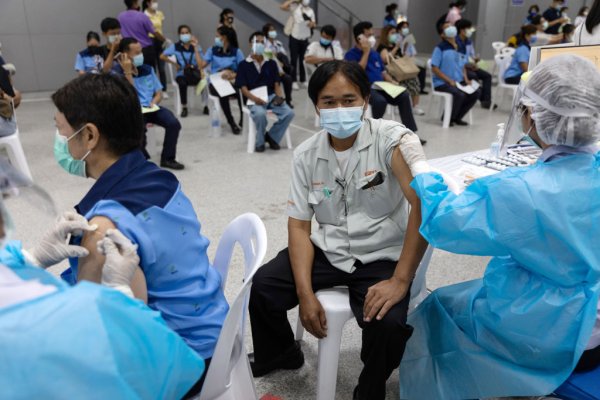 How COVID-19 Is Revolutionizing Health Care Around the World
Next Up: Editor's Pick