In the Noirish Modern Fairytale Undine, a Mermaid and a Man Find Happiness—for Now

If you’re in the mood for a noirish modern fairytale laced with introspective observations of both modern Germany and the Germany of the past, have I got a movie for you. Christian Petzold’s Undine is a moody reimagining of the myth of the same name, in which a mermaid who appears human while on land strikes a bargain with the man she loves: if he’s unfaithful, it will be her duty to kill him. Petzold has made some of the most captivating pictures to come out of his home country in the past decade, among them Barbara (2012), about a doctor in 1980s East Germany who’s exiled to a provincial hospital, and Phoenix (2014), in which a disfigured Holocaust survivor undergoes plastic surgery before beginning a search for her lost husband. Undine continues in that vein, and it hooks you in right from its classic, breakup-at-the-café start: We see a man (Jacob Matschenz) crushing the heart of a woman (Paula Beer) by telling her he’s met someone else. Her suffering nearly breaks through the nerve endings of her skin. She also informs him, solemnly, “If you leave, I’ll have to kill you. You know that.” And she means business.

But that promise—or threat—lies unfulfilled. The woman, Undine, goes across the street to her job—she’s a historian who gives presentations about the architecture of Berlin to tourists—but orders the man to wait. She’ll come back on her break, and they’ll talk further. When she returns, he’s gone, and by happenstance, she meets perhaps the true love of her earthbound life, a professional diver named Christoph (Franz Rogowski). In a symbolic and literal crash, a nearby aquarium shatters, anointing the newfound lovers with water and fish and broken glass. For Undine, it’s a second chance with a new lover, a gentle soul who adores her. But there’s a price attached—because this is, after all, a story based on a mythical transaction.

Petzold loves his romantic bargains, his meditations on longing, obsession and deceit, and he unfurls all of that seductive cloth of gold in Undine. Rogowski and Beer, perceptive actors with searching, expressive faces, also starred in Petzold’s intriguing 2018 film Transit, in which a German political refugee in a modern version of occupied France falls in love with the wife of a dead man—a man whose identity he has adopted. By now, even if you’ve never seen a Petzold film, you have a sense of where he’s coming from. In addition to garden-variety deep thoughts, his movies are also laced with ruminations on where Germany has been, and where it’s headed. Here, Undine herself is the conduit for those ideas: In her lectures, she speaks of a city that’s half a ghost, bisected by a nearly insurmountable wall for nearly a third of the last century, and today a place where the old and the new have blended, not always imperceptibly.

Undine is also a story of things—and people—breaking apart and being mended, and making their way toward reconciliation, if not necessarily what we think of as happiness. Then again, most versions of happiness, like the legend of Undine itself, are a myth. That’s not because happiness is unachievable, but only because, like water, the more we try to hang onto it, the more readily it slips through our fingers. 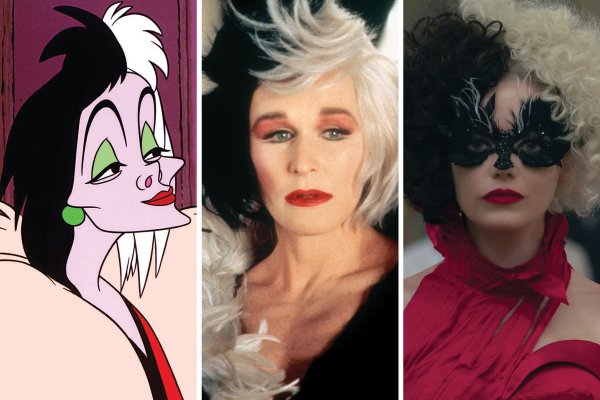 The Origins of Cruella de Vil
Next Up: Editor's Pick